Antibodies or immunoglobulins are proteins made ​​by the immune system in response to alien(!) molecules. Each antibody binds to its specific antigen. This great diversity and specificity is cause of diversity in Antigen Binding Site of heavy chain and light chain of antibody. Although other sections of Antibody are highly stable, Binding sites are very mutant. What is the reason for this difference in mutation rates in different parts of antibodies?

The processes are called gene rearrangement and somatic hypermutation, and are used by maturing B-cells to generate very (very) large amounts of diversity in the antibody repertoire. If your institution has access, this great article in Annual Reviews in Immunology has all the details, or you can read about it in Janeway (slightly outdated edition). Essentially, the genes encoding the B-cell Receptor, or BCR, have many fragments of several different types in them, and through the process of gene rearrangement the final Complementarity Determining Regions, or CDRs (the antigen-binding sites), are generated into one mature sequence for each individual B-cell.

A mature IgG molecule (the soluble, secreted version of the BCR) contains four chains - 2 heavy (each of which are identical to each other) and 2 light (also identical). There are Constant or C regions in each chain that essentially don't vary much, and are not really involved in the process of antigen binding. On the "business end" are three regions (or types, from above) called V, D, and J in the heavy chain, while the light chain just has V and J. Those letters are from Variable, Diversity, and Joining, if you're interested. 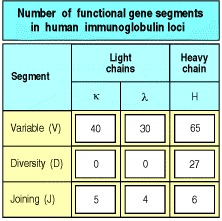 Figure 4.3 from Janeway shows the number of "fragments" or gene segments of each type in humans. So, when the heavy chain is being made, 1 fragment out of 65 Vs is picked, 1 of 27 Ds, and one of 6 Js, then each is joined together in a process that can also introduce an additional amount of randomness at the joins. Combine this with an only slightly less complex process in the light chain (as there is no D region), and the fact that a single insertion/deletion of a base pair can drastically effect the resulting protein sequence, and you get a protein with a huge number of possible sequences, potentially in the range of 1011.

This process of gene rearrangement typically generates immunoglobulins with relatively low affinity for their antigens. During affinity maturation, a process called somatic hypermutation randomly changes individual base pairs (translated to amino acids) in the CDR in cells that are descendents of, and bear the same base sequence as, the original. Cells expressing antigen receptors that are of higher affinity are then positively selected and clonally expanded by the immune system, allowing your body to tailor its response to an infection or other exposure to what it sees as foreign material.

The second source of variability is the "sloppy joining" of the V (D) and J segments. This results in frame shifts together with short deletions and insertions. This V(D)J junction corresponds to the third hypervariable region of the variable domain.

Each immature B cell displays its antibody at the cell surface as a membrane-bound form of IgM. If an antigen binds to this antibody the cell is stimulated to divide (clonal selection). During the proliferation of the immature B cell it undergoes somatic mutation due to error-prone replication of the Ig loci. This allows for the production of Ig variants with improved binding affinities which are in turn stimulated to proliferate more rapidly, eventually maturing into antibody-producing plasma cells. This somatic mutation is the the third source of variability in the variable domains of Ig molecules.

See any immunology textbook for details and diagrams.

Not the answer you're looking for? Browse other questions tagged immunology mutations antibody binding-sites or ask your own question.