Do adult mosquitoes have color preferences?

Do adult mosquitoes get particularly attracted or repelled by any colour, or darkness or light? If so, what are they?

"Mosquito" is a quite broad term, since it englobes several Genera and more than 3500 species. But, at least for some Genera, there are indeed colour preferences.

For instance, Aedes seems to have colour preferences. Have a look at this table from Gjullin (1947), from a research in which the effect of different coloured clothing on the biting rate was investigated: 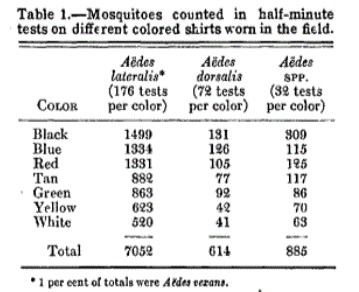 As you can see, black is the new black for Aedes mosquitoes. At least in the shirt of their victims.

Also, in his paper from 1903, Alpheus Packard describes an interesting experience, this time with Anopheles:

In continuation of their researches on the structure and biology of Anopheles maculipennis, the commonest British mosquito and one known to convey malaria, Dr. Nuttall and Mr. A. E. Shipley observed some interesting facts on the preference this species exhibits for different colors and for different shades of color. The experiments were conducted as follows : In a spacious photographic studio a large muslin tent was set up with one end against the glass window through which the sunlight poured. At the bottom of the tent were some large pans for the Anopheles to breed in, and these were from time to time renewed.

The mosquitoes were fed on bananas, which, it may be noted, must be kept fairly fresh, otherwise dates or figs are preferable. On one side of the tent seventeen boxes without lids were piled one upon the other, the order being changed each day so as to eliminate any preference due to position or exposure to light. Each box was lined with a cloth having a slightly rough surface — not a shiny or smooth one — to which a mosquito could easily cling. The experiment consisted in counting the number of mosquitoes found in each box on seventeen different days.

The results obtained are striking. During the seventeen days on which the count was made, 108 mosquitoes were found in the navy-blue box, 90 in the dark-red box, 81 in a reddish-brown box, 59 in the scarlet box, and 49 in the black box. There was at this point a sharp drop to 31 in a slate-gray box and 24 in an olive-green box. Violet, leaf-green, and full-blue boxes had respectively 18, 17 and 14. Pearl-gray had 9, pale green 4, light-blue 2, ochre and white 2 each, orange I, and pale yellow about the color of khaki none at all.

It is thus evident that color has a marked power of attracting this species of mosquito, and that the color which is by far the most attractive is navy-blue. In both services and equally amongst civilians this is a very common, perhaps the commonest, color for male attire. The experiments just quoted show that it is at least equally popular with malaria-carrying mosquitoes. Light colors were avoided, especially those with a tinge of yellow. Khaki-colored garments would seem to have other advantages besides that of invisibility on a light soil.

Night-time mosquitoes sense IR, UV and CO2 and aromatics as well as colors. Mosquitos can smell blood through the skin too. https://www.asianscientist.com/2015/10/in-the-lab/mosquitoes-detect-veins/

Black converts the most sunlight to infra red, and white does the least.

2009 Significantly more Anopheles quadrimaculatus females were aspirated from resting boxes fitted with red and IR LEDs than from those with blue or green LEDs, or from the unlit control https://www.ncbi.nlm.nih.gov/pubmed/19852218

Section analysis of the mosquito eye conducted by Kay et al. revealed its sensitivity to ultraviolet (UV) rays. Shimoda et al. used LED light sources with low energy consumption and specific wavelengths to pest control7. Field and laboratory investigations into mosquito response to artificial light have shown, that blue and green light is often more attractive than that in the yellow-orange and red regions of the visible spectrum. https://www.nature.com/articles/srep40074 strobe/fast on and off of the lights caused 2.5 times more mosquitos to be trapped.

Short answer
Mozzie preference to colors depends heavily on the species under investigation, as well as the specific preference test used.

Background
Mosquito color preference has been investigated mostly by investigating their preference of oviposition (the process of laying eggs).

Light-trapping has also been used by putting LEDS in traps and see how many mozzies are caught. Here, shorter wavelengths are associated with higher preference (red < green < blue) in Coquillettidia perturbans, but Culex nigripalpus, Culex tarsalis, Culex quinquefosciatus and Anopheles sierrenis show no preference whatsoever. Anopheles stephensi however, is highly attracted to UV, but blues, greens, and yellows were less attractive as a clear light bulb (Burkett, 1998.