Why does excess dopamine activity in the pleasure centers results in less pleasure in schizophrenics?

I am not sure what the cause of anhedonia (reduced interest), one of the negative symptom of schizophrenia. If nucleus accumbens plays a role in the reward system and there is an excess of dopamine, isn't it the case that there should be an increase in interest, that is, no anhedonia?

Short answer
The dopamine hypothesis includes brain regions with reduced dopamine transmission as well. The prefrontal cortex in specific has reduced dopaminergic activity and is implicated in anhedonia. It affects pleasure seeking behavior through interactions with the nucleus accumbens.

Background
The negative symptoms of schizophrenia are less well understood as the positive counterparts. One thing is for sure, the dopamine hypothesis cannot explain everything. It is a very useful working hypothesis, but primarily based on the first generation antipsychotics such as haloperidol with mainly dopaminergic mechanisms of action. In turn, these drugs mainly and effectively target the positive symptomatology (excessive dopaminergic transmission).

In fact, the dopamine hypothesis has been improved and adjusted during decades of intensive research. One of the important things that has come out of this is that dopamine neurotransmission is regionally affected, with a prefrontal hypodopaminergia (prefrontal cortex, or PFC and a subcortical hyperdopaminergia (e.g. in the pleasure centers). An excellent review of the historic developments in the dopamine hypothesis was published by Howes & Kapur (2009)

Now on to anhedonia. Pleasure perception per se seems largely unaffected in schizophrenic people, it is the anticipation of pleasure that seems negatively affected. This is accompanied by reduced motivation and goal-directed actions to seek pleasure. Anhedonia is primarily attributed to disturbed interactions between the ventral (nucleus accumbens) and dorsal striatum (mainly the caudate) and the PFC and not so much in the experience of pleasure per se. In addition, insular cortex, amgydala and hippocampus may be involved. A dysfunctional coupling between the anterior cingulate and the insular cortex (the “salience network”) has also been linked to the failure to appropriately process reward in schizophrenia. Lastly, goal-directed actions needed to obtain the reward and dependent on the PFC is dependent on not only dopaminergic, but also adrenergic and other mechanisms. This is all nutshelled information and I would encourage you to read Milan et al. (2014), who have written an extensive and excellent review focusing on anhedonia in specific as a negative symptom. Fig. 1 is obtained from that paper and shows the complexity of anhedonia. 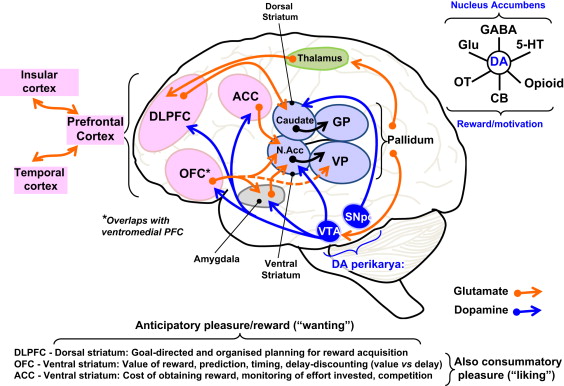 4
Why is dopamine or a dopamine-receptor agonist not pumped into the brain of Parkinson patients?
2
How long does it take for a blocked dopamine receptor to be broken down by the body?
0
Why didn't the human Cerebrum evolve to have granule cells like the Cerebellum does?
2
How does the dopamine spike from drugs compare quantitatively to pleasurable non-drug activities?
1
Why does it take so long for the human brain to develop from an evolutionary point of view?
4
Why do women have less synapses / neurons / brain mass than men despite having the same average IQ?