Is the Opah a warm blooded fish?

In 2015 many sources, including USA TODAY, Discover Magazine, and National Geographic, ran stories about the Opah fish (Lampris guttatus) being warm blooded. 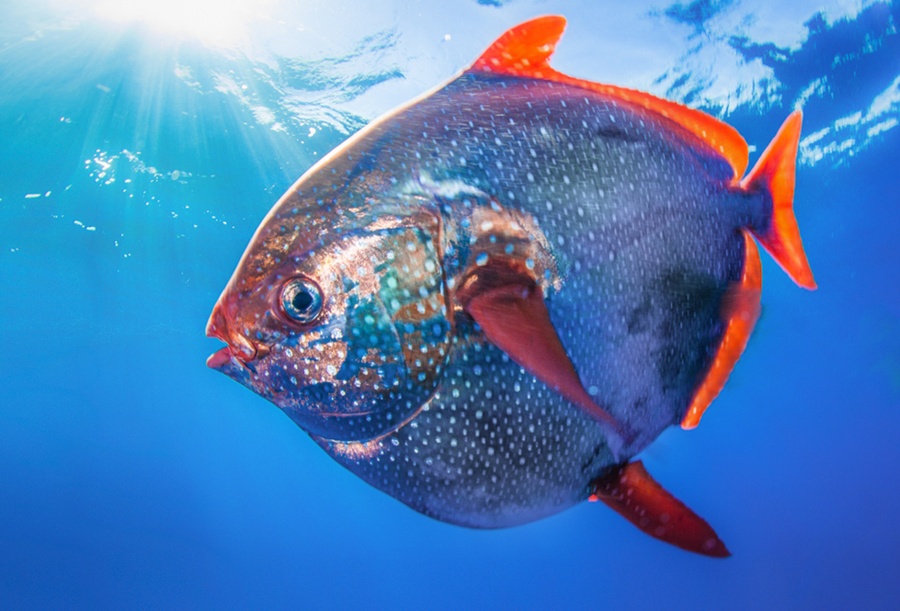 In a discovery that defies conventional biology, a big fish that lives deep in the Pacific Ocean has been found to be warm blooded, like humans, other mammals and birds.

Article from National Geographic 5/14/2015: Meet the Comical Opah, the Only Truly Warm-Blooded Fish

The opah’s wonderful nets are in its gills, and that makes all the difference. The blood vessels carrying warm blood from heart to gills flows next to those carrying cold blood from the gills to the rest of the body, warming them up. So, while a tuna or shark might isolate its warm muscles from the rest of its cold body, the opah flips this arrangement. It isolates the cold bits—the gills—from everything else.

This allows its huge pectoral muscles, which generate most of its heat, to continuously warm the rest of its body. It also keeps that heat with the help of thick layers of fat, which insulate the heart from the gills, and the pectoral muscles (which produce most of the animal’s heat) from the surrounding water.

According to the Merriam-Webster Dictionary warm blooded is defined as:

having warm blood; specifically : having a relatively high and constant internally regulated body temperature relatively independent of the surroundings

Did you say warm-blooded?

Despite the definition you cite from Merriam-Webstre Dictionnary, the term warm-blood is very unclear. The correct terms are endo-, exo-, poikilo- and homeo- therm. In short…

Variation in inside temperature

Any combination of these two axes exist. For example: If the temperature in the environment never varies you can be homeotherm without needing to be endotherm. Also, some organisms manage to keep a quasi constant body temperature via behavioural actions (moving to the sun when cold, going into the water when it's hot). A fun example (although debated to what I've heard) are the large dinosaurs that are thought to be homeotherms because their metabolism produce some heat and they are so large that they remain warm thanks to this heat source. However, they were probably not able to regulate actively their temperature. Therefore, I would tend to qualify dinosaurs as homeo-exo-therm but I wouldn't be surprised if someone prefers to call large dinosaur homeo-endo-therm individuals.

From what your second quote, it sounds like the Opah fish is endotherm. It is unclear from the quotes whether Opah fish are homeothermic.

Wegner et al. (2015) is a great read on the subject. Below is their abstract but I recommend reading the whole paper, it is easy to read and is very short (3 pages).

Endothermy (the metabolic production and retention of heat to warm body temperature above ambient) enhances physiological function, and whole-body endothermy generally sets mammals and birds apart from other animals. Here, we describe a whole-body form of endothermy in a fish, the opah (Lampris guttatus), that produces heat through the constant “flapping” of wing-like pectoral fins and minimizes heat loss through a series of counter-current heat exchangers within its gills. Unlike other fish, opah distribute warmed blood throughout the body, including to the heart, enhancing physiological performance and buffering internal organ function while foraging in the cold, nutrient-rich waters below the ocean thermocline.

In the whole, paper, I could not find a mention of how much variation in body temperature there is. They highlight however that the point of such adaptation is for foraging in cold waters suggesting that they would just make a boost of temperature in extreme cases but not necessarily actively maintained a constant temperature otherwise. I would tend to think that Opah fish are much more variable than birds or mammals. To reinforce my believes, in the wikipedia > Opah fish it is written (without reference unfortunately) "The opah is not homeothermic like birds and mammals".

FYI, this answer was written by partially recycling this other answer of mine.

Not the answer you're looking for? Browse other questions tagged zoology physiology marine-biology or ask your own question.

5
What's the benefit of the average human body temperature?
6
Do mammals and birds have a common warm-blooded ancestor?

11
Will the "frog in boiling water not jumping out" work on warm blooded animals
18
Fish "coming back to life" after being frozen
8
Is there a relationship between efficiency of cellular metabolism and warm-blooded-ness?
2
What exothermic reaction distinguishes warm blooded animals?
3
What's the mechanism behind 'losing heat through your extremities'?
5
Is there an ideal evolutionary body?
2
What do bloodsucking animals actually feed on?