I try to understand details of the Needleman–Wunsch algorithm and use an example from the book [Nello Cristianini, Matthew W. Hahn. Introduction to Computational Genomics. A Case Studies Approach, www.computational-genomics.net].

To my opinion, the algorithm is described not very neatly, so the question arises.

The first step is clear: 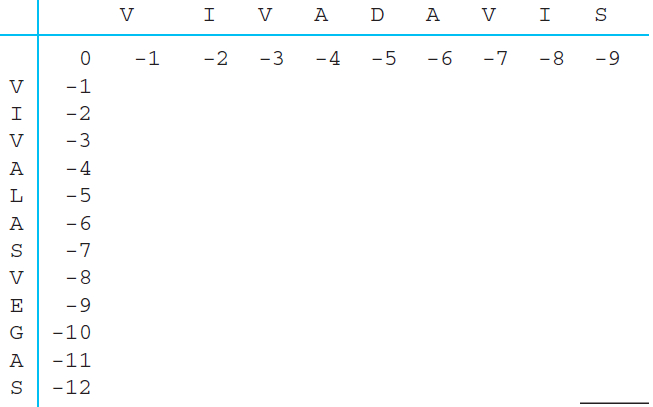 Also, the calculation of the score for diagonal neighbor is also clear, 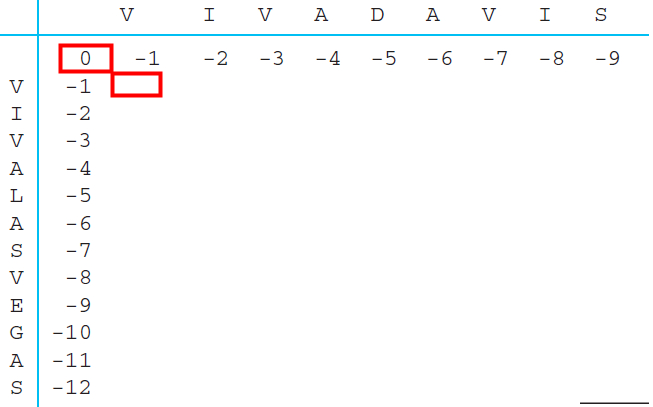 because this is an alignment without a gap:

Unclear moment is the alignment for left (or above) neighbor. Say, the left neighbor 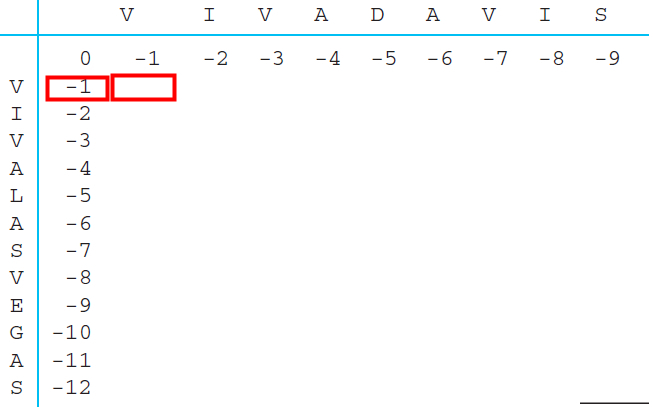 This is a classic application of dynamic programming in bioinformatics, and is one of the first dynamic programs that I was exposed to in university! Let's begin..

Step 1. Conceive of a scoring system.
Step 2. Create a table using the two character sequences.
Step 3. Iteratively fill in each cell, row by row, left to right. This is achieved by selecting the maximum (most positive) value coming from either:

(1) the cell that's located diagonally (top-left) to the current cell, plus the "cost" to align the two characters in consideration (cost value is obtained from scoring system).

(3) the cell just above the current cell, plus the gap penalty.

Again, the greatest (most positive) of these three [sum] values will be placed in the current cell.

For simplicity sake, and to remain true to your example, I'll define and use the following:

The character scores are potential alignment costs, and which to use is determined by if the two characters in consideration (row vs. column) are the same or not.

Let sequence 1 run along the rows of $T$, and sequence 2 run along the columns, as you already have. If $T$ is initialized with a value of zero at location (0, 0), then, in order to fill in the first row [going from cell (0, 1) to (0, 9)], since there are no diagonal cells that exist yet, nor is there yet a row above the current row, for all cells in the first row we will use the second option that was mentioned above to obtain each cell value. So then, with the gap penalty being defined as -1, the first row will range from 0 to -9.

Make sure to keep track of which adjacent cell was used to obtain the value for each cell. This descriptive will later be used to trace $T$ once it's completely filled out, in order to obtain the optimal solution. If you're writing this on paper, people usually just draw arrows (from current to adjacent cell), however, if it's on a computer, an adjacency matrix is created & filled in.

In cases where more than one adjacent cell yields the greatest value, draw an arrow to each one. This is to say that there can be more than one optimal solution.

Next, we start with the first cell of the second row. Since a left & diagonal cell doesn't exist, that omits options 1 & 2, and leaves only option 3, which yields a value of -1 (only gap penalty). And, as you maybe have noticed by now, this behavior will always be true for the first row, and for the first column, and so, this is why you're able to so immediately fill out the table as you already have.

Continue doing this for all cells until $T$ is filled.

As mentioned, multiple optimal solutions may exist. In order to obtain an optimal solution, you must trace $T$, using the arrows you've been drawing (or the adjacency matrix), as a guide.

To obtain the path for best alignment, simply begin with the bottom-right most cell of $T$, i.e. the most recent/last computed cell, and trace your arrows to create a path back to the first cell (the top-left most).

To then construct the alignment, you will traverse this alignment path, beginning with the top-left most cell, and going to the bottom-right most cell, and, when considering the orientation of each arrow when going from cell to cell (diagonal, horizontal, vertical), you will do one of the following:

For the first alignment sequence (top), simply add the character that's in the column of the cell you just moved to; for the second alignment sequence (bottom), use the character that's in that row. So then, when considering your example, and for both sequences, the first characters of an optimal solution when going from cell (0, 0) = 0 to cell (1, 1) would be:

When this happens, it means that there is a gap in the [initial] sequence that runs along the columns, since there are two rows for one column. Because of this, for the first alignment sequence, you will use a - to denote a gap. For alignment sequence two, use the character that's in the row.

Within the context of your sequences, for the optimal solution, a gap isn't encountered until the 7th character, at which point, the partial optimal solution will look like:

This is the same concept as the vertical arrow rule, except it implies there is a gap in the row-oriented sequence, and so, a - will be placed in the second alignment sequence; the first alignment sequence will use the character in that column.

After all is said and done, your optimal solution is: 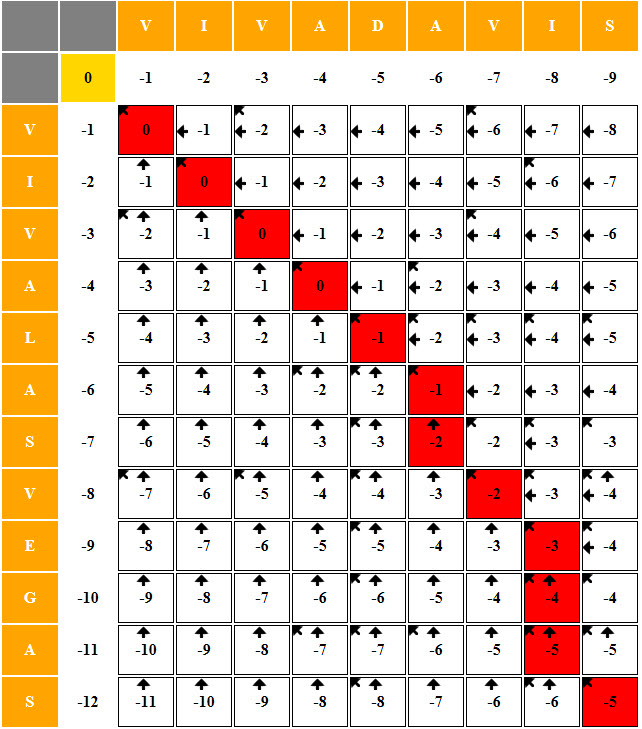 An interactive version of this algorithm can be found here.

Not the answer you're looking for? Browse other questions tagged sequence-alignment or ask your own question.

5
What is the state-of-the-art algorithm for multiple sequence alignment?
1
How to compare Smith–Waterman algorithm implementations?