What really causes the toxicity of wrongly-thawed meat?

(Note: I've seen multiple related questions over at Cooking.SE, but I'm looking for a scientific explanation, not cooking advice!)

I've been researching this for a couple of hours but the more I read, the less I seem to understand the situation. Many sources claim that thawing meat in warm water is wrong and that I should instead opt for cold water to prevent bacteria from growing and producing toxins. I found a wide variety of toxin-producing bacteria that can live and reproduce in meat, such as Escherichia coli, Salmonella, Corynebacterium diphtheriae, Listeria monocytogenes and Clostridium botulinum.

There are two things I don't understand:

Or is it possible that I've been overanalyzing the situation and the exponential relationship between bacterial growth and temperature is the main reason?

This is a really fascinating question and got me reading stuff all through the night. If my response seems tl;dr, then please skip to the fourth paragraph.

From what I've found in literature, it may be the case that prolonged exposition to certain temperature ranges may prove lethal to some pathogens. Shortening this time or shifting the temperature may cause suboptimal death rate of microbes. El-Kest et al. have found that Listeria monocytogenes would be most effectively killed by 5 to 6 freeze-thaw cycles with 35 degrees C as the thawing temperature and -18 degrees as the freezing temperature. Freezing at -198 degrees proved way less successful in killing the bacteria. This suggests that not only the thawing temperature and rate have the influence on microbial diversity in meat but also the actual temperature of storage! Here is the link to the publication by El-Kest et al.: http://jfoodprotection.org/doi/pdf/10.4315/0362-028X-55.8.639?code=fopr-site

Freezing rate also has a significant influence. If freezing occurs slowly, ice crystals will mostly appear mainly outside cells with rapid freezing having the exact opposite effect. It is quite logical why it happens: spots within the food that are freezing will slowly make the unfrozen surroundings rich in ions and osmotically active substances, the water will gradually seep out from bacterial cells to the surroundings and subsequently freeze up. (https://books.google.pl/books?id=o6kJCAAAQBAJ&pg=PA25&lpg=PA25&dq=Inactivation+by+cold.+In+Inhibition+and+Inactivation+o+f+Vegetative+Microbes.&source=bl&ots=zlH-dMFiqo&sig=AfglM7piuvMnjI3q3JV0ovHy-FE&hl=pl&sa=X&ved=0ahUKEwjS-6fAypTYAhWiJJoKHe-gDJAQ6AEIQTAE#v=onepage&q=Inactivation%20by%20cold.%20In%20Inhibition%20and%20Inactivation%20o%20f%20Vegetative%20Microbes.&f=false) From that perspective slow freezing is more likely to get microorganisms killed, as there is no cold-shock response and the cells do not become desiccated prior to freezing.

Now, let's look at the big question: why can't we use warm water to thaw meat. As one of the commenters pointed out, there is something called "danger zone" in frozen food safety, in fact USDA keeps talking about it all the time. This might be counterintuitive but by rapidly increasing the temperature in outer layers of meat, you will quickly provide microbes with ideal conditions for cellular division. As time progresses each next layer will be infested by bacteria from the outer layer as well as those that will just start undergoing cellular division, and so on, and so on, until you reach the very center. You end up with a pretty nice bunch of bacteria throughout your meal, though you shouldn't probably worry to much about it, unless you like your meat half-raw. 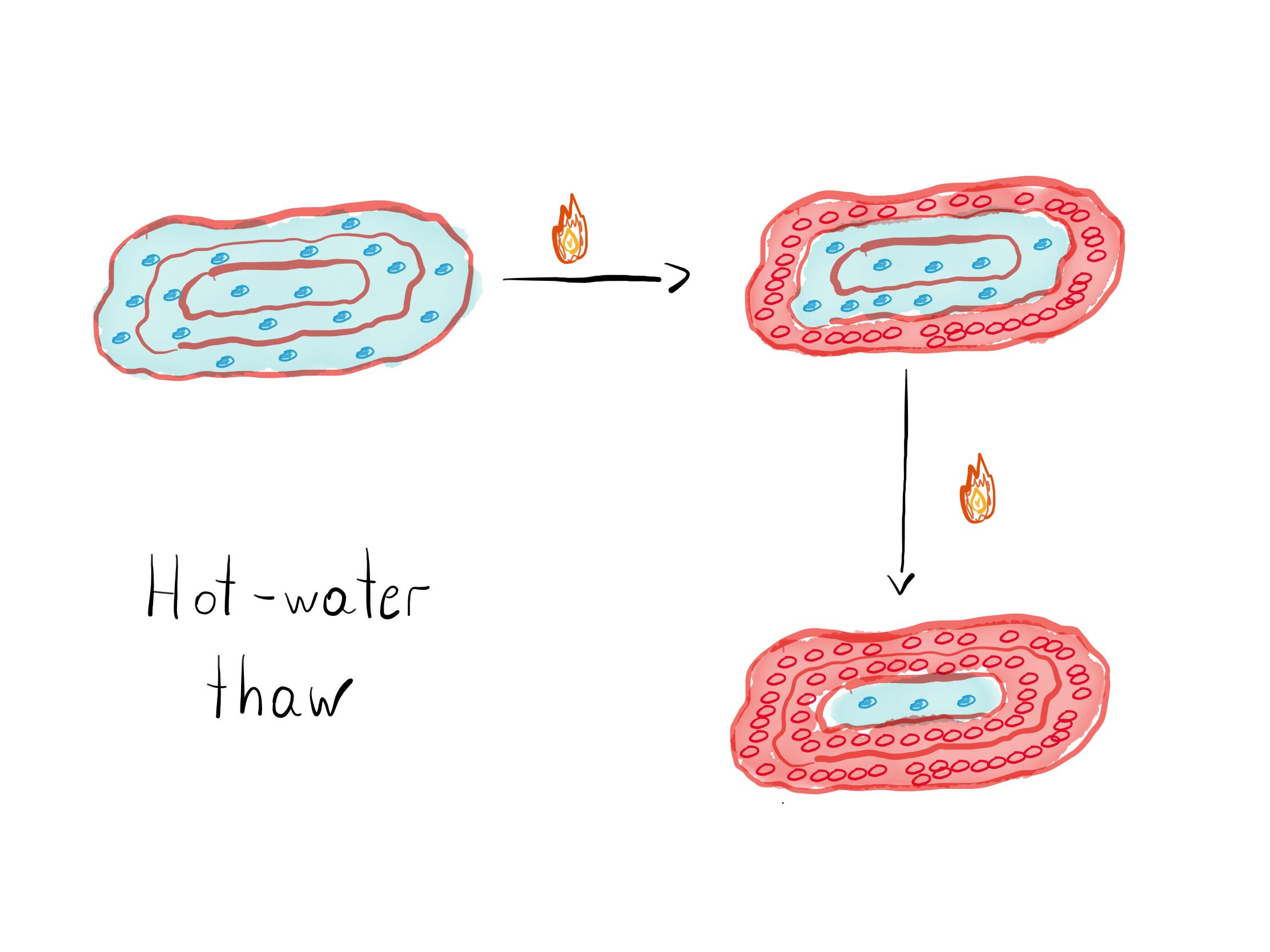 What happens during cold-water thaw or refrigerator thaw is different because you essentially increase the temperature of each consecutive layer but without providing enough thermal energy to give microbes a near-optimal temperature for intensive cellular division. Sure, they will start dividing anyway but to a much lesser degree. The temperature increase is not rapid therefore there is no abrupt resumption of life-cycles of microbes. Think of it as waking up on a cold winter day vs. warm, pleasant summer morning. 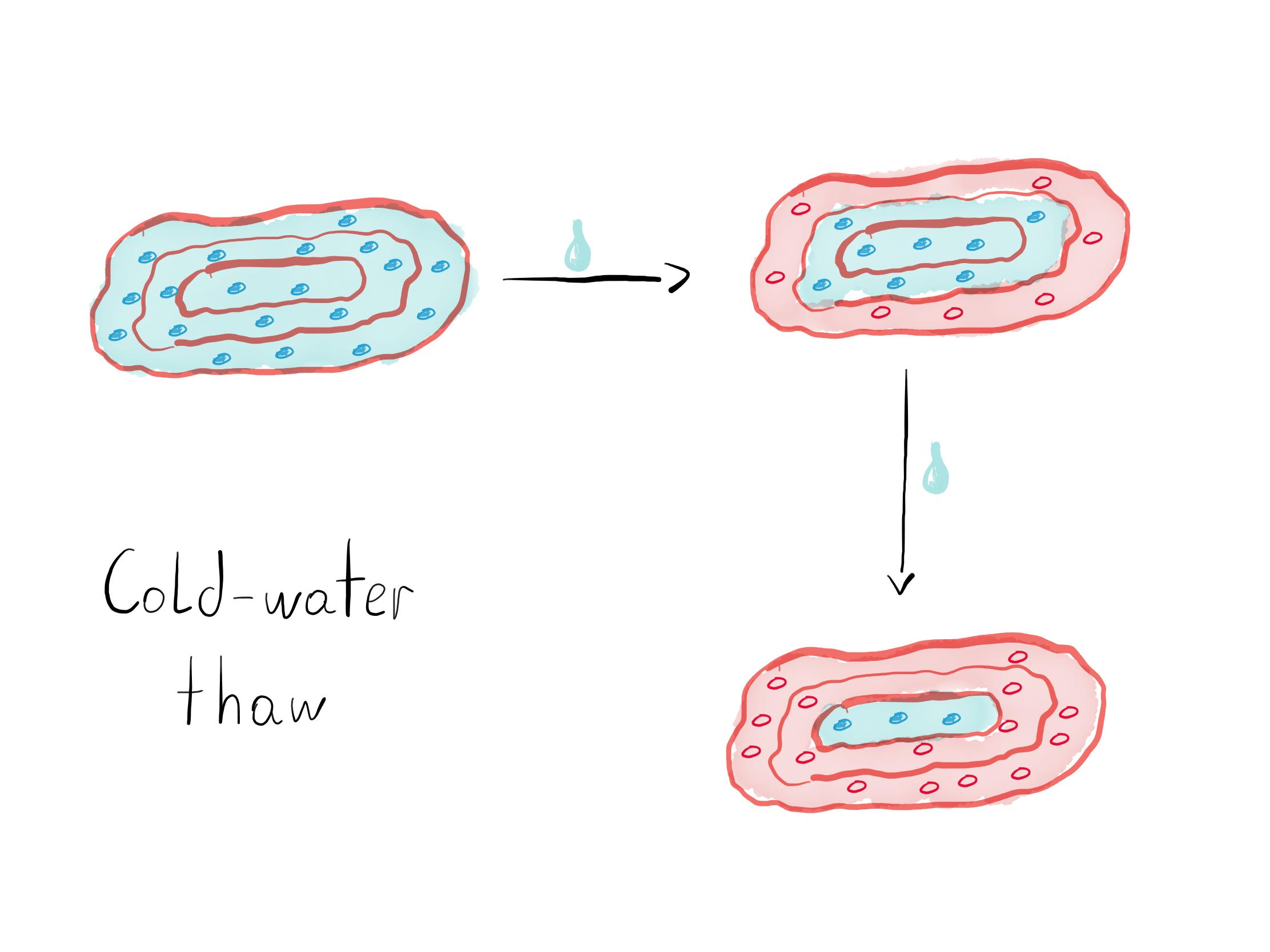 Now, regarding your second question, I'll mostly answer from my own experience. We used to test meat in our microbiology lab during studies and we tested different kinds of meat. Teachers who teach the subject for 10+ years, when asked, admitted that there is generally a pattern of how many bacteria and what types of bacteria populate different kinds of meat, so there is no safe way to say that there is a single major pathogen that is responsible for food poisoning from meat in general. I'd say what's most dangerous are exotoxins produced by those bacteria, e.g. botulinum toxin is the most potent toxin known to mankind and Clostridium botulinum loves to populate meat stored at room temperature. Listeria is a popular example because of its great survivability in cold temperatures. But it really depends on the kind of meat and even on the specific batch of meat. You simply never know what you'll get with it.

Either way, you were not just overanalyzing the topic. There are really many factors to the quality of food preparation safety, especially when it comes to meat. To summarize:

[EDIT] There was a request in the comments to include some more info about the toxins produced by food-borne pathogens. There's a good review here: https://www.ncbi.nlm.nih.gov/pubmed/8750662 (not sure if paywalled though, I'm using library internet right now). You could group those toxins into 4 arbitrarily defined groups:

Generally E. coli strains have many subtypes of heat-stable as well as heat-liable enterotoxins and some strains have other types of toxins like the O157:H7. The name "enterotoxins" refers to toxins that are secreted by microorganisms targeting intestines and generally they are cytotoxic, which essentially means they cause cell lysis of the host. Mechanisms of action are varying, e.g. cholera toxin triggers a cascade of reactions that overdrive CFTR channels (chloride ion transporters) and alters osmotic balance, which macroscopically manifests itself by a production of characteristic watery stool.

Worth noticing: some of those pathogens require other factors to cause disease, e.g. Vibrio cholerae requires a toxin-coregulated pilus to be pathogenic and some even do not produce any toxins directly (for instance Listeria monocytogenes overdrives lysosomes and doesn't let them take the bacterium apart, then it spreads from cell to cell by the means of actin filaments).

In the context of detox diets, there is a large dispute going on about their effectiveness whatsoever. I'd recommend confronting these two articles, which, to me are well written: https://link.springer.com/chapter/10.1007/978-3-319-49929-1_33 http://onlinelibrary.wiley.com/doi/10.1111/jhn.12286/full Some animal models have indeed shown some anti-toxic effects of certain foods, other researchers argue that most of the toxins eventually get to the liver and get broken down. The liver does its job pretty well, so running for two weeks on a "kale juice" would be a bad idea. People seem to forget that usually the dose is the poison: if you ingest highly diluted cyanide, it won't harm you, while drinking 7-8 liters of water at once could kill. Switching to an unbalanced, monotonous diet could be actually detrimental to health a lot more than those minuscule amounts of food-borne toxins ingested. The best way to live a healthy life is still: move, eat well and diverse, follow food safety guidelines, take care of your physical and mental health.

5
What is the length of anaerobic biodigestion stages?
25
Hot water and bacteria
1
What concentration of table salt is needed to kill bacteria in sweaty gym clothes?
5
What are the most important factors influencing a person’s gut microbes?
4
Are aquatic filter feeders effective at cleaning water to a safe level?
8
Pink growth (aka pink slime) in bathtub or shower
99
Do beneficial viruses exist? If so, what examples are there?
1
Why most small organisms seem not to be interested in any organic matter which has all moisture removed?