Type of plant cell that builds a secondary wall in between two primary walls?

I read that there is this type of pattern in cell wall synthesys. What is the type of cell that does that and in what kind of scenario?

Secondary cell walls are found in many plant cells especially ones used in for structural functions, such as the lignified cell walls in xylem such as in wood. This occurs in a mature plant cell, where the cell constructs a second wall between the primary cell wall and the plasma cell membrane, which is made up of strong cross-linked cellulose microfibrils, which are then lignified. 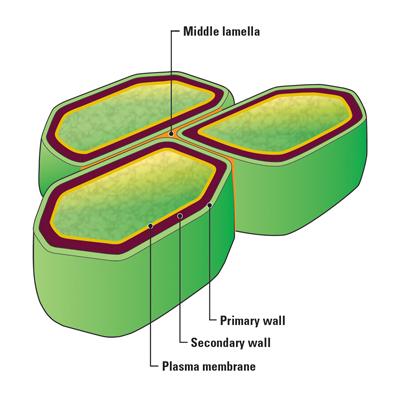 The secondary cell wall adds additional support to the cell, enabling it to carry out effective structural functions in the plant such as transportation of water and mineral ions in xylem from the roots to the leaves.

Occasionally, there is a tertiary cell wall located on the inner side of the secondary cell wall adjacent to the plasma cell membrane. This is usually very thin and is made up mainly of xylan with a small ratio of cellulose (unlike the primary and secondary cell walls which are mainly cellulose). It can be found in the xylem tracheids (usually found in the wood) of gymnosperms (e.g. conifers, ginkos). As for purpose, again, it strengthens the cell even more and sometimes contains nutrients ready to pass through the membrane into the cell.

Not the answer you're looking for? Browse other questions tagged cell-biology plant-physiology or ask your own question.

6
Primary cilia: what cell types have non-motile cilia that migrate?
4
How is the growth of benign tumors suppressed?
3
What does "cell type composition" mean?
1
Does plasmolysis kill plant cells?
1
Why does spiral or annular thickening occur in water conducting plant vessels?
1
What organelles are in an onion cell?
1
Distinction between primary and secondary tumor
2
Are all dead plant cells (that die to do a job), have secondary wall?