How do firing patterns arise from the activity of many ion channels?

In his answer to another question, Bryan Krause says:

I understand it this way: The observable and measureable firing pattern1 of the neuron (created at the trigger zone) is the linear superposition of tiny "firing patterns2" of all the (voltage-gated) ion channels at the trigger zone, which in turn depend on the probabilities of opening and closing which are the same for all ion channels of the same type and obey some Hodgkin–Huxley-like law. These probabilities correspond directly to the shape of firing pattern1.

The rhythm with which each single sodium channel opens and closes ("firing pattern2") doesn't have to mimick firing pattern1 exactly, only roughly and probabilistically: the open-close-ticks must occur near to the spikes of firing pattern1, but not exactly and not at every spike. And some complete outliers are allowed. The rest is superposition.

Seeing things this way, indiviudual ion channels do exhibit "firing patterns2", but these may look quite different than firing pattern1 (although not completely).

Is this kind of reasoning correct?

If so: Can the following conclusion be drawn: The time scale of a firing pattern1 depends on the number of ion channels at the trigger zone? This might be seen when looking at the rise time of a single action potential: If there is only one sodium channel, rise time will be larger, if there are many, it will be smaller. Is this correlation strictly linear?

Typically the activities of the ion channels are not called firing patterns as in neuroscience we refer to "firing" when we mean the elicitation of action potentials (spikes) but yes: Whenever an AP was fired a sufficient amount of sodium channels had to be open and therefore I thing your reasoning is correct. In other terms what you are saying is that the effective channel conductances change during an action potential.

On your conclusion: In the regime of natural parameters the time scale of firing pattern 1 mostly depends on the time constants of the voltage gated ion channels and not so much on the absolute number of channels (especially if all the conductances would scale equally). In the world of Hodgin-Huxley like coupled- and nonlinear-dynamical systems the voltage does not scale strictly linear with increasing the participating max. conductances. The interplay of max. conductance and temporal gating dynamics resulting in the effective conductance itself depends on the voltage and there are nonlinearities. So the correlation between the number of channels and the AP rise time is not expected to be strictly linear.

See the figure for a little example: I tested my reasoning by increasing the max. conductance for the sodium channel of a simple HH model and checked the max. steepness of the voltage (normalized by peak voltage).

Hope that answers your question(s).

Let me summarize what I believe to have learned from Jojo's and Bryan's comments in form of a visualization: The red curve is the probability governing the open and closed state of an ion channel (as a function of time - we see two spikes) The dotted patterns below show 50 ion channels fluttering between open (black) and closed (white) states, according to the probability of being open. The thin black curve is a smeared out average of the first ion channel being open (showing two slight elevations, i.e. on a coarser time scale some kind of "firing pattern" – please forgive me, Bryan). The fat black curve is the smeared out average of all ion channels. The blue curve is the number of channels being open at a given point in time which is somehow proportional to the conductance, current, and/or voltage being measured. Noise is large due to the small number (25) of ion channels. 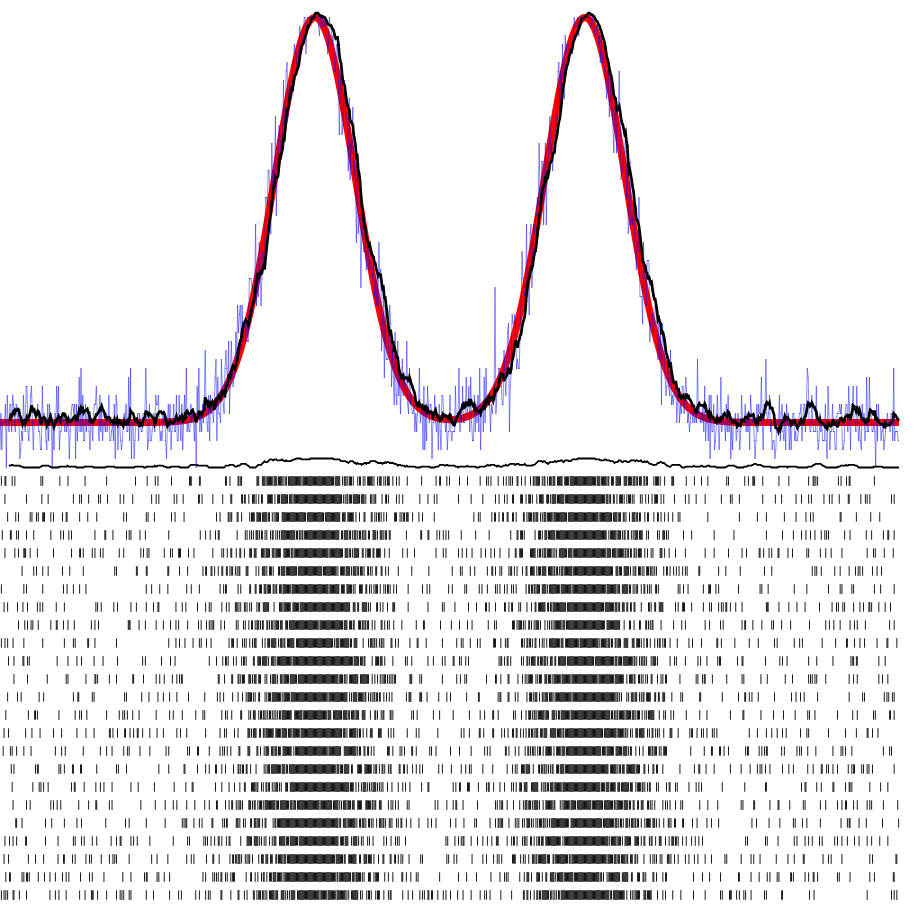 For 200 ion channels and overlaying the 200 patterns, it would look like this: 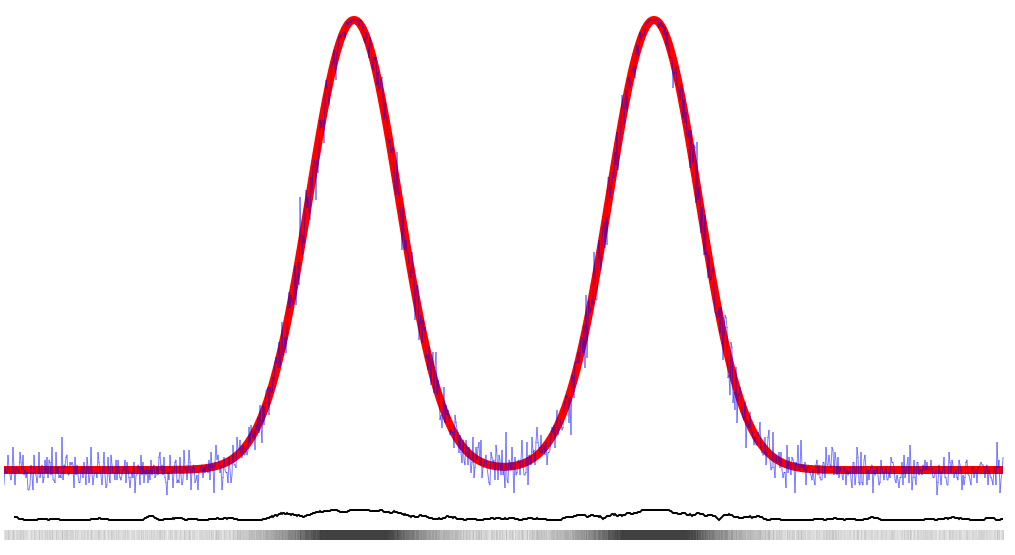 2
Are trees still carrying their leaves more likely to be felled by an autumn storm?
1
Can action potential generating ion channels only be understood as assemblies of membrane proteins (and not as single proteins)?
0
Understanding Hodgkin-Huxley's model and activation variables

1
Can action potential generating ion channels only be understood as assemblies of membrane proteins (and not as single proteins)?
0
Understanding Hodgkin-Huxley's model and activation variables
2
Causes of the stochastic behaviour of voltage-gated ion channels
2
How do scientists transfer the specific DNA in Optogenetics?
6
Where does this equation in the electrophysiology literature form come from?