Has any flying creature evolved into a sea creature?

I am talking about a creature that has evolved true flight. Has any such creature evolved into a sea creature, that permanently dwells on water (like fully aquatic fish) and doesn't come out? According to the theory of evolution, many sea creatures of the deep past evolved into land animals and some of them went a step further, evolving flight. I am talking about the reverse process, excluding semi-aquatic or semi-terrestrial animals.

Clarification of the question

The following feedbacks from the OP are his comments below

By creature of course I denote animals

By sea creature I mean those animals that either breathe in water with gills (e.g. fish) or the ones that have to surface to breathe (e.g. whales).

Water beetles are the perfect example. 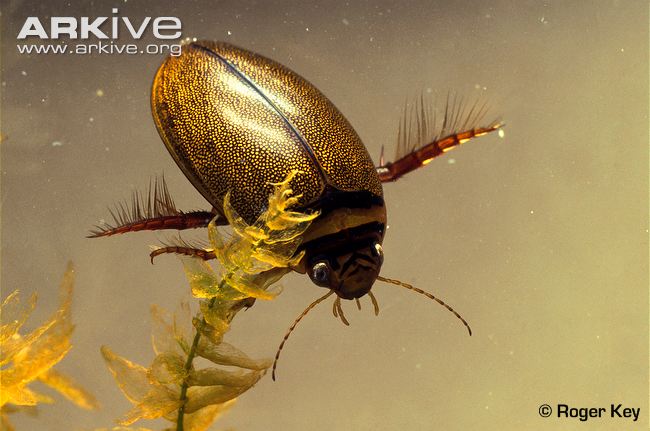 They live underwater, some of them very rarely (if ever) surface as they capture air under their abdomen and can breathe it for a long time while underwater. Just like dragonflies, butterflies, flies, bees, ants, bugs and many others, beetles are Pterygota and therefore have flying ancestors.

Here are examples of eventual interest to you.

None of these examples are as pleasant for you as an example of a big flying bird evolving gills that now live in deep sea though but unfortunately, I can't think of such case.

For fun, you might want to have a look at the post How many times did terrestrial life emerge from the ocean?

Your usage of the term "creatures" as well as the phrase "according to evolution theory" and also the phrase "many sea creatures of the deep past" make it feel like you don't have much knowledge in biodiversity, evolution and evolutionary time scale. You might want to get some intro knowledge on the subject. Understanding Evolution by UC Berkeley is a very introductory and pretty short free online course on evolutionary biology if you are interested in.

152
How many times did terrestrial life emerge from the ocean?
2
Any species returning to the land twice throughout their evolution?

31
Were there any flying dinosaurs?
4
If life began at sea, why organisms are less salty than the sea?
6
How valid are Koestler’s criticism of evolutionary theory?
3
What is the name of this sea creature?
29
What is this strange sea creature we found on the beach?