When ions diffuse out passively or are actively transported out of the ascending loop of Henle, do those ions just hang around or do they go into the circulatory system and leave the kidney.

I ask because I know the medulla must stay salty but I always assumed that those ions were then entering blood vessels for another purpose.

Do ions in the medullary interstitium just hang out, or go into the circulatory system and leave the kidney?

You've grasped one of the fundamental principles of the renal physiology -- the medulla must stay salty. Lets start there and see if we can't work out what happens.

As the filtrate flows through the tubule, solutes are removed from the lumen at the thick ascending limb and added to the medullary ECF. This concentrates solutes in the medulla, producing the corticomedullary gradient (the medulla must stay salty). This is called countercurrent multiplication, and explains how such a large osmolar gradient occurs between the cortex and the medulla.

At steady state, with an established corticomedullary gradient, what happens? Solutes continue to be reabsorbed by the tubular cells in the thick ascending limb. In order for it to be steady state, each ion reabsorbed into the ECF needs to go somewhere. One of three things could happen to these ions:

In fact, all of these things happen to a certain extent.

I always assumed that those ions were then entering blood vessels for another purpose.

So this does happen, but remember, the main reason for concentrating solutes in the medulla is so that the kidney can, if it needs to, excrete a very concentrated urine. Ions enter the blood vessels for the same purpose, in order to prevent them from diffusing back to the cortex, dissipating the corticomedullary gradient.

The concepts of countercurrent multiplication and countercurrent exchange were proposed in the 1940s and supported by a series of experiments in the 1950s. The landmark 1959 paper by Gottschalk and Mylle in The American Journal of Physiology was reprinted in 1997 by JASN and available for download without a paywall. It's an excellent read! As they predicted, we've learned a lot more, but this model still holds up, and is what we teach in renal physiology to this day.

This is their figure: 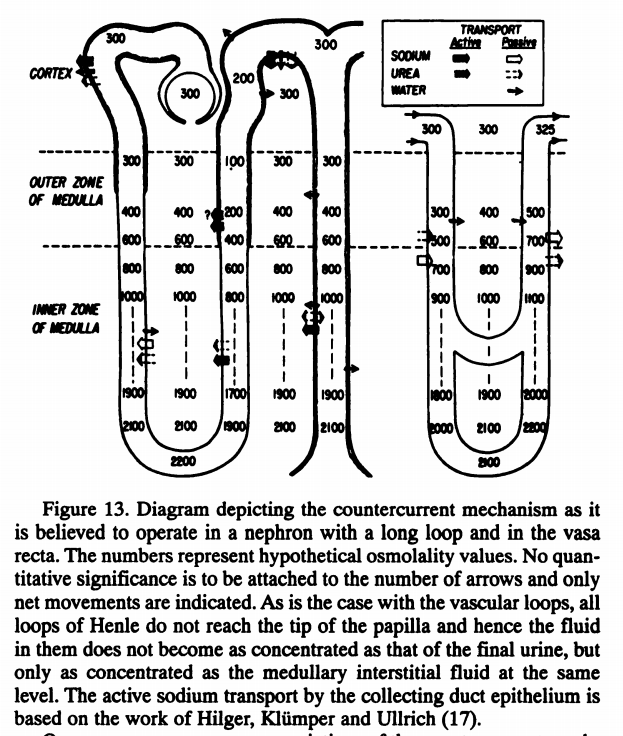 Not the answer you're looking for? Browse other questions tagged human-biology physiology renal-physiology or ask your own question.

2
Why are ammonium ions reabsorbed in the thick ascending limb during acid secretion?