I have a problem in understanding the introduction of this paper entitled "Stability and bifurcation in a model for the dynamics of stem-like cells in leukemia under treatment". As I have no background in biology, it's difficult for me to get the meaning of some terms like:

On the other hand, the second paragraph is completely confusing to me:

Let $Q$ denote the density of stem-cells population. A percentage $\eta_1$ of these ones are supposed to undergo asymmetric division with one daughter cell identical to the mother cell and the other one committed to differentiation. A percentage $\eta_2$ of the stem-like population differentiate symmetrically and go to the line of mature cells. The rest of them, a percentage $(1- \eta_1 - \eta_2)$ is supposed to self-renew: both cells that result from mitosis are identical to the cell that entred to the cell cycle. The same duration $\tau$ of the cell cycle is supposed for all types of division. 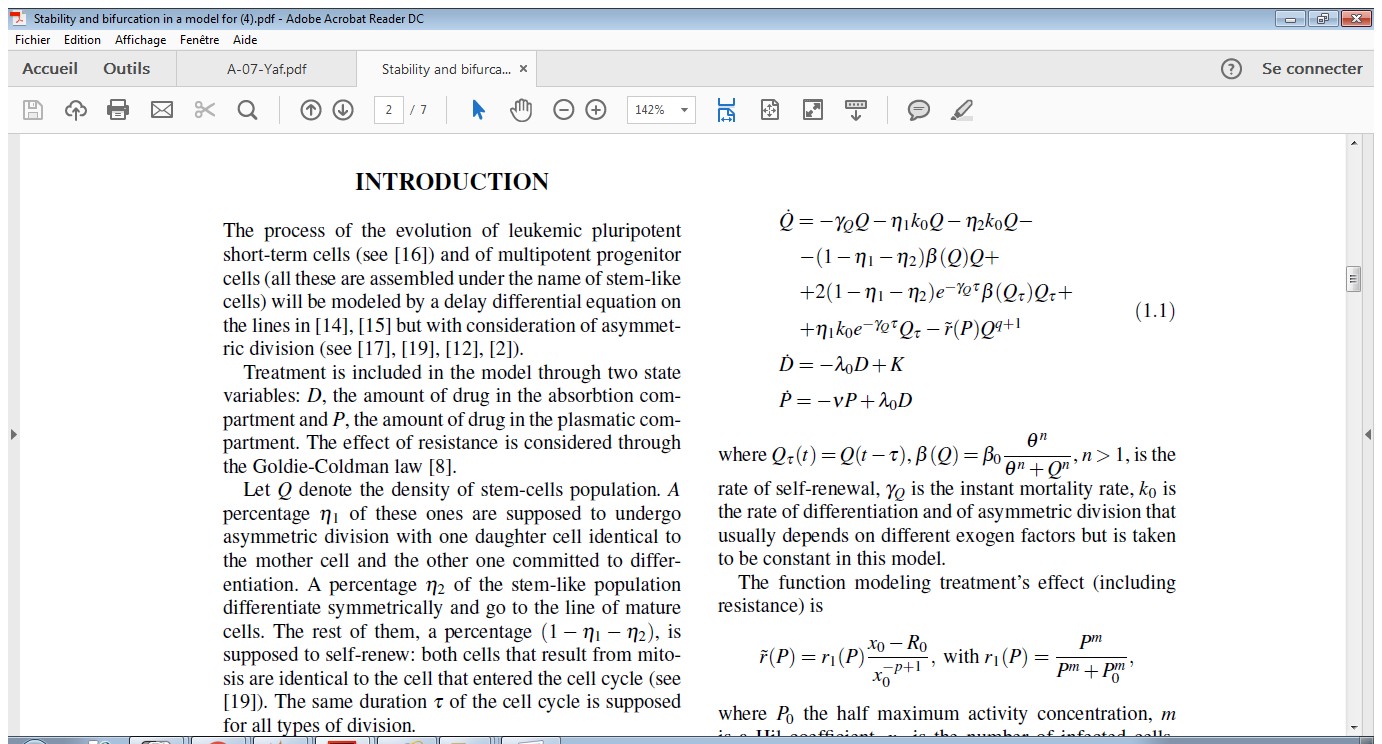 Is there a charitable soul to indicate some web page or youtube video on the subject?

Some background: leukemia is an immune cancer so it comes from the hematopoietic system. Thus, it would be useful to look into Hematopoietic stem cells (HSCs). Note that, in general, the (semantic) hierarchy of stem cells goes: totipotent, pluripotent, and multipotent, in order of less generality (i.e. more differentiated, or more mature as a cell in other words). Maybe reading about stem cells in general would be useful too.

This hypothesis predicts that the tumor cells develop resistant phenotypic variations towards chemotherapeutic agents. This resistance is independent of the chemotherapeutic agent and dependent on the number of cell divisions that occur after treatment begins. The larger the tumor size or the longer delay in initiating chemotherapy, the more resistant cells. The implication is that a regimen of alternating cycles of two different non–cross-resistant chemotherapy medicines yields a better chance of tumor eradication. (From here).

In other words, it is a model for how cancers become resistant to drugs. See also Improving       Cancer Treatment via Mathematical Modeling: Surmounting the Challenges is Worth the Effort.

Ok, onto the second paragraph. I will be very informal here :)

Within a cell population (cancer or otherwise), often there is a small subpopulation of stem cells (the rest of the cells are differentiated cells). So if there are $N$ cells in total, roughly $S=QN$ will be the number of stem cells present.

A percentage $\eta_1$ of these ones are supposed to undergo asymmetric division with one daughter cell identical to the mother cell and the other one committed to differentiation.

Within the population of stem cells (which are a subpopulation of cells), there will be further subcategories with different reproductive behaviours. Notice there are really only 3 options: a stem cell becomes (a) two stem cells, (b) two differentiated cells, and (c) one stem and one differentiated cell. This sentence means that roughly $s_1 = \eta_1 S$ cells will divide in the asymmetric pattern given above.

A percentage $\eta_2$ of the stem-like population differentiate symmetrically and go to the line of mature cells.

This means the number of symmetric divider cells is roughly $s_2 = \eta_2 S$ (both outputs will be differentiated.

The rest of them, a percentage $p = 1−\eta_1−\eta_2$ is supposed to self-renew: both cells that result from mitosis are identical to the cell that entered to the cell cycle.

The same duration $\tau$ of the cell cycle is supposed for all types of division.

In order to divide, every cell has to undergo a complex process called the cell cycle. This takes time; in other words, it upper-bounds/limits the rate at which cells can divide. Presumably, different cells take different lengths of times to divide. This assumption above ignores this issue.

From a high level perspective, we need to account for three effects of treatment: (1) the building of the cancer's resistance to that treatment, (2) the increase in drug effect as it gets absorbed and decrease as it is excreted, and (3) the effect of the drug on the target cells.

First, notice in the differential equations: \begin{align} \dot{Q} = f(Q,t) - \tilde{r}(P)Q^{q+1} \\ \dot{D} = -\lambda_0 D + K \\ \dot{P} = -vP + \lambda_0 D \end{align} that (2) is being handled in the equations for $D$ and $P$. Drugs start in some compartment (like the intestines when you swallow a pill) where they are not so useful against leukemia. Here they start with some concentration $K$, and the amount of drug decreases with first-order kinetics, i.e. the first order linear differential equation that shows $D$ decreasing. See an article on pharmacokinetics for more info on this.

Once the drug is absorbed (i.e. contributes to $P$ instead of $D$), it enters the plasma and starts to have an effect on the leukemia cells. (Notice that (2) is being handled here as well, in the $-vP$ term of the differential formula for $P$, which measures how fast your body is destroying the drug.)

Naturally, only the drug concentration $P$ in the blood plasma can affect the cancer cells; hence, the term for $\tilde{r}$ only depends on $P$!

Next, we can see how the model accounts for (3) in the differential equation for $Q$. Again, we have first-order kinetics of $Q$ (by the first-order linear differential relation), modulated by $r$ and $q$. Since $q + 1 > 0$ and $\tilde{r} \geq 0$, we know that as $\tilde{r}$ increases, we are causing $Q$ to decrease faster, i.e. we are hurting the cancer more (good!). Thus we expect that as $P$ (the drug concentration) increases, $\tilde{r}$ should also increase.

Ok, so now for (1). Notice that the equation for $\tilde{r}$ breaks into 2 terms. The second term is $R_T=(x_0- R_0)/x_0^{-p+1}$. This captures the effect of resistance, as the cancer evolves via mutation to gain resistance to the drug. Notice there is no dependence on the drug itself (just as described in the Goldie-Coldman hypothesis). (Note that this may not be realistic, since the drug will induce an (un)natural selection pressure on the cells and encourage the ones that resist the drug to proliferate more easily; however it does simplify the model). Notice that $R_T$ decreases as $R_0$ increases, meaning that as the number of resistant cells increases, the efficacy of the treatment decreases.

The first term, i.e. $r_1(P)$, describes the effectiveness of the drug as a function of its concentration via the classical Hill equation. Simplistically speaking, drugs often act via receptor molecules on the surfaces of cells; once all these receptors are saturated, the drug cannot affect the cell anymore! Hence, the effect of a drug "levels off": as its concentration increases, it will bind more and more receptors (and thus have more and more effect, albeit at a diminishing rate), until saturation occurs and adding more drug (i.e. increasing $P$ no longer does anything). You can see this in the equation for $r_1$ since $\lim_{P\rightarrow\infty} r_1(P) = 1$ (though of course $\partial_P r_1 > 0$ still). The $m$ and the $P_0$ simply control this relationship: the Hill coefficient $m$ describes the "cooperative binding" properties of the drug (see the link above for details), i.e. whether binding accelerates further binding or not, while $P_0$ (usually denoted $K_A$, or called the dissociation constant) describes the ligand concentration at which half the target sites are occupied. Higher $P_0$ means that occupying half the receptor sites requires a higher concentration, which means you need more drug for the same effect, i.e. the efficacy of the drug is poorer; this is why $P_0$ appears on the denominator: as it increases, the effect of the drug on the cells (given by $\tilde{r}$) will decrease. Essentially, $m$ controls how fast the drug reaches peak efficacy (how steep the curve is), while $P_0$ controls the physical properties of molecular binding (the translation component of the curve).

Not the answer you're looking for? Browse other questions tagged theoretical-biology stem-cells or ask your own question.

6
How do stem cells produce 200 billion new blood cells every day? Does 1 stem cell division result in production of just 1 blood cell or many?
1
What is the difference between pluripotent and totipotent cells?
2
Can I grow unlimited stem cells from limited embryonic stem cells?
1
Stem Cell Replication
2
What is the relationship between induction of cell differentiation and DNA methylation status?
1
What cells in mosses behave analogously to mammalian embryonic stem cells?
0
Difference between stem cell "expansion", "repopulation", and "self-renewal"?