This question is about the Hodgkin-Huxley model as introduced in Eugene M. Izhikevich, Dynamical Systems in Neuroscience, p.33 ff.

I'm having trouble to understand and interpret the differential equation for the activation variable $m$:

for the net current $I$ generated by a large population of identical channels where $p$ is the average proportion of channels in the open state, $\bar{g}$ is the maximal conductance of the population, and $E$ is the reverse potential of the current.

The differential equation might give us $m$ as an explicit function of time but it – explicitly – involves $V$ which is – implicitly – another function of time, which in turn depends on the number of open gates. Things are horribly complicated!

On the other hand — since it's about voltage-gated channels and there are "immediate" voltage-sensitive regions in the channel protein which presumably don't have memory ("the single channel has no memory about the duration of its own state"), but possibly a time lag — I expected the being-open-probability of an activation gate to be a "pure" (possibly time-lagged) function of $V$.

My question comes in two disguises 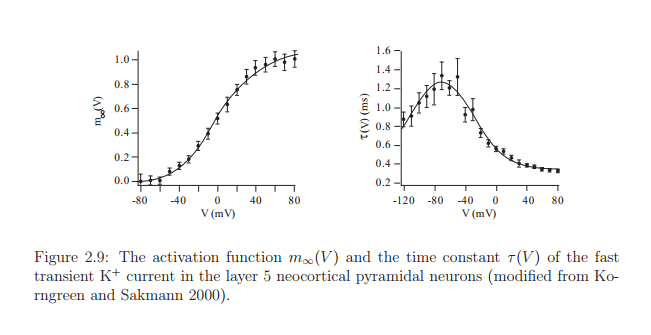 be given? What does the time constant $\tau(V)$ and its dependence on $V$ mean? In which respect and by which hypothesised mechanism is the gate "faster", when $\tau$ is smaller? How can the voltage-sensitive steady-state activation function $m_\infty(V)$ be intuitively explained other than by "giving the asymptotic value of $m$ when the potential $V$ is fixed (voltage-clamp)" or by some complicated description of experiments to determine it? What does $m_\infty(V) - m$ mean, i.e. "the deviation of the current activation from the steady-state activation"?

1) In practice, no one attempts to obtain explicit solutions for m(t), especially considering the presence of many other ion channel species, nor is there any need to. The standard of art is to use numerical simulations with a sampling interval dT that is sufficiently smaller than any relevant time constants.

2) I'm not sure what intuitive and sensible interpretation you are looking for; it may not make sense to come up with an intuitive explanation for each and every subset of terms. The use of time constants implies that the system is modeled as a linear time invariant system at a given voltage.

What does the time constant τ(V) and its dependence on V mean? In which respect and by which hypothesised mechanism is the gate "faster", when τ is smaller?

The time constant is a scalar that describes the rate at which the system approaches some equilibrium. You could think of the changes in channel state as chemical reactions of the form:

How can the voltage-sensitive steady-state activation function m∞(V) be intuitively explained other than by "giving the asymptotic value of mm when the potential V is fixed (voltage-clamp)" or by some complicated description of experiments to determine it?

That's exactly what it means, and the descriptions are not complicated: the steady state value for a reversible reaction is the point at which the number of units moving from open to closed would be the same as the number moving from closed to open, so on average you see no more change: that's what steady-state means.

What does m∞(V)−m mean, i.e. "the deviation of the current activation from the steady-state activation"?

Yes, "the deviation of the current activation from the steady-state activation" is accurate. The equation is an equation for the change of m, and the change of m is proportional to the "distance from equilibrium" - this is a characteristic of any process that follows linear time invariant dynamics. Note that there are other ways to write this equation that involve a "forward rate", a "backward rate", and the concentration of units in each state (the Wikipedia Hodgkin-Huxley page you linked has these equations), but you can simplify these to the equation you show here because some proportion of the "forward rate" process is cancelled by the "backward rate": your equation is sufficient to describe the net change.

0
How do firing patterns arise from the activity of many ion channels?

1
What exactly is the time constant of an ion channel gating?
0
How do you derive steady-state conditions from the open-state differential equation of ion channels?
0
How do firing patterns arise from the activity of many ion channels?
2
Causes of the stochastic behaviour of voltage-gated ion channels
2
Help me understand voltage patch clamping