Why is the Hydra Biologically Immortal?

I have heard that the Hydra organism is biologically immortal (later I found that there are more immortal organisms). Now I know that its immortality is related to its telomerase. The thing is that we all have telomerase, but we age and Hydra don't. What are the proteins (especially telomerase) related to aging in humans and Hydra and how do they work differently? 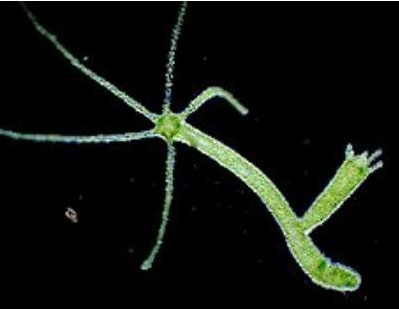 Hydra are just one of the many organisms which are immortal. That is to say all their cells divide forever - there is no senescence (planned cell death) in any of their cells. Interestingly Hydrae that reproduce sexually age and die, but asexual reproduction appear to be immortal. Animals that are immortal more often reproduce asexually... this may only be because immortality became unpopular in evolution early on and may have not developed senescence in the way other animals have, or lost it when it was not so integral to life.

Although immortal Hydra also appears to share the (TTAGGG)n telomere repeat, there is as yet no data on how or whether they avoid chromosome end depletion. These data suggest the possibility that senescence or death of asexual individuals and colonies may in part result from a failure to maintain chromosome ends that are restored by going through a sexually reproductive cycle .

So its not clear if the telomeres are protected in hydrae and other immortal animals. I would guess they probably don't have active telomerase if they are truly immortal, though its possible the telomeres are shortened and are repaired.

There are other factors which are supposed to be important for immortality. Yeast and single eukaryotes are not individually immortal; an individual mother cell can only divide a limited number of times. While hydrae are not a popular focus of research, there has been a concerted effort in trying to understand yeast mortality and there are more than one mechanism being pointed to.

Since there is no germline in single celled organisms, (they only have one copy of their genome to reproduce from) telomeric shortening would not be a useful mechanism for aging; Calorie restriction has been shown to prolong fission and budding yeast by activating pathways which slow aging by protecting against stress, and slowing down reproduction. All of these findings have strong parallels in work in aging in animals which is a hot topic now.

Finding these pathways is encouraging strong thought that aging and senescence are an evolutionary adaptation rather than a biological necessity.

Our current knowledge suggests that an apoptotic program has evolved in microorganisms as a survival strategy beneficial to the group. This program is dependent on cellular pathways like the Sch9, Tor1, and Ras/PKA pathways and its activation reduces cell protection and maintenance and raises the level of superoxide production, which in turn contributes to cell damage and death. Superoxide also elevates DNA damage and mutation frequency in the aging cultures ... Aging and apoptosis are intrinsically related in yeast and the mechanisms that cause them have just begun to be elucidated. ... will provide important information to understand the fundamental biology of aging in other species and investigate the controversial hypothesis that an “aging program” might be conserved in higher eukaryotes.

There is an open question as to whether an immortal yeast could be engineered to be immortal. A team at Max Planck Institute did a lot of foot work and found a strain which they claim does not seem to experience individual mortality either.

So this does indicates that immortality might not be a necessity for any cell or maybe even for animals. Occasionally, even animal and human cells can be coaxed to revert to an immortalized state, though usually it is the result of cancerous rearrangements of the genome.

This is a rich field and there are lots of telomerase focused ideas too. Maybe someone can post something along those lines.

Actually, most adult cells do not express telomerase or express it only at a very low levels. Telmoerase is highly expressed only in cells that need to divide (e.g. stem cells), thus "immortalizing" them. In fact, human cell lines which scientists work with can be "immortalized" by activation of telomerase (along with other things).

So you may ask yourself: why not have telomerase activated all the time in all cells? Well, allowing a cell to reproduce easily can be a pretty bad thing... that is exactly what cancer does. Indeed, one of the things a cancer has to do is to activate the telomerases in order to be able to grow. This is also why cancer cell lines are "immortal". This also suggests a potential cancer therapy - targeting telomerase - which is currently being pursued experimentally.

Telomerase activity is just one (probably minor) facet of aging. It takes a lot more than just basic end repair of DNA to keep a complex organism alive, especially mammals. Just a few issues off the top of my head:

For a solidly scientific, short, but very readable book on the subject, I personally liked "Understanding Ageing" by Robin Holliday. For being published in 1995, it's still relevant. He had a later book that wasn't quite as good (Aging: The Paradox of Life: Why We Age, published in 2010). In large part it's because it was fairly redundant to the first one; we've known about these problems for a long time and have made fairly little progress on them.

Part of how hydra can get away with apparent immortality is their constant proliferation of stem cells and their ability to regenerate entire body parts. This circumvents a lot of the issues above (theoretically, but I'm not an expert on hydras). Many copies of the DNA are separately housed, so if a copy gets damaged irreversibly, it can just get trashed. Most (if not all) human organs have similar reserves of active stem cells. There isn't a single universal source (outside of the sperm and eggs), but this is less important so long as the entire stem cell supply isn't compromised by some gross organ damage.

The second part is much, much harder for humans though. While some tissues (say muscle) can easily replace dead cells, it's much harder in others, like the brain. You don't just have to replace a dead cell, but all of its connections to every other cell. And really, the brain is what this all comes down to, and an identity crisis in humans. I don't care if you replace my liver and my left arm times, but how do you replace the brain? I would speculate that we spend a lot more time keeping individual cells alive, because we can't replace them.

If you chop a starfish in half, you get two starfish, and would have trouble saying which was the original. Is it the same starfish if you've replaced the arms 3 times and the body twice?

If you chopped a human in half down the center, and we could magically regenerate everything, you would get two very different people from each other and the original. The problem being that there's no way to reconstruct the connections; you'd just get a blank brain to fill up.

Not the answer you're looking for? Browse other questions tagged senescence telomere or ask your own question.

22
Do immortal organisms exist?
25
Do all organisms have to die?
9
Is there any kind of immortality in plants?
3
Hydra immortality
1
Aging and death of perennials
1
Can immortality of the Turritopsis dohrnii be learned or adapted by other species?

22
Why does regular exercise increase brain volume?
12
Have any mutations or genetic loci been associated with exceptional longevity in humans?
4
Telomerase in tetrahymena
3
Senescence, immortality and evolution?
1
Are nucleotides at the ends of DNA stripped on aging?
7
Isn't biological immortality strictly speaking impossible?
2
Is reverse senescence/“anti-aging” actually scientifically possible among humans yet?
8
Why might long telomeres be selected for in laboratory mice?