How does allele dominance work in polyploid organisms?

You know how there are tables to demonstrate allele dominance in diploids, such as the table found in this question?

Well, I was wondering how this works with tetraploids, hexaploids, octoploids, etc.

One might assume that if you have an octoploid with a gene that has one dominant allele and seven recessive ones that the dominant trait would be expressed.

One might conclude that recessive traits would be expressed a lot less often in octoploids than in diploids in a population that commonly has both kinds of alleles.

Are all three of these assumptions correct? If not, what is the truth?

Dominance works in the same way.

However, polyploids have complex inheritance patterns!

The table you mentioned in this case should be the Punnett square. And its two dimensions correspond to two types of gametes that fuses in sexual reproduction. So even if you want to utilize Punnett square to work with tetraploids, hexaploids, or even octoploids, you still use a two-dimensional table because there are only two types of gametes involved. The fundamental difference is that you have to assign combinations of alleles to the first row and first column of the table instead of a single allele as you would do with a monohybrid cross.

However, deciding what combinations are allowed will be really intricate in this case, depending on two different factors: pairing behavior during meiosis and the resulting chromosome segregation. Variations in those aspects make general rules for polyploid inheritance impossible. In extreme cases, we can consider the organism to be either fully autopolyploid or allopolyploid.

An autopolyploid has more than two complete copies of the genome of a single ancestral species, and in the extreme case we consider the chromosomes have multivalent formation during meiosis and undergo unbiased segregation.

An allopolyploid has more than two complete copies of the genome derived more or less complete from different species, and in the extreme case we consider the allopolyploid has strictly bivalent formation between the chromosomes of a common origin.

This is a monohybrid cross, and it seems familiar and boring, right? 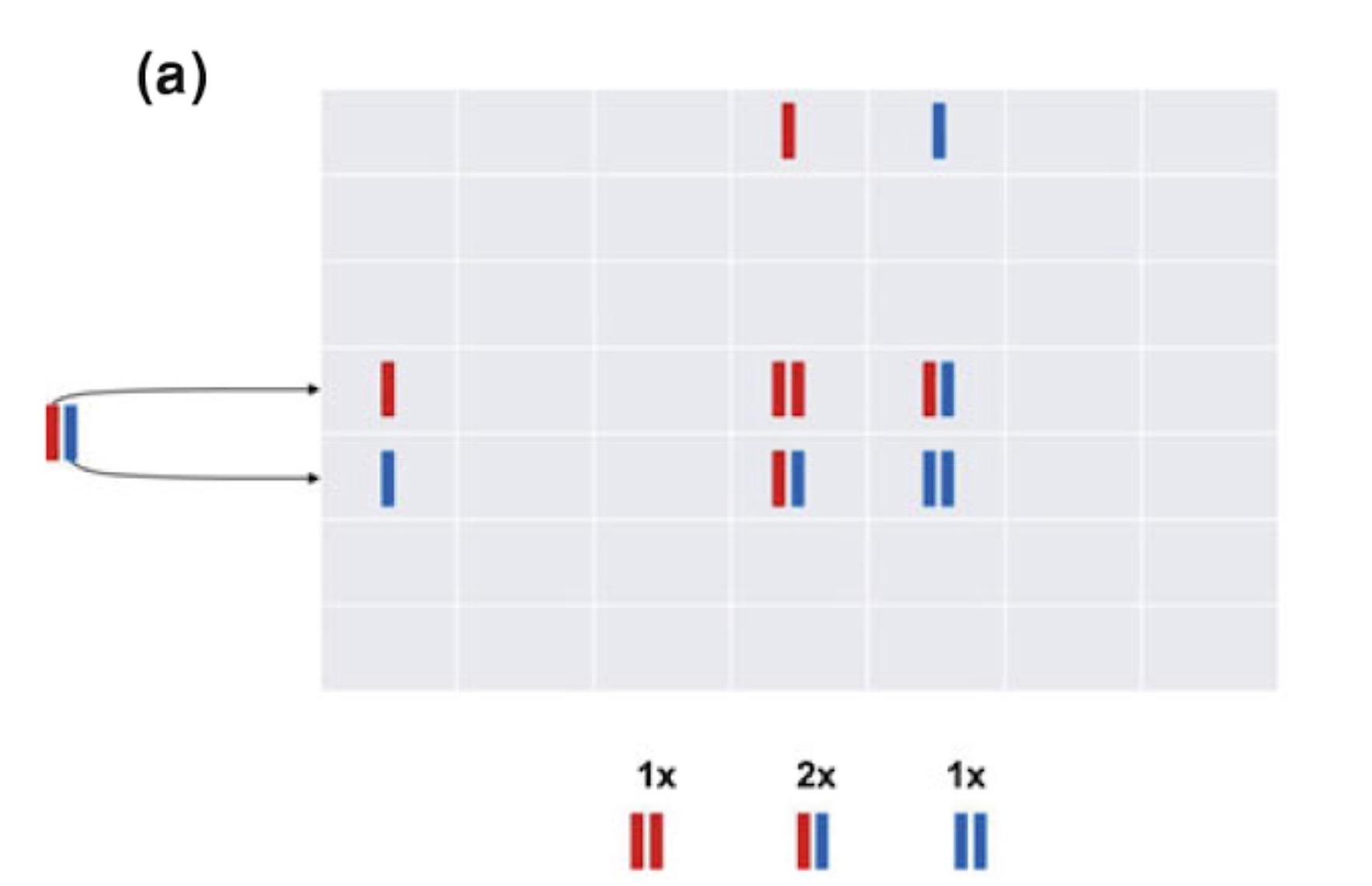 The following pictures depict how to use Punnett square with a tetraploid with two different alleles at a certain locus, and they are really captivating... 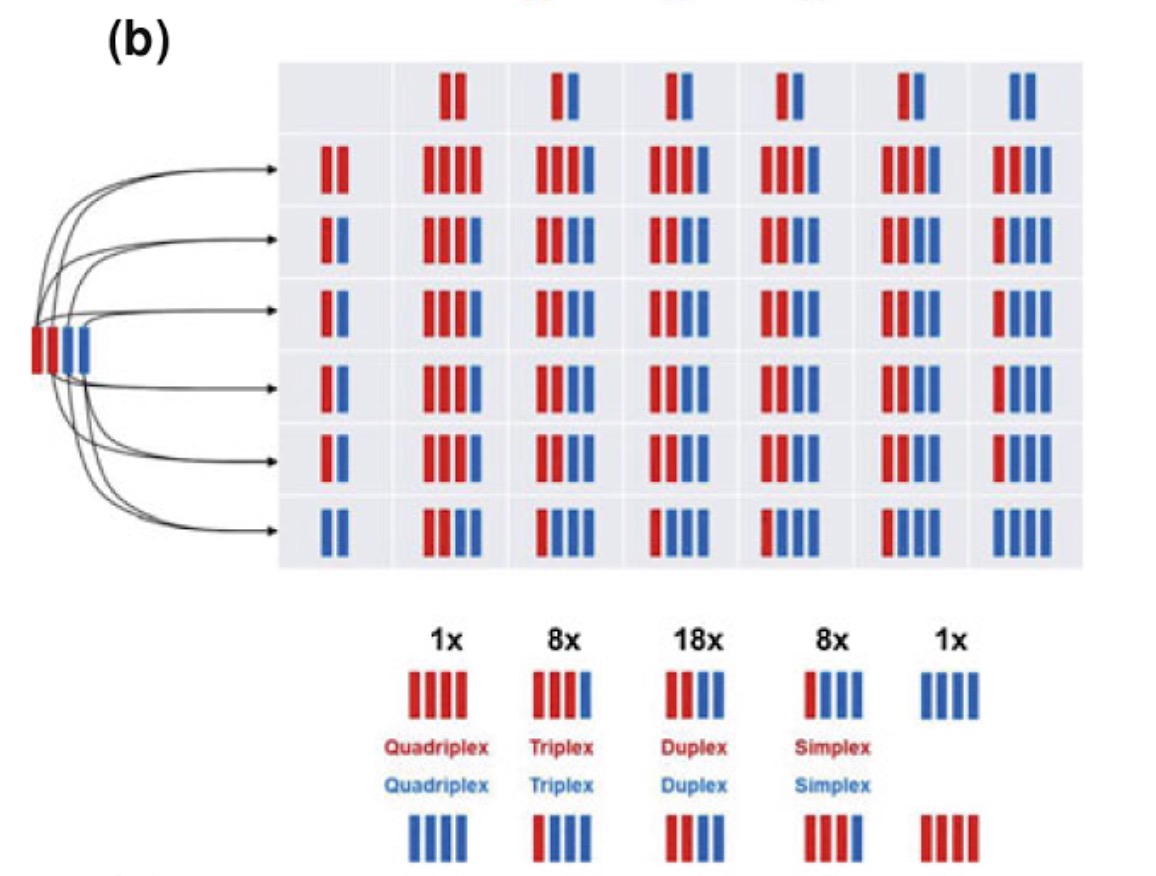 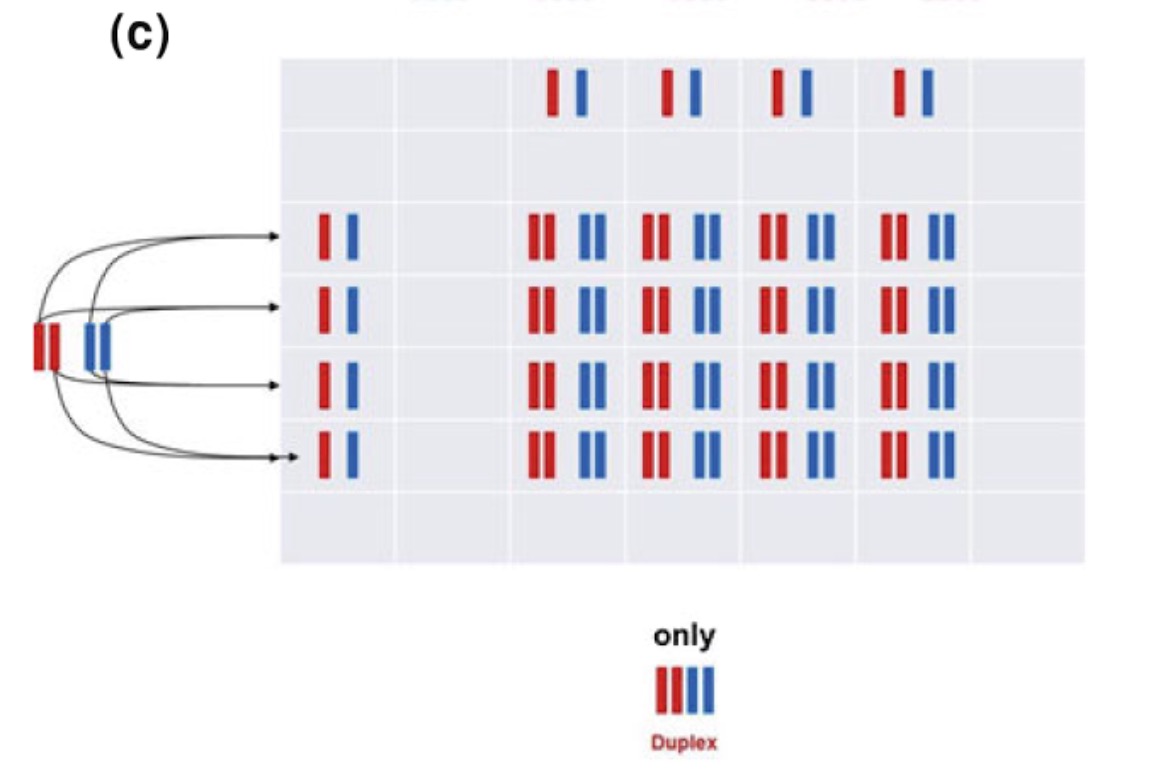 In this final picture you may find that the cross has "degenerated" into a monohybrid cross. If we try to depict something more complex, like a tetraploid with four different alleles at a single locus, we will obtain resultsvery different from normal crosses for diploids. 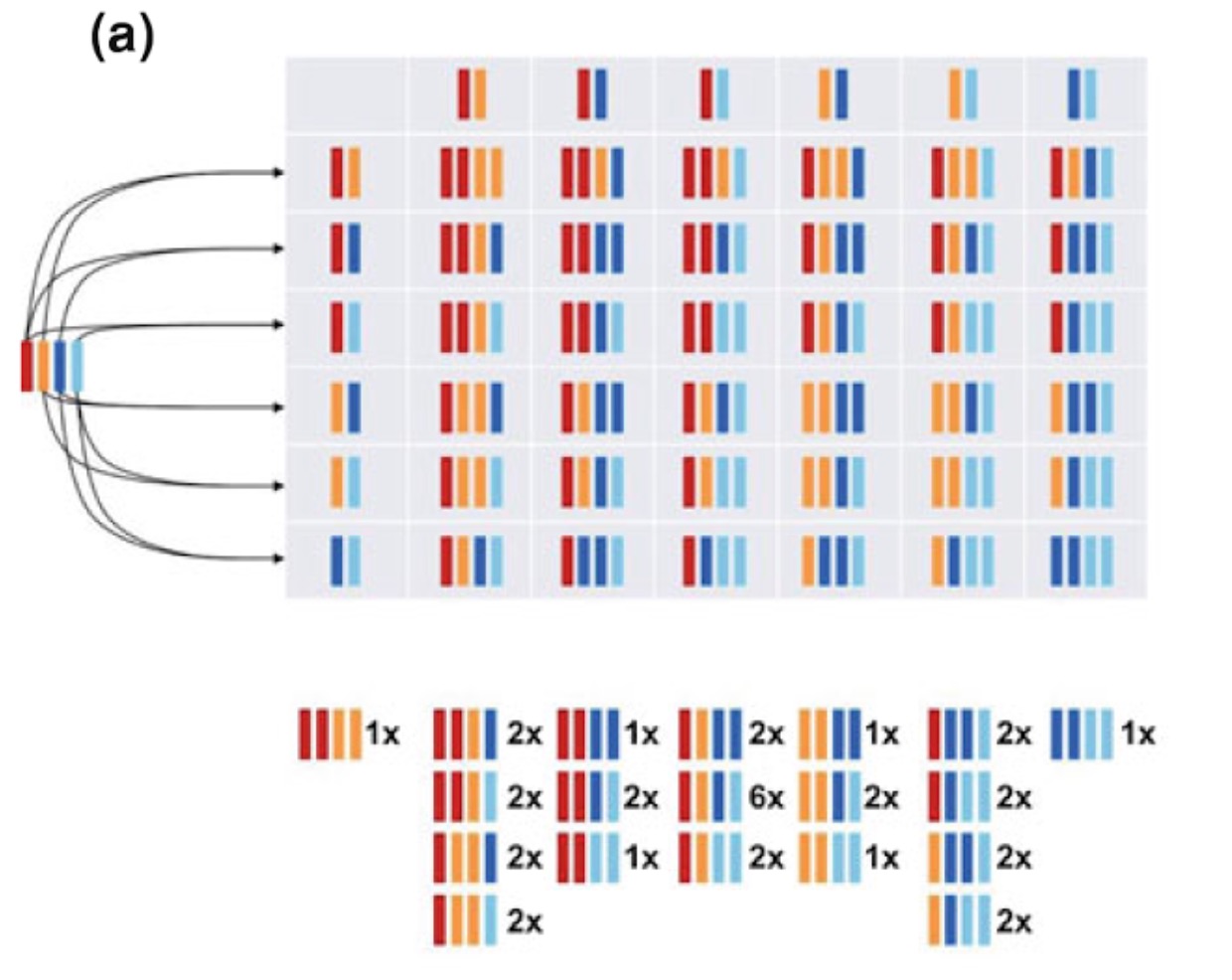 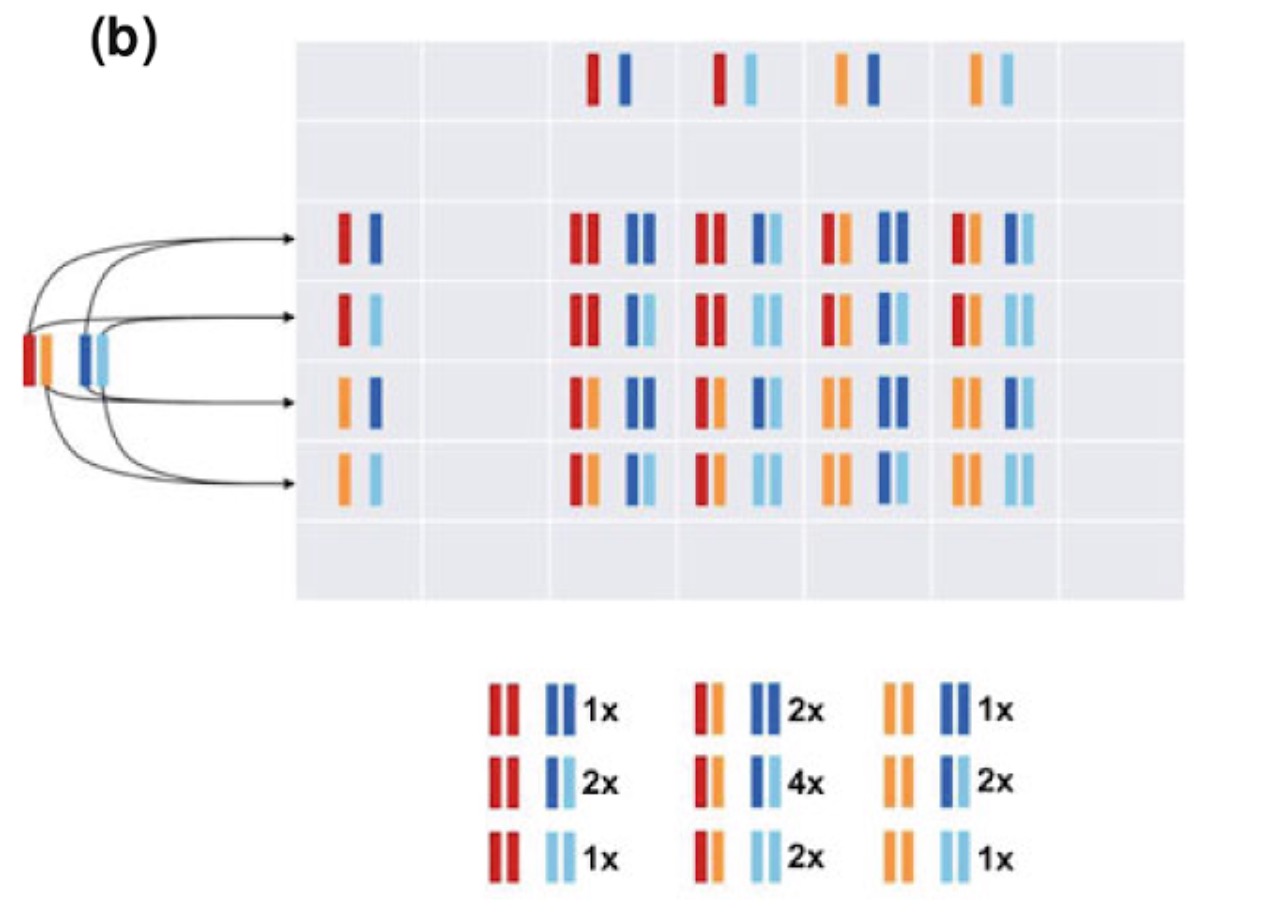 One might assume that if you have an octoploid with a gene that has one dominant allele and seven recessive ones that the dominant trait would be expressed.

This is true based on the definition of dominance:

Dominance in genetics is a relationship between alleles of one gene, in which the effect on phenotype of one allele masks the contribution of a second allele at the same locus.

One might conclude that recessive traits would be expressed a lot less often in octoploids than in diploids in a population that commonly has both kinds of alleles.

For this one, you cannot simply assume it because as I've said above, the inheritance patterns for polyploids, including octoploids, can be really complex and dependent on the particular species and the multivalent formation at the particular gene locus you wish to investigate. Thus, it's difficult to predict the the portion of individuals with a recessive phenotype in a population. There are so many intermediate patterns between two extremities of autopolyploidy and allopolyploidy that geneticists have to rely on sophisticated computational models to help them explain the data collected from experiments!

Not the answer you're looking for? Browse other questions tagged genetics allele polyploidy or ask your own question.

11
What determines if an allele is dominant or recessive?

2
Albinism inheritance problem: what are the father's alleles if he got an albino kid?
0
Passing on Alleles
3
Dominance coefficient
1
When there is incomplete dominance of one allele, is one allele still considered recessive?
0
What is the map unit between the genes?