What is the fibre axis in the Watson and Crick paper?

I was reading Watson and Crick’s original article on DNA structure in Nature 171, 737–738 (1953). The accompanying diagram (shown below) has something called the “fibre axis” going through the DNA. This axis isn’t shown in modern models of DNA, so what is it?

Short answer: The term fiber axis is not in reference to the DNA model, it comes from the experiments that Watson and Crick referenced to guess their model (performed by Rosalind Franklin). The fiber axis is the direction along the DNA strand.

Watson and Crick created their model of DNA based on the esoteric experiment called X-ray fiber diffraction. To collect fiber diffraction data ( gathered by Rosalind Franklin actually) DNA is pulled out of a cell lysate and washed with buffer. It looks like a clear, liquid, string of snot (a technical term that is). Its stringy though because the long DNA molecules pull out and create viscous fluid where the DNA is pulled along the length of the snot fiber. Because the DNA is ordered in this one dimension, if you shoot a beam of X-rays through it, it creates a pattern on film that looks like this: 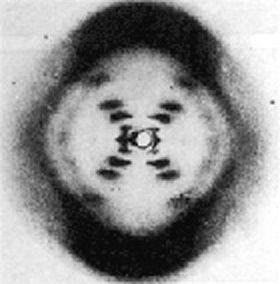 Some misc details - you have to use X-rays because their wavelength is about the size of an atomic bond and this is the scale of model Watson and Crick and Franklin and Wilkinson were trying to find.

The fiber axis is along the y axis (top to bottom) because the trail of DNA snot hangs down - it will sag if you hold it an angle.

Rosalind Franklin was a great experimentalist and she realized that the DNA snot trail dries out over time as the experiment would go on for days. She set up a moist stream of hydrogen gas blowing over the DNA strand during the X-ray experiment and so was the only experimentalist who obtained what we now know to be the true result - double helical DNA. As it dries out, DNA interconverts to the Z-DNA form I believe, which does not have the x-pattern and also confuses things because the result is a smear of the DNA helix converting from one form to another.

Francis Crick had actually predicted the X-pattern for helices. The structure actually required these two to come together to get the answer while the American genius Linus Pauling was working hard in California on the structure as well and would have won too if he understood how to keep his snot properly damp.

The reference for nearly all of this is Watson's somewhat self-centered but historically accurate book "The Double Helix".

After some surprisingly difficult Googling, I can't found a picture of DNA fiber... picture below. You can make some yourself from the protocol listed here and some saliva, soap and other common household items. 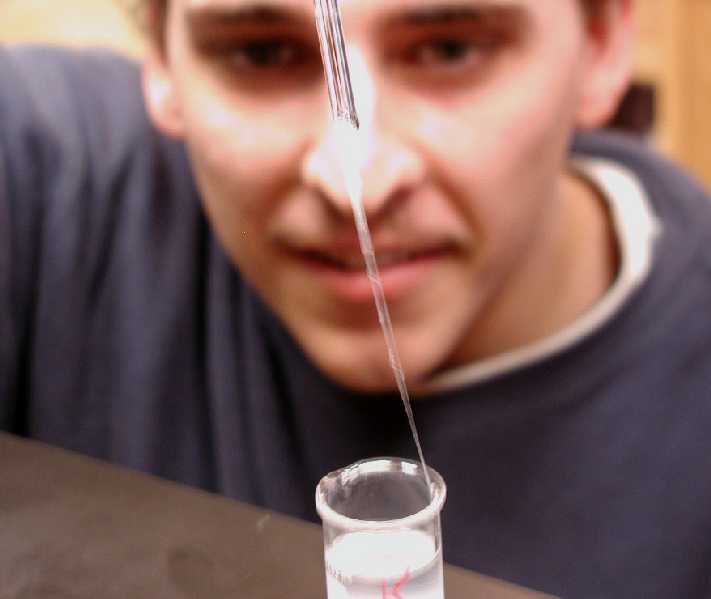 Not the answer you're looking for? Browse other questions tagged dna structural-biology 3d-structure or ask your own question.

18
What is the significance and method behind Ramachandran plots?
3
Why do the major and minor groove exist in DNA?
2
How many Watson-Crick + Hoogsteen triple base pair combinations are there?
1
What is two-start or zigzag model of 30 nm chromatin fibre?
1
What is the actual size of a nucleotide?
45
What am I looking at in Franklin's Photo 51 of DNA?
5
What did Francis Crick and James Watson discover that Rosalind Franklin didn't?