What British bat is this?

What kind of bat is this? I saw it flying quickly between trees in Buckinghamshire, UK, at about 4pm in September (so about three hours before sunset). I think it might be a common noctule but I was surprised to see that there are something like fourteen other British species to choose from. 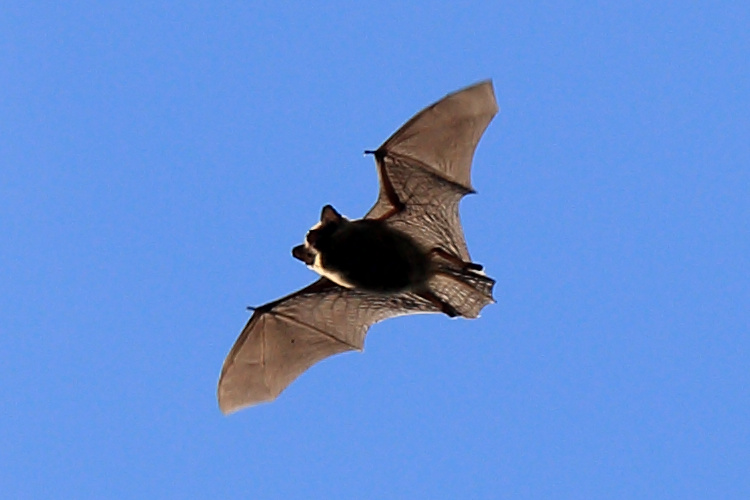 Sorry the photo quality isn't amazing but it was hard to capture anything at all!

I would guess that it's a noctule (Nyctalus noctula) also. The Bat Conservation Trust has a nice UK section with fact sheets for the 18 different species of bats found there. It seems you can rule out the long eared bats by the photo and the pipistrelle because you didn't mention it flying eratically. The fact that it was out so early seems to narrow it down to either the noctule, which is usually the first to appear, or the leislers (Nyctalus leisleri) which appears shortly after the noctule. A distinguishing feature of the noctule is a mushroom shaped tragus, and for the leislers is long fur around the shoulder and back. Although this is a great photo, it's going to be hard to make a definitive determination without knowing size and some of the other finer details. Photos of the noctule and leislers can be found on the linked data sheets and the link to the UK section can help you determine if there are any other possible candidates I missed.

It is a Big Brown Bat (Eptesicus fuscus).

One study of a population in Colorado found that their average life expectancy was a little over 6.5 years; the oldest known big brown bat was 19 years of age (!) and documented in Canada.