Are there any oxygen loving bacteria? [closed]

It seems we only found bacteria that hate oxygen. Are there any bacteria that love oxygen and would thrive in high oxygen environment?

If it slowed down or stop multiplying in low (as in normal earth atmosphere) oxygen content it would be the best.

Are there any bacteria that love oxygen and would thrive in high oxygen environment?

Regarding the influence of oxygen on growth, we classify bacteria in 5 main groups (Tortora, Funke and Case, 2015):

This image (also from ) gives us a good summary: 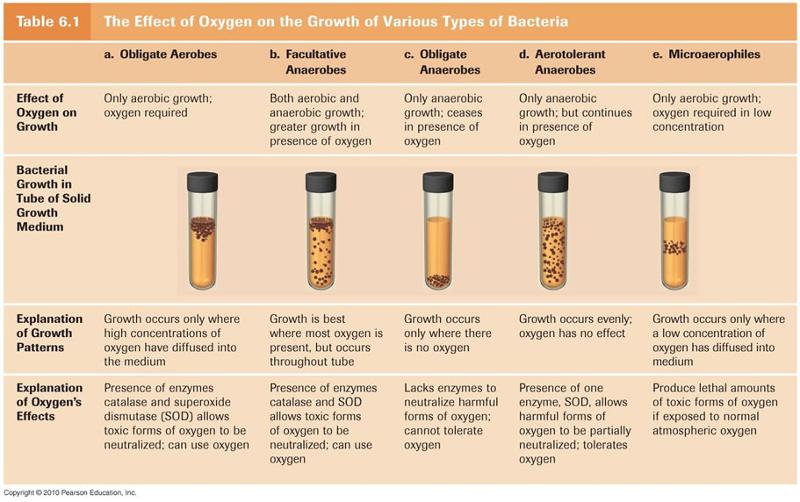 As its text says:

Obligate aerobes: Growth occurs only where high concentrations of oxygen have diffused into the medium.

Regarding your second question ("If it slowed down or stop multiplying in low - as in normal earth atmosphere - oxygen content it would be the best"), I'm afraid that there is no such organism. If I understand the question correctly, you're trying to make a comparison with hyperthermophiles, for instance: a bacterium that survives in extremely high O2 concentrations but that dies (or don't grow adequately) in normal O2 concentration. The problem is that, except for very specific and small microenvironments, like a leaf's aerenchyma, there is no place with those higher O2 concentrations in which such bacteria could evolve.

Species that require oxygen to survive can be classified into 3 groups(in bold). Their distinctions are also explained:

Microbes that use oxygen for energy-yielding purposes are called aerobes, if they require oxygen for their metabolism they are called obligate aerobes. Obligate aerobes are at a disadvantage because oxygen is poorly soluble in water and much of the environment is lacking in this necessary element. Often, aerobic bacteria have retained the ability to grow without oxygen; these are called facultative anaerobes. Those bacteria that are unable to use oxygen and in fact may be harmed by it are known as obligate anaerobes. Further groups include: the microaerophiles which are aerobic microbes that tolerate only a narrow band of oxygen concentrations usually lower than that of the atmosphere and are therefore often difficult to cultivate in the laboratory, and aerotolerant bacteria that grow in the presence of oxygen but do not require it. (Here)

Not the answer you're looking for? Browse other questions tagged bacteriology environment or ask your own question.

5
Could habitat selection pattern be deformed in environment with low variability?
5
What is the mechanism of oxygen uptake in E. coli?
15
What are the requirements for a stable carbon cycle in sealed “bottle gardens”`?
10
What bacteria shed harvestable energy from root zone organic matter?
1
Multiplication of bacillus subtilis
3
What culture medium should we use for tap/drinking water bacteria?
0
Are there any animals that maintain white fur year round?