Visual phototransduction, neurons depolarization when no light: why?

This got me thinking...

Let the collection of neurons directly getting input from the retina be referred-to as RN (retinal neurons). I'm assuming RN < IEN (subset of - correct me if I'm meaningfully-wrong).

And finally, let the collection of neurons that directly link to OENs but are part of IEN be referred-to as XN (eXporter-neurons, in the sense that they export visual information from the eye to the "listeners" outside of it).

Now, if my eyes were to be completely popped-out I'm assuming that relative to OENs that would have the same effect as XNs not passing along any excitatory/inhibitory information at all. Also, since what I'd perceive would be pure black, that seems to imply that XNs also don't get activated at all when we actually see black (e.g. close our eyes in a very dark room).

So, when we perceive black => RNs get depolarized => they release glutamate continuously => XNs don't excite/inhibit OENs at all (seems to also imply that RNs don't intersect XNs). It is this inversion that intrigues me - why is it that for XNs to transmit NO information RNs have to continuously be excited? By that sense, this makes me think of the eye as if it was a big NOT gate.

Short answer
The reason for the depolarized state of photoreceptors in the dark is unknown as far as I know. It probably has its roots deep in the evolution of the eye.

Admittedly, I do not know why phototransduction exactly is organized this way. There is a lot known about the evolutin of phototransduction (e.g., Lamb et al., 2016), but why the dark current exists is unknown as far as I know. I surmise it is probably an evolutionary relic. Evolution eventually has to work with pre-exisiting features to generate new structures, or alter them. Simple photosensitive spots evolved into the complex eyes observed in today's vertebrates. Evolution thereby used what was there and that happened to be an energetically unfavorable 'NOT' gate. 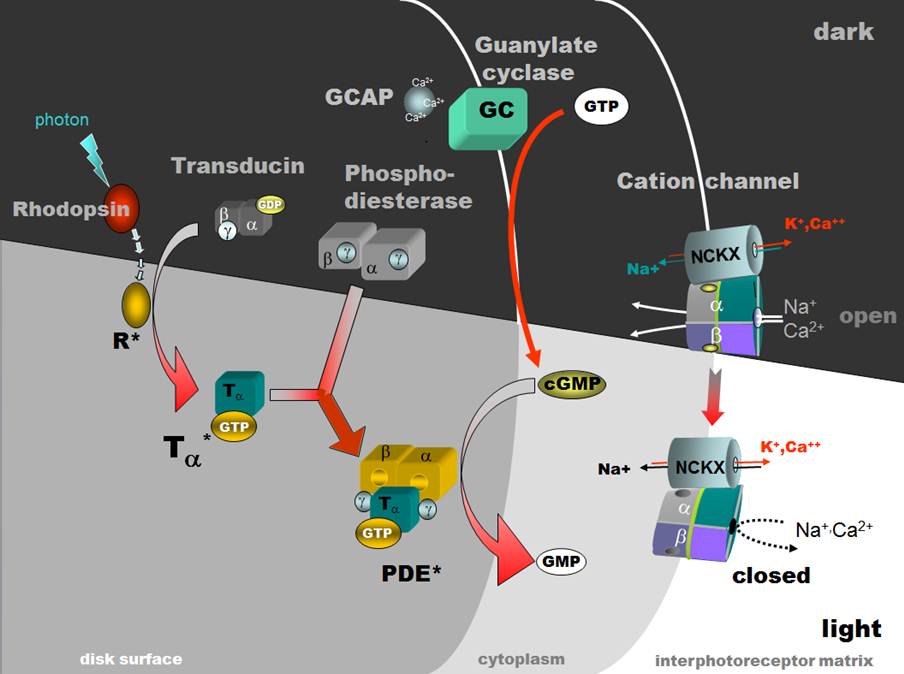 Not the answer you're looking for? Browse other questions tagged neuroscience neurophysiology vision human-eye or ask your own question.

2
Like size and colour constancy, why does the brain not maintain focus constancy?
1
Do individual neurons communicate with the origin of thoughts?
16
Are 2 eyes necessary for 3D vision?
7
How many sensory neurons are in the human body?
3
Can crows see in ultraviolet? If so, does their plumage look different in UV?
1
What is the smallest visual unit perceptible to the human eye, like a pixel? (esp. in visual static)