I'm just wondering why the femur is such that there is that head and neck sticking out of the top at an angle, why it isn't just straight up into the hips?

The answer to this great question lies in understanding the "Hip Index". I am afraid I will have to go into some technical details to explain this: 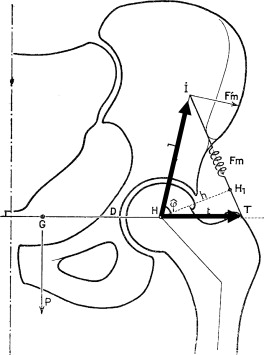 In order to do so, the hip abductors have to exert more force than the actual person's weight. This is because the length of the effective lever arm of these muscles "distance h linking H1 with the hip centre H" is shorter than the opposite lever arm "distance D between H and G representing the vertical line down from the centre of gravity".

The hip index represents the mechanical disadvantage of the abductor muscles and is around "2/1" in normal individuals. Therefor if the person's weight is 70kgs, then when they stand on one leg, the hip abductor muscles on that side are contracting at 140Kgs to stabilise the pelvis, and the person's own weight is pushing down at 70kgs from the other side, resulting in the head of femur coming under 210kgs of weight.

If the neck of femur angle becomes more straight as in your question (approaching 180 instead of the average 135), then the hip index goes up towards infinity due to the reduction in distance "h" which approches zero. This is a deformity called "Coxa Valga". If the opposite happens and the neck of femur angle becomes less straight (less than 120), then although the mechanical advantage of the abductor muscles improves, this is offset by the reduction of the actual length of the abductor muscles "distance from i to T", making the muscles weaker. This condition is called "Coxa Vara". In reality, Coxa Vara in humans is also associated with shortness of the neck of femur, which reduces the length "h" also resulting in an increase in the hip index, and an increase in the forces over the head of femur in spite of the abductor muscles becoming weaker.

Both conditions "Coxa Vara and Valga" result in the hip abductor muscles becoming less effective in stabilising the pelvis. In these conditions, the hip index can go up to 4-6/1. This means that a person weighing 70kgs could eventually end up with over 400kgs on the head of femur, leading to pain and early wear and tear. It also results in the pelvis sagging down when walking, which leads to an abnormal walking pattern called "Trandalenburg Gait".

6
Why has our nose evolved with the nostrils facing down?
2
How large is the variability in human bone thickness, and is "big boned" a real thing or not?
2
confusion regarding degrees of flexion and a goniometer
9
Can skeletal morphology change in adults?
2
What forms this pad on the side of the face?
3
How does coffee cause calcium loss in our body?