The second picture are potatoes wired in parallel. I understand that the potato is the medium for a chemical reaction between the copper and zinc. That aside, would wire and in soil potato plant continue to grow replenishing the medium(nutrients and water) regardless of having a current in the potato?

Will the plant react to the physical damage or be depleted of nutrients/water needed to weakening the current or plant?

Maybe the current can be intermittent to allow the plant to recover? Can the current be low enough not inhibit plant growth?

I would ask chemistry if I was interested how a potato clock works, but I am more interested in the plant health and connections. 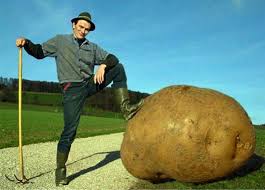 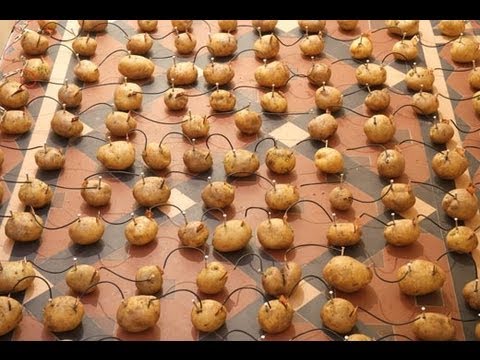 I have seen many potato experiments online but none where the potato plant was intact in the soil producing power.

Yes, the potato clock will work when still in the ground, but it won't work any better than a potato removed from the ground.

Potato batteries are awesome and cool projects, but they often convey the wrong concept. The energy produced from a potato battery is not from the substance, nutrients, or sugars of the potato, but rather via the galvanic action of the two metals inserted into the potato.

The simple counter to this mental model is to point out that you can make a battery out of salt water, which clearly doesn't have any organic, energetic molecules in it. However, I'll talk a bit more about what's actually causing this effect and why it doesn't work in the way you imagine it might. 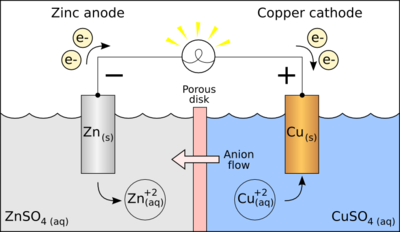 The above image is an example of a "potato battery" made without the potato. Identical setup and the energy obtained is identical given everything else the same.

This experiment is supposed to demonstrate the concept of an electrochemical cell. Electrochemical cells obtain their energy from the reduction-oxidation reactions that happen between two metals with different reduction potentials. When two metals - such as copper and zinc - are placed in a medium that permits the exchange of electrons and ions, an electrical gradient is produced as electrons move from one metal to the other and ions move the other direction. This gradient can then be captured and used to do work such as powering a lightbulb or an AI.

In the potato powered example, the power comes from zinc and copper. If you want a more powerful battery, use more zinc and more copper- not a bigger potato. If that is not good enough, try replacing the zinc with something like lithium- this is what we've done with modern, rechargeable batteries.

In truth, the potato battery would be better described as a normal battery that just happens to be inserted into a potato. You'll make a better battery if you use copper pennies and aluminum foil in vinegar.

I do not mean to shoot down your idea, and I am glad you are looking into renewable energy sources- but you may be better served by a class on electricity and batteries than by asking questions on biology.SE!

EDIT: I would assume that the electrical potential of this kind would also kill the plant, given that you're essentially electrocuting it. However, I was unable to find any information on the resistance of potato plants to electrocution.

the energy in the potato NEVER gets converted into electricity. The metals do all the work, just using the potato as a wet sponge.

Now, it would probably kill the potato though, because of all the ions that are there that shouldn't be there (zn and cu), the ~1 volt current screwing up the electrochemical gradients, etc.

So, yes, it would probably die, but not because anything gets stolen from the potato and it starves. Just because the voltage would interfere with cell functions.

Not the answer you're looking for? Browse other questions tagged biochemistry botany plant-physiology photosynthesis agriculture or ask your own question.

20
How does a plant grow before photosynthesis is possible?
6
Would a plant survive if it was watered using hard-water?
13
Is it possible to genetically modify a plant at home?
4
Is chloroplasts per cell indicative of the photosynthetic power of a plant?
1
Is galvinoxyl antioxidant assay possible using NMR spectroscopy?
3
What are these caterpillars eating a potato plant?
0
Is it possible to produce bread using only microorganisms?