Hodgkin and Huxley formulated the ion currents through the three voltage-gated ion channels Na, K, and L as

What they probably didn't know - but is known today - is, that the sodium channel possesses four voltage-sensors (S4), opposed to one ball (IFM) which may close the channel and is described by $h$: 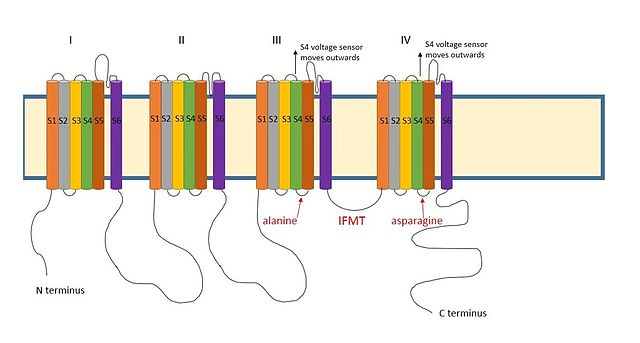 From Wikipedia, Ball and chain inactivation

Do I interpret Hodgkin and Huxley correctly, in that they found experimentally that three of the four voltage sensors must be in the up (= open) state for the pore to be open? Does this hold "exactly", or should the exponent in $m^3$ not be taken too "literally"? For example, the four voltage-sensors might be slightly different and have different deviations (when in their resp. up states), and only their "average" deviation counts, which is somehow reflected in the exponent $3$? The question then arises, why the exponent is an integer number. Couldn't it be any real number then?

Reset to default
Highly active question. Earn 10 reputation (not counting the association bonus) in order to answer this question. The reputation requirement helps protect this question from spam and non-answer activity.

4
How does the flow of ions along voltage-gated channels lead to nerve conduction along axons?
0
Functional role of voltage-gated potassium channels
0
How do firing patterns arise from the activity of many ion channels?
0
Understanding Hodgkin-Huxley's model and activation variables
2
Causes of the stochastic behaviour of voltage-gated ion channels
1
Why don't sodium Voltage Gated Channels open during Repolarization?