Short answer
Nigrum is Latin for 'black'. As you write in your post, it's black pepper and black nightshade. Not until the level of Class and Phylum do they share the same taxonomic classification. Hence, the species suffix nigrum doesn't tell you anything about their kinships, other than their physical appearance (they're both black).

Background
In general, the species part of the linnaeus nomenclature has nothing to do with evolutionary relationships. Instead, it is the higher classifications that denote kinships, for example, as you already suggest, the genus name, that may have various related species in it (Fig. 1). The species you mention are of a different genus.

They share only the same Class (and hence Phylum, Kingdom, Domain). For comparison, in the Kingdom of Animalia, we have the Phylum Chordata (vertebrates), that splits up into the Classes Mammalia (Mammals), Actinopterygii (Bony Fish), Chondrichthyes (Cartilaginous Fish), Aves (Birds), Amphibia (Amphibians) and Reptilia (Reptiles). So your two plant species share as much in common at the taxonomical level, as Mammals and bony fish.

Piper nigrum (or black pepper), is a climbing vine in the Piperaceae (pepper family) native to the Malabar region of southwestern India. Black pepper is grown in various tropical regions, including India, Indonesia, and Brazil, as it is one of the most important spices in the world. 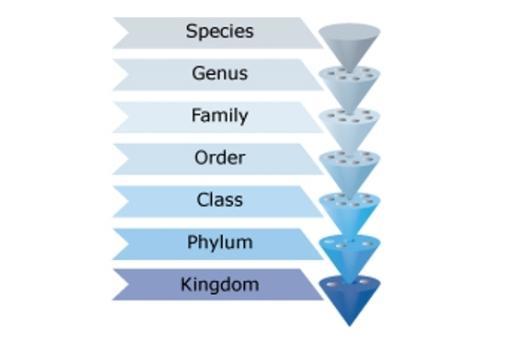 On botanic, the scientific names are: monomial, binomial or trinomial, so having just one word, two words or three words (words attached together, and words attached with a hyphen are calculated as a single word).

So, from top to Genus (inclusive), we use only one word. So names should be unique, and taxa sharing the same name have some common characteristic (or better: a common evolutionary past). Note: there are few cases with same Genus name in botanic and in zoology, for a different genus. [On botanics, with the exception of Genus, looking at suffix of a name, gives you also the rank of such name. If you doesn't recognize and it is not plural, it is a Genus. Else it is unranked clade]

Then there are binomial names, just below Genus to Species. With exception of species, where is an abbreviation which define the rank between the two names (e.g. subg., sect., ser.). The second name just specify the genus, so e.g. in Solanum nigrum, the nigrum specify which Solanum. Just the word has no meaning.

To be complete, there are also trinomial names (e.g. subspecies, varieties and forms): the first two part are the specie name (so binomial) plus an abbreviation of rank plus the detailed name. Also in this case it has meaning only together with the first two names.

You choose two species with nigrum, and luckily both had black berries. But it is not always so. Helleborus niger (niger is the masculine, nigrum the neutral) has nothing related to black, but if you dig the roots.

Source: The International Code of Nomenclature: http://www.iapt-taxon.org/nomen/main.php?page=title and his companion book: The Code Decoded (where you see such exception and examples, but many of them are put as example directly in the ICN).

10
Is sexual reproduction outside the same biological family possible? Has it ever occured successfully?
16
When has an organism evolved enough to be called a new species?
43
Do humans have enough biological differences to be grouped into races or subspecies?
5
Binomial nomenclature: Why am I seeing different genera with the same species name?
4
Why does capsaicin irritate mammals and also kill fungi? Are the two related?
11
What instances are there in which two species share the same binomial name?
20
Can 'human' become a genus due to space colonization?