What is the exact frequency of Delta brain waves during Slow Wave NREM Sleep?

I saw a TED talk about researchers playing pulsating pink noise while a test subject is in Stage 3 Non-REM / Slow Wave / Deep sleep and observing an increase in Delta wave EEG activity. This seems to indicating that the burst frequency of the pink noise is matching the dominant frequency of the Delta waves. (Skip to 5:00 to hear a sample of the sound)

My question: While a spectral analysis shows a range of brain wave frequencies, and many sources define a range such as "0.5-4 Hz", I'd like to find a more precise dominant frequency of Delta waves.

The video inspired me to write my own small computer program to make my laptop play a similar pulsating pink noise pattern on the table next to my bed last night. I arbitrarily chose 1 Hz as the pulse frequency, and the following pattern:

So roughly 5x 90-minute sleep cycles with an increasing ratio of silence to noise to mimic the ratio of REM to NREM as the night progresses. I've read that REM is characterized by un-synchronized brain waves and NREM is where you see large amplitude synchronized Delta waves which the sound experiment is trying to help stimulate. Tonight I will wear my FitBit bracelet with heart rate and sleep stage tracking to see if the readings match the sound schedule. 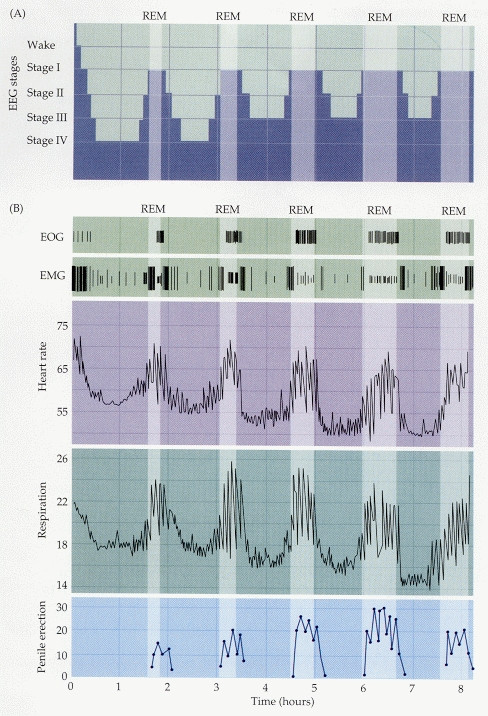 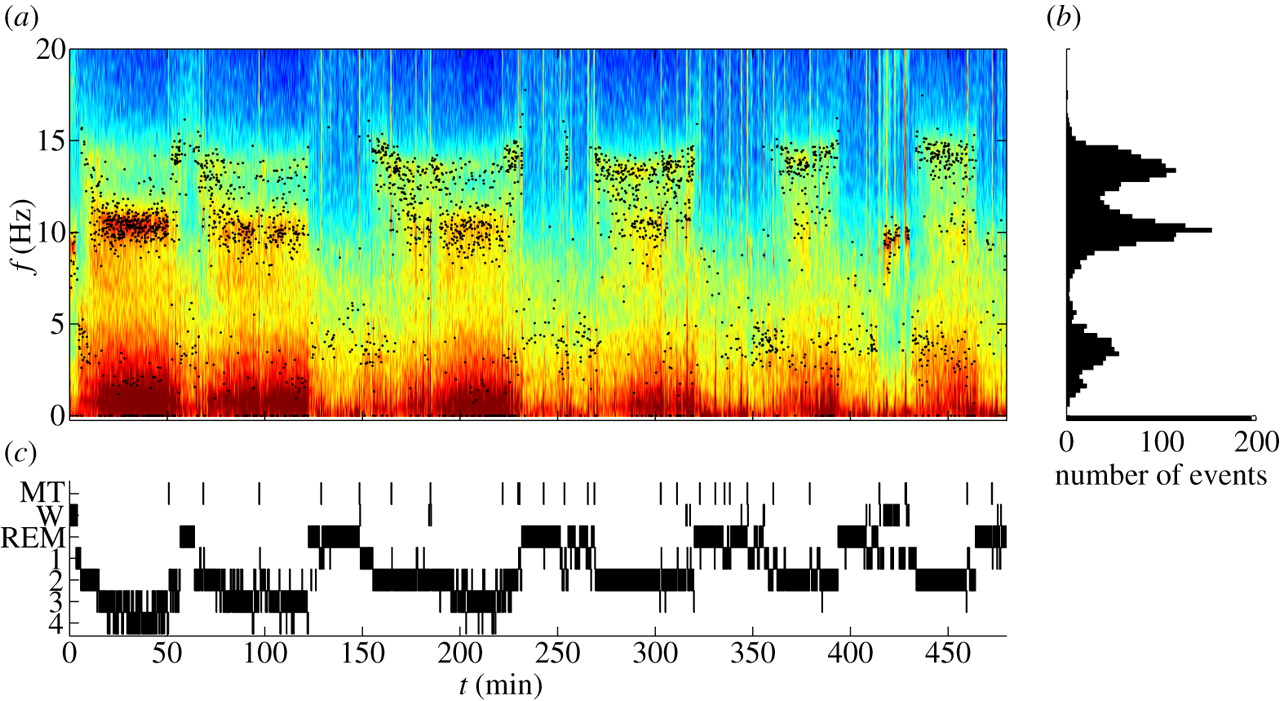 Periklis Y. Ktonas and Atul P. Gosalia performed such an analysis. It was published in 1981 under the heading "Spectral Analysis vs. Period-Amplitude Analysis of Narrowband EEG Activity: A Comparison Based on the Sleep Delta-Frequency Band"

The bins were quite wide but their analysis showed peak power spectrum moved between 0.84 and 1.96 Hz at different times.

I think the paper would serve you well, as it highlights the difficulty in achieving what you have set out to achieve. The frequency is not constant, even over short timescales. It depends for the most part on a balance between the intrinsic, basal polarity of thalamocortical neurons, and the effect of synchronising, inhibitory input from the reticular nucleus. The latter is in turn subject to cortical feedback. There are huge numbers of neurons involved. The period between bursts, and the number of action potentials per burst, is quite variable.

Perhaps it might be possible to set up a device that alters the round in real time, based on the EEG measurement.

With regards to your 'bonus' questions:

(1) The video posted does show an effect on the thalamic rhythm, which is surprising, as it had been thought that in deep sleep, sound has no effect on the thalamocortical circuit, since it is gated at the thalamus. This shows the plausibility of the hypothesis. However, the video does not provide any evidence that this alteration in rhythm is beneficial. It is possible that it is not and this possibility should be eliminated.

(2) Clearly the sound has an effect on the rhythm, so it seems entirely plausible that there is an optimal sound to maximise the effect.

(3) It will be hard to organise the phase, given the continuous, rapid shifts in period, unless done in combination with EEG in real-time.

(4) I am not aware of any research attempting to correlate thalamic rhythms with heart beat, although it would be quite easy to do. However it is highly unlikely there is a correlation, since the thalamocortical period has a lot of variation moment to moment, whereas the heart rhythm does not. Also the thalamocortical rhythm is generaly somewhat faster.

Not the answer you're looking for? Browse other questions tagged neuroscience physiology brain neurophysiology sleep or ask your own question.

2
Do brain cells shrink during REM sleep or a lucid dream?
5
Does playing music during sleep actually suppress rather than rouse the brain?
5
What in the brain has gone awry during sleep paralysis?
2
What is the mechanism behind the F-Wave?
3
What is the significance of the amplitude of brain waves?