Intermediate of Krebs cycle that can form Chlorophyll?

This was a question in a test in my school today.

Q) Which intermediate of Krebs cycle further can form chlorophyll?

Given answer was (C).

How can Succinyl CoA form chlorophyll? All I could find was related to porphyrine ring. Can anyone explain it or recommend a good source?

The standard treatment of this topic is covered in Section 24.4.3 of Berg et al., available freely online:

Succinyl CoA is a precursor for porphyrin in mammalian cells by condensing with glycine to form δ-aminolevulinate as shown in this diagram from that book:

This reaction is catalyzed by mitochondrial δ-aminolevulinate synthase.

To quote from that reference:

Two molecules of δ-aminolevulinate condense to form porphobilinogen, the next intermediate. Four molecules of porphobilinogen then condense head to tail to form a linear tetrapyrrole in a reaction catalyzed by porphobilinogen deaminase. The enzyme-bound linear tetrapyrrole then cyclizes to form uroporphyrinogen III, which has an asymmetric arrangement of side chains. This reaction requires a cosynthase. In the presence of synthase alone, uroporphyrinogen I, the nonphysiologic symmetric isomer, is produced.

This is illustrated in Fig. 24.35 of that section, which also shows that uroporphyrinogen I gives rise to protoporphyrin IX, the precursor of haem: 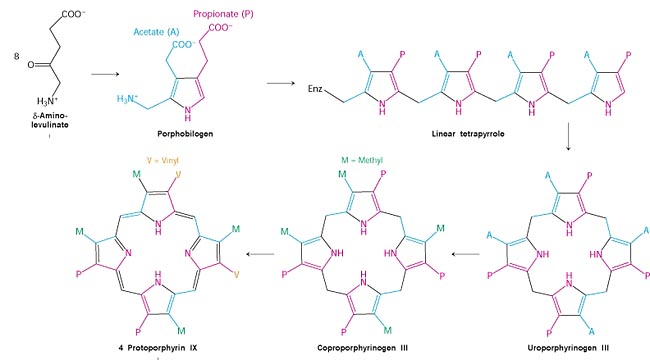 As regards the synthesis of plant chlorophyl (which also contains a porphyrin ring), the review quoted by March Ho contains the following statement:

However the review goes on to explain that although 5-aminolevulinic acid synthesized in plant mitochondria uses the same pathway as mammals, that produced in the chloroplast and used for the synthesis of haem that gives rise to chlorophyl uses a different pathway, termed the C5 pathway, in which — as March Ho stated — glutamate is the precursor:

I suspect that the person who set the question is an animal or biochemist who thought he would try a variant of the standard question “which intermediate is a precursor of haem”, and ventured into waters where he was out of his depth.

The full biosynthetic pathway of chlorophyll is a very complex process, and there are dozens if not hundreds of different steps and enzymes involved. This is one paper that attempts to cover the issue.

Not the answer you're looking for? Browse other questions tagged biochemistry homework photosynthesis cellular-respiration or ask your own question.