I want to note that I am not a biologist. I've been on a nearly 20-year search for the identity of the parents of my 4th great grandfather (not an easy task.)

I'm using ancestry.com DNA, GEDmatch, and family trees of my matches in hopes of using DNA triangulation to find my ancestors. In addition, I have a half-sibling who also had his DNA tested which allows me to find common ancestors on this side of the family.

I read the article "Relatedness" on the topic of inherited parental dna with two half-siblings and I'm not sure I understand what the writer means when she says:

In other words, you and your half-brother should be able to figure out what part of your DNA came from your mom. And if you subtract out that shared DNA, what is left must have come from your dad!

My first thought was that a person and their half-sibling wouldn't inherit exactly the same DNA from their mother, could they? For example, the mother has two different alleles for some trait. Her son could get a copy of one and the daughter could get a copy of the other. Therefore, in the author's example, how could subtracting out the shared DNA with the brother give the girl the ability to identify exactly which DNA must have come from her dad?

I read on and the author addresses this by saying:

It turns out, though, that it’s really unlikely that siblings would have two totally different versions of a chromosome. This is because of something called recombination.

She's talking on entire chromosomes here which is different, but it doesn't seem to address fully why the girl should be able to 100% identify what DNA came from her dad by subtracting the shared DNA with her brother. I read that half-siblings share 25% of the DNA, but the mother here surely contributed more than 25% to each of her children.

I would take the writer's word for it, but I'm confused. Where am I going wrong? (Sorry about the bad biology background.)

The website is just wrong when it says for DNA tests on a person and their half-sibling:

In other words, you and your half-brother should be able to figure out what part of your DNA came from your mom. And if you subtract out that shared DNA, what is left must have come from your dad!

Consumer autosomal DNA tests do not identify which of the two chromosomes present in the sample a detected variant can be assigned to. The tests show only the two variant values detected at each location tested, and not which chromosome they come from.

Using this data from two tests, comparisons can show stretches of chromosomes which have matching patterns of variants which indicate with good probability that the corresponding pieces of chromosome have the same origin. The tests do not tell you about the source of the pieces outside these stretches.

Each of two half-siblings do get half of their autosomal DNA from their common parent. On average, half of the DNA each gets from that parent will also be inherited by the other half-sibling, and so will show up as matching stretches when the tests are compared. Thus half-siblings will show around 25% shared DNA (around half of the 50% that comes from the shared parent).

There are two spots on that web page that do get this right. One is in this diagram: 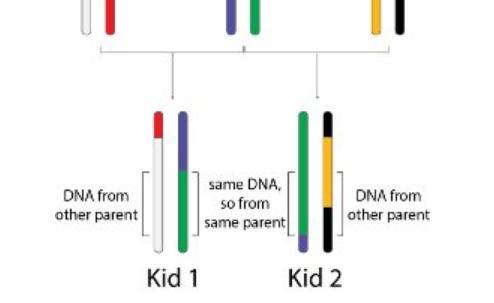 In the above, the bracketed area does identify the associated parents, but the unbracketed areas cannot be so identified. (The colors shown are not reported by the DNA tests, so you can't just "follow the color" to identify matching chromosome areas outside the brackets.)

The other spot the web page gets it right is in this paragraph:

By finding the shared DNA, the brothers can find the pieces of the 23 chromosomes that came from their shared parent, just like we did for chromosome 1. Any genetic information from the DNA on the corresponding sites on the other 23 chromosomes will tell the brothers about their fathers.

Outside of these two places the web page seems to mislead one into thinking that all the DNA can be associated with the correct parent, which is not the case without the parents being tested.

Not the answer you're looking for? Browse other questions tagged human-genetics or ask your own question.

2
Is it really detrimental to humans as a species to reproduce with one's own first cousin?
5
Implications of what the discovery of Naia means
4
Proving time travel
2
Prader-Willi Syndrome and Angelman Syndrome?
3
How likely is it that a person's progeny has an inheritable disorder based on this pedigree?
8
If a mother had a child with her own son, could a paternity test yield positive result for the son's father?
0
How closely related will your descendants be to you?
1
DNA Inheritance- Math vs. Biology
3
In our 23 chromosome pairs, do the 2 members of the pair have distinct or virtually identical sequences?
6
What is the criterion for genetic similarity among siblings and humans in general?