How does the counter-current multiplier work in the nephrons?

Why is the counter-current multiplier called like that? What is flowing in the opposite direction to the glomerular filtrate for it to be called "counter-current"?

Can you please explain the counter-current multiplier mechanism in the loop of Henle in the nephron, including details about the ascending limb, descending limb and the collecting duct?

I have searched it everywhere and I cannot find a satisfactory explanation that I can fully understand.

What is flowing in the opposite direction to the glomerular filtrate for it to be called "counter-current"?

The filtrate is moving in the opposite direction of the filtrate. It's a loop. Filtrate moves in two directions relative to the nephron, down (from the cortex toward the papilla/through the medulla) and up (from the medulla to the cortex). We'll start with up, because that's where the active transport occurs

By itself, the active transport of solutes out of the filtrate and into the ECF on the way up the ascending limb, (with dilution again by the water on the way down the descending limb) would seem to make only a small difference, but consider what happens as the filtrate continues to flow, while the ECF doesn't. 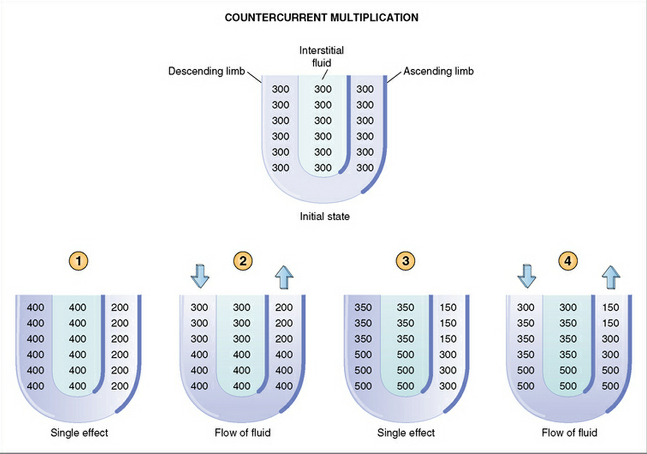 After being presented with countercurrent multiplication, students will often ask how it is that solutes and water equilibrate horizontally in this diagram (i.e., between the descending limb and the ECF), but not vertically. This is a different question, and is where you start to need yet another compartment, the blood in the vasa recta. This mechanism is called countercurrent exchange, but is the answer to another question (how come the corticomedullary gradient doesn't dissipate?).

In addition to physiology texts (e.g., Costanzo Chapter 6), you can read one of the most important original papers supporting this mechanism. Originally published in 1959, it was reprinted here in 1997 and available for download. See if you can follow the connection between the data and this mechanism.

Water in the glomerular filtrate moves out of the descending loop of henle due to the higher concentration of salt in the medulla. The higher concentration of salt in the medulla also moves down it's concentration gradient into the descending loop. The salt is pumped from the glomerular filtrate into the medulla in the ascending portion of the loop of henle. Salt, water and additional molecules can also be reabsorbed into the body in the distal convoluted tubule and collecting ducts and can be regulated by hormones to control salt and water excretion and retention which can affect blood pressure. The proximal convoluted tubule reabsorbes an increased amount of necessary molecules such as 100% of glucose and amino acids.

Not the answer you're looking for? Browse other questions tagged kidney renal-physiology osmoregulation or ask your own question.

4
How is Hypertonic Urine Produced in a Mammalian Kidney?
3
How does the counter current mechanism concentrate urine?
1
Is the PCT of the nephrons of the kidneys of marine vertebrates to minimize the natural tendency for exosmosis?
0
Does sodium lower the harmful effect of potassium on kidneys?
1
Can polystyrene sulfonate bind calcium or sodium in the gut? How?
4
How is the renal osmotic gradient maintained even though the blood osmolarity changes?