I'm translating a text that describes how an immunogenicity of a drug is measured by assaying the levels of binding antibodies to the drug. Or is it "against the drug"? I'm wondering how to name these antibodies. Let's say the drug is cetuximab, and I'm writing the title of a document section:

P.S. Alas, it is exactly "binding antibodies to" in my Russian text. I cannot omit the adjective "binding" before "antibodies"..

I quote from the Wikipedia page on neutralizing antibodies:

My authors use the adjective "binding" to distinguish binding antibodies from neutralizing antibodies, just like in this paper, for instance: BAbs and NAbs. Another section in my document gives the results of an assay of NAbs against the same antigen.

Explanation of the difference between binding and neutralizing antibodies from the FDA: 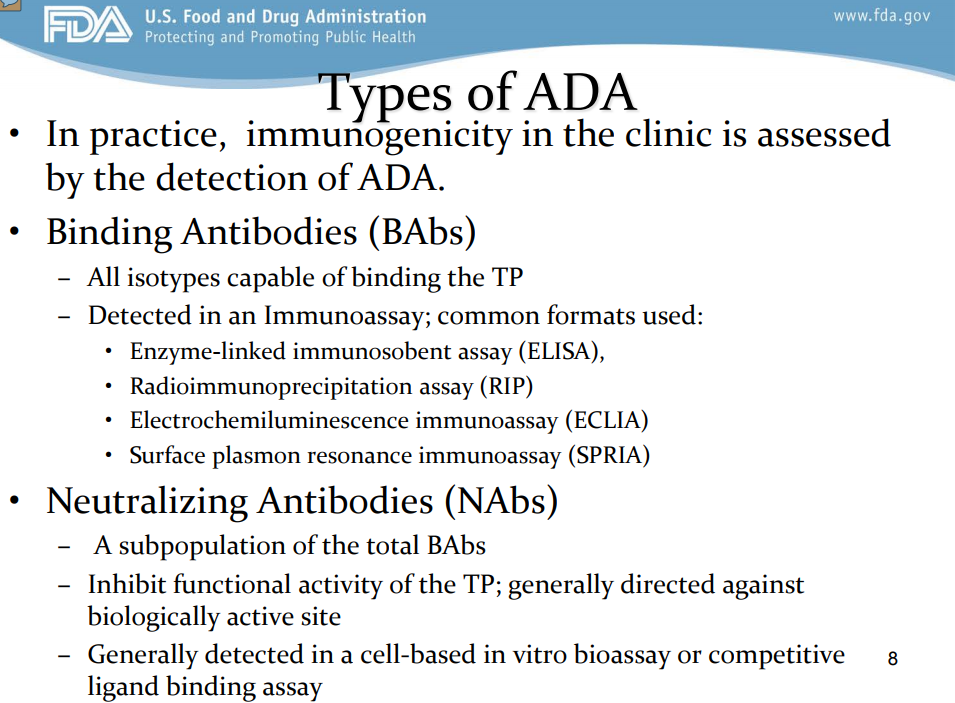 The adjective “binding” is not used to qualify “antibody” in English scientific usage because linguistically it is thought to belong with the antigen the antibody binds.

Generally it is omitted if the prefix “anti” is used, e.g.

However if you wish to refer to the particular small portion of the antigen that is recognized (the epitope), you might write, e.g.

As far as the use of prepositions is concerned, “to” is used with binding, although it is optional. However generally with the antigen, e g.

cetuximab binds to the antibody

(e.g. “Antigen binds to the antibody on the B-cell membrane.” here)

Completely illogical, I know, and this distinction is not universal.

However, “against” is used in relation to preparing or raising antibodies, e.g.

We raised an antibody against cetuximab…

So in general one would write:

The revised question makes it clear that the authors are referring to “binding antibodies” as a specific contrast to “neutralizing antibodies”. This expression was not known to me (I am not an immunologist), and, although the poster documents it, its use would appear to be limited, perhaps because the topic is or was controversial.

The question remains, how to express this idea in a clear and unambiguous manner, with the specific problem that the poster is a translator, not an editor. I would still try to avoid the use of the word “binding” in the expression. I have two suggestions:

Not the answer you're looking for? Browse other questions tagged terminology antibody or ask your own question.