I am reading the WHO Global Antimicrobial Resistance Surveillance System (GLASS) - Manual for Early Implementation. it mentioned some of the drug-bug combination that will be put under surveillance in page 8 of the following link, I have screen-captured the page below that I have some questions. 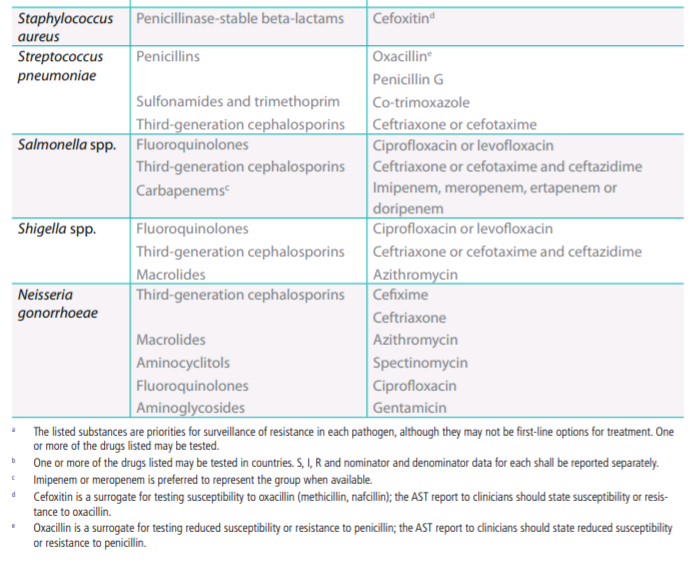 For S. aureus, Cefoxitin is selected for surveillance, but the remarks mentioned that Cefoxitin is a surrogate for testing susceptibility to oxacillin (methicillin, nafcillin). I know S. aureus showing resistance to methicillin is MRSA, but why test for Cefoxitin but not test methicillin directly?

The same question goes for S. pneumoniae for Oxacillin as a surrogate for testing reduced susceptibility or resistance to penicillin. Why not directly test for penicillin?

Sorry that I am not a microbiologist, just a data analyst recently working on microbiological data, hope that I won't be asking something too stupid.

This is not a proper answer as such and it's based on a bit of an 'educated guess' but it was too long for a comment.

I did however, find this article. Unsurprisingly, one of the big drivers of using surrogate antibiotics is down to availability and cost. Some antibiotics, while known about, may not be produced commercially at scale, or be widespread enough for testing facilties around the world to use. Consequently, the WHO can maintain a list of antibiotics with complementary 'cross-talking' modes of action, so that a resistance mechanism can be probed without needing the specific antibiotic.

Another reason for using a surrogate might be to avoid some of this cross-talk. I.e., if you wish to know the effectiveness of (say) imipenem, and you know imipenem and meropenem have the same mode of action, but perhaps the bacteria has a second resistance pathway that is specific for imipenem - you could use meropenem as a surrogate, knowing that it won't be degraded/removed by pathway 2, and you can still probe the mode of action.*

*(This is a contrived example, I have no idea if you'd ever use those 2 antibiotics in this manner.)

It seems like, from reading online, the real drivers to use surrogate testing however, are purely as an interim measure due to the enormous lag phase between discovery of new drugs, testing, scale up, administrative approval, and then general market availability.

Not the answer you're looking for? Browse other questions tagged microbiology bacteriology lab-techniques antibiotic-resistance or ask your own question.