After the primer is removed from the leading strand, how does DNA polymerase I add dNTPs without a 3'-OH?

I have a question about replication in prokaryotes. I learned in school that:

It makes sense that on the lagging strand the primers are removed and then replaced by new dNTPs using the 3'-OH of the previous Okazaki fragment. However, for the primer on the leading strand, there is no Okazaki fragment upstream and thus no 3'OH that DNA polymerase can use for polymerisation.

How is the primer replaced by new dNTPs on leading strand?

First consider the DNA replication fork after initiation has occurred.

Remember that the reason for Okazaki fragments is that there is no DNA 3'-OH primer for the lagging strand, so a temporary RNA 3′-OH primer is generated instead, RNA polymerase — unlike DNA polymerase — is able to copy DNA without a primer. There is no such problem for the leading strand. 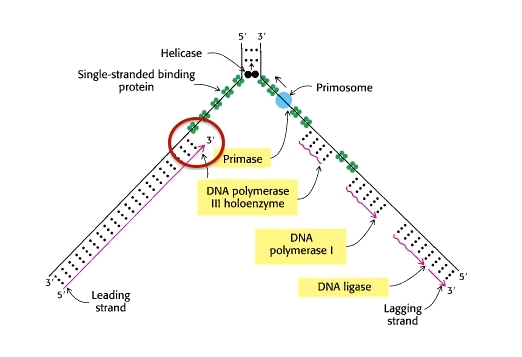 The leading strand at the origin of replication

As @canadianer points out in a comment, the remarks above do not apply to the initiation of DNA replication, the single instance where the leading strand must have an RNA primer. In the case of prokaryotes such as Escherichia coli replication proceeds in both directions so that a short time after initiation one has a replication bubble as shown in the figure below (adapted from Russel, iGenetics) :

It can be seen that, at the origin, the 3′-OH of the DNA from the lagging strand of the other direction of replication (boxed in red) can act as a primer for the DNA synthesis function of DNA polymerase I, after its exonuclease activity has removed a nucleotide from the start of the RNA primer on the leading strand.

There was a typo in the original question which caused confusion about which strand the poster was concerned with. This answer assumes the leading strand.

Not the answer you're looking for? Browse other questions tagged dna-replication primer or ask your own question.

2
How are DNA segments selected in PCR?
3
Does DNA polymerase I require a $3^\prime$ end?
3
DNA replication: How many DNA polymerase molecules work in parallel?
4
Do telomeres appear at just one end of the chromosome?
0
How are single-stranded binding proteins removed from the lagging strand during DNA replication?
1
Why is exonuclease action an important proofreading mechanism?
3
Does DNA ligase have any role to play in replication on leading strand?