How do cells relocate transmembrane proteins from one side of the cell to the other? Is it possible?

Is there a process by which cells can relocate proteins residing on the cell membrane in areas of low demand to that of a high demand location somewhere else in on the cell? What's that process called?

Through protein catabolism, cells can break down the proteins into their individual amino acids and then reuse these resources to build new proteins in needed locations. This process seems inefficient if the cell simply needs to move a transmembrane protein (for example integrin or cadherin) from one side of the cell to the other.

I hope the question is clear. I haven't taken a biology course since early high school (8 years ago) so if there's something i need to clarify let me know!

Transmembrane proteins can move laterally through the plasma membrane (see fluid mosaic model) and this movement can be actively directed along the cytoskeleton. The following paper is the most salient example that I found of transmembrane proteins moving from one side of the cell to the other:

Productive T cell recognition of antigen-presenting cells (APCs) is normally accompanied by the formation of a cell–cell contact called the “immunological synapse.” ... T cell receptors are recruited in bulk within the first minute after the onset of activation...

The following figure, adapted from the paper, shows the time-lapsed movement of GFP (ie fluorescently) labelled CD3, which is part of the transmembrane T-cell receptor complex, during synapse formation with an APC: 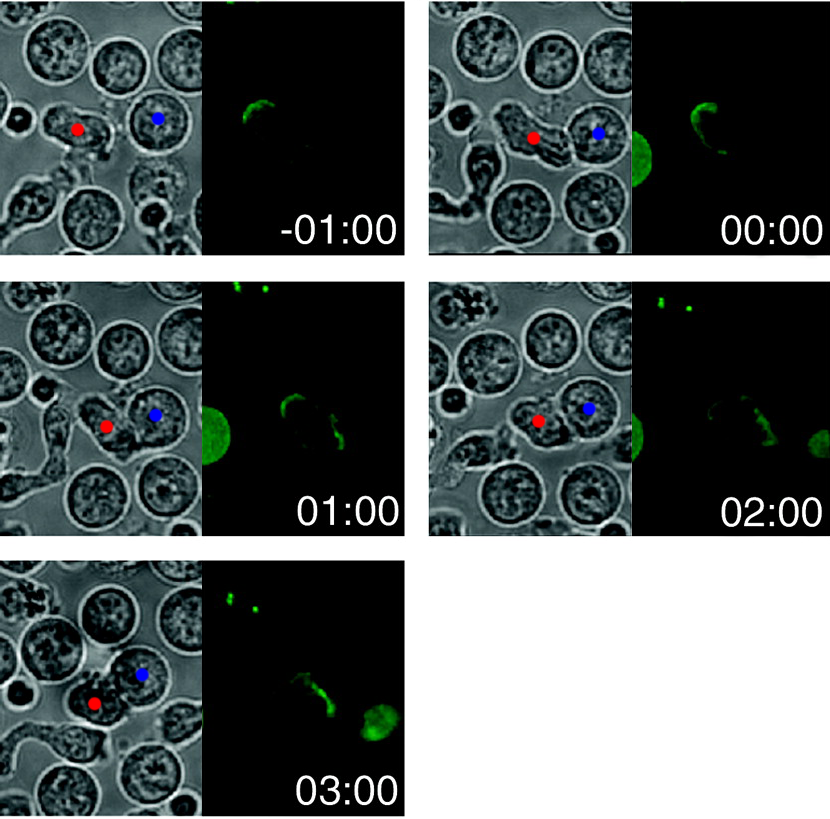 Time is in minutes, and zeroed at first contact between the two cells. I've put a red dot on the T-cell and a blue one on the APC in the DIC images (left panes); hopefully that proves more informative than annoying. The right panes show GFP fluorescence and thus CD3 localization. As time progresses, CD3 is re-localized from one part of the membrane to another (the synapse). There is supposedly a video of this is in the supplementary information of the article, though I was unable to open it.

The rate and directionality of the movement implies that an active process is occurring, rather than simple diffusion. However, they did not find the actual mechanism for movement and I haven't found any follow-up papers in a brief search (though many subsequent papers implicate the cytoskeleton in this movement). Just to show that movement of transmembrane proteins can, in fact, be actively directed by the cytoskeleton, I refer you to this paper:

They show that membrane-spanning integrins are moved along actin filaments of the cytoskeleton by myosin motor proteins. Expectedly, the abstract does a good job of summarizing the paper:

The cycling of membrane receptors for substrate-bound proteins via their interaction with the actin cytoskeleton at the leading edge of growth cones and other motile cells is important for neurite outgrowth and cell migration. Receptor delivered to the leading edge binds to its ligand, which induces coupling of the receptor to a rearward flowing network of actin filaments. This coupling is thought to facilitate advance... [T]ransport was dependent on an intact actin cytoskeleton and myosin ATPase...

The breakdown and reassembly of proteins is a ubiquitous process within cells, and yes this is expensive but transport is expensive, too, and recycling has the added benefit of dealing with proteins that become misfolded or otherwise damaged as well as allowing for transcription and translation to regulate overall protein levels. The Toyoma & Hetzer 2013 review (see references below) cites estimates of the median protein half-life in a non-dividing mammalian cell to be about 43 hours, though they discuss some exceptions that do last much longer.

However, it is possible to relocate transmembrane proteins via vesicles.

Essentially the same way proteins are put in the plasma membrane in the first place, but in reverse. Endocytosis is often taught as a way that cells (often macrophages are used as an example) take in materials from the outside world, but it is just as applicable to internalizing chunks of membrane. Nature has an entire 'web focus' on entocytosis reviews.

One situation where this happens is in synaptic plasticity; receptors can be internalized or trafficked to the membrane to decrease or increase the potency of that synapse, respectively (see Carroll et al., 2001), but similar processes occur all over (and some proteins constantly cycle back and forth; see Trowbridge et al. 1993 for a more general review, though a bit dated).

However, to your specific question, I don't know specifically of examples where transmembrane proteins are literally cycled from one side of the cytosol to the other. There may be examples I am not aware of, but my understanding is that it is more typical to think of a "store" of certain proteins in endosomes, from which they can be trafficked to the membrane and reinserted via exocytosis. Probabilistically, some will be transported from one place to another, but not so much in a stepwise fashion.

Not the answer you're looking for? Browse other questions tagged cell-biology proteins transcription cell-signaling intracellular-transport or ask your own question.

0
How do transmembrane proteins bind to specific locations on the membrane?

9
Methods of nuclear transfection - nuclear transport
5
Can proteins move outside cells?
17
Contact Inhibition of Cell Division: Signaling Pathway
6
How would one go about identifying unknown cell cycle checkpoint proteins (i.e., cyclins)?
1
Why do many cells together survive better than one cell alone?
1
How do tumor cells 'gravitate' towards each other?
4
Is alternative splicing possible in the same cell?