What is "integrated spindle activity" in plain English?

From a research article:

To determine if a combination of spindle parameters allowed for a better group discrimination, integrated spindle activity (ISA) was calculated by integrating over time the amplitude of each detected spindle (and by dividing by non-REM sleep duration). We found that integrated spindle activity was markedly reduced in amplitude and number of detections during the first sleep episode in the schizophrenia group in relation to the comparison and depression groups (Figure 3A).

Is this ISA parameter calculated using integrals? I vaguely recall integrating functions in the university, but by now I've forgotten all - that was too long ago. And I don't know how one would "integrate" not functions (like we did in the university) but spindles. And what is the meaning of "over time"?

In short, I'm curious what this ISA parameter stands for. Is there a way to describe it in plain English?

Spindles are brief bouts of (relatively) high-frequency oscillatory activity that occur occasionally during sleep - often they are called "sleep spindles."

Figure 1 of the paper you link shows their method for detecting and measuring these spindles. 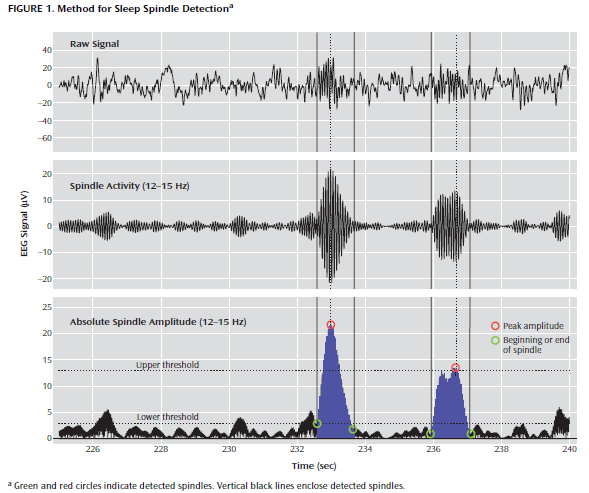 In summary, the top trace is a raw EEG trace. Spindles are present in this trace, but the authors want to quantify spindle activity in some way. By filtering between 12-15Hz, the spindles become more obvious (middle): they are the high-amplitude things bracketed by vertical lines.

On the bottom, they have rectified and smoothed the signal to approximate the amplitude of the spindles (that is, they aren't interested in the area under the curve in the middle plot, which has negative and positive going components, they just want a measure of the whole event).

They are defining the integrated spindle activity as the integral (i.e., the area under the curve, just like in calculus) of bouts of activity that exceed some threshold, indicated by the area shaded blue.

In summary, to answer your question, there isn't really a better or simpler English way to say "integrated spindle activity" without losing information for the reader - they are indeed referring to mathematical integration. You could say something like "total spindle activity" but then it is much less clear how exactly you are quantifying spindle activity. Probably the best plain English description of integration is the 'area under the curve' of a function or measurement, though this isn't a perfect mathematical description.

As someone who is familiar with general methods for analyzing electrophysiological data, it was pretty clear to me what they meant by "integrated spindle activity" before opening the paper - this is a fairly common way to report the amplitude of oscillatory activity, because it captures both average amplitude and duration in a sensible way.

A pretty good approximation is to say that they are summing the activity of (rectified) spindle events, since we are talking about discrete signals.

And what is the meaning of "over time"?

This procedure presupposes that they have identified the beginning and end of a spindle event, hence the integration is done within that interval.

There are plenty of ways to calculate a discrete integral, for example by using Riemann sums or just taking the regular sum, but none of the details matter much for all practical purposes in signals such as those dealt with in the cited paper.

Not the answer you're looking for? Browse other questions tagged neuroscience sleep electroencephalography or ask your own question.

15
What causes REM atonia to be lost in sleepwalking?
3
Is "tonic activity" common for neurons firing in the brain?
13
What are the effects of sleep deprivation?
7
Behavioral change in dolphins during different hemispheres activity periods?
3
Development and function of spindle neurons
2
Metabolic activity postmortem
3
Neuron activity on body parts measurable?
2
What causes sleep inertia?