Is it possible to make anaerobic media too reducing?

I've been struggling to grow an anaerobe (P. gingivalis), I take every precaution to keep the culture conditions free of oxygen, I was wondering if the conditions can be so reducing that they inhibit microbial growth of an obligate anaerobe.

To make the liquid media I do the following:

Other protocols I have found are much more vague/lax about removing the oxygen, many just say that the cysteine should be added, and the media should be incubated in an anaerobic hood for 24 hours with the lid loose before being used. This got me thinking that maybe I'm removing too much of the oxygen.

What do you think?

I notice that you don't specify pH, which might be important.

I don't know if you can put in too much reducing agent (I suspect not), but a large excess is often required as the equilibrium constants for disulfide exchange reactions are typically close to unity (see Cleland, 1963).

I also don't know if any of following has any relevant to your problem (again, I suspect not), but I want to briefly comment on two aspects of using thiols to as reducing agents in general.

Firstly, the oxidized (disulfide) form of thiols may react with a protein sulfhydryl. Using β-mercaptoethanol as an example (Scopes, 1993, p 320), something like the following may occur, where the reducing agent becomes (reversibly) bound to protein. If the reactive sulfhydryl is at an enzyme active site, this may lead to inactivation.

As stated, equilibrium constants for thiol exchange reactions are often close to unity (Cleland, 1963)., $$\ce{R1-S-S-R2 + R3-SH <=> R1-S-S-R3 + R2-SH \tag{3}}$$ For this reason, many protein chemists prefer to use dithiol analogs of threitol (dithiothreitol, DTT, or Cleland's reagent) or erythritol as reducing agent, as the oxidized form of these compounds are cyclic disulfides, where the equilibrium constant is displaced to the right (see Cleland, 1963).

There is also the question of stability. 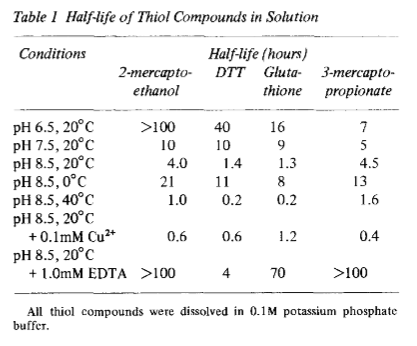 The above table was taken from Stevens, R, Stevens, L & Price, N.C (1983) The stabilities of various thiol compounds used in protein purifications, published in (the now-defunct) Biochemical Education. The full article is freely available as a pdf from the Wiley website

Not the answer you're looking for? Browse other questions tagged microbiology bacteriology cell-culture anaerobic-respiration or ask your own question.

14
Where is the line between Anaerobic and Aerobic?
6
What's the biggest obligate anaerobic organism discovered till now?
1
Why do anaerobic bacteria require a low redox potential for their culture media?
3
Do sulfate reducing bacteria ingest their sulfate as solid, or as dissolved in water?
3
Facultative anaerobic organism