Is there a point in our life when ALL the atoms from our childhood's body get replaced?

The evolutionary biologist and Oxford professor Richard Dawkins makes on his TED talk the rather interesting suggestion that we human beings, are in nature more similar to a wave than an object. In the sense that we are a persistent structure travelling trough a constant flow of atoms that only transiently form part of our body. Citing Steve Grand and his book Creation: Life and How to Make It, he argues that the body of a grown up man doesn't preserve any of the atoms that formed his body by the time of his earliest childhood's memories. Is that fact widely accepted by the scientific community?

I know that this question is a duplicate of Are all body atoms really recycled several times during a life? (or this one), however I want to put the emphasis on the atom constituents of cells, as the accepted answer there doesn't fully answer that question. Following those answers and the references within, a consensus seems to exist that most of the body is in constant renovation, with the exception of the cells in the cerebral cortex and the inner lens of the eye, whose cells persist trough life. But to what extent cellular metabolism replaces individual constituent molecules and atoms throughout those cell's life? Is that true also for DNA? What about mitochondrial DNA?

Are the processes that repair DNA damage operating only in damaged areas? Or do they constantly "repair" also healthy areas leading to the constant replacement of the atoms that constitute the DNA?

Others argue that tooth enamel does not regenerate or get replaced, been that what allows carbon dating to be accurate to the year of birth plus or minus a few months. However, as my question begins with a philosophical issue, I'm mostly interested in the atom constituents of the cerebral cortex. I am in particular aiming to figure out if we are more precisely described as a brain travelling through time or just a wave in a sea of atoms.

Is there a point in our life when ALL the atoms from our childhood's body gets replaced?

No. There is no point where ALL atoms have been replaced.

This has been shown by tracing distinct carbon isotopes in DNA [which reflect upon atmospheric 14C at the year of their generation (which reflect the extent of human atom bomb testing)]; Bergmann et al. 2009, Science: Evidence for Cardiomyocyte Renewal in Humans.

for your other questions:

Is that fact widely accepted by the scientific community?

The phrasing of Richard Dawkins, which you also list, uses "more similar" (rather than the absolute ALL). These words provide quite an accurate approximation to express that most building blocks of cells undergo a constant renewal. The choice of words of Grand seems a bit unlucky, if read out of context.

Are the processes that repair DNA damage operating only in damaged areas?

As a first approximation: yes. For instance the image below shows the localized detection of H2A.X histones upon damage at the DNA (red: H2A.X staining -> much stronger in treated cells which have high level of damage; blue: DNA staining) 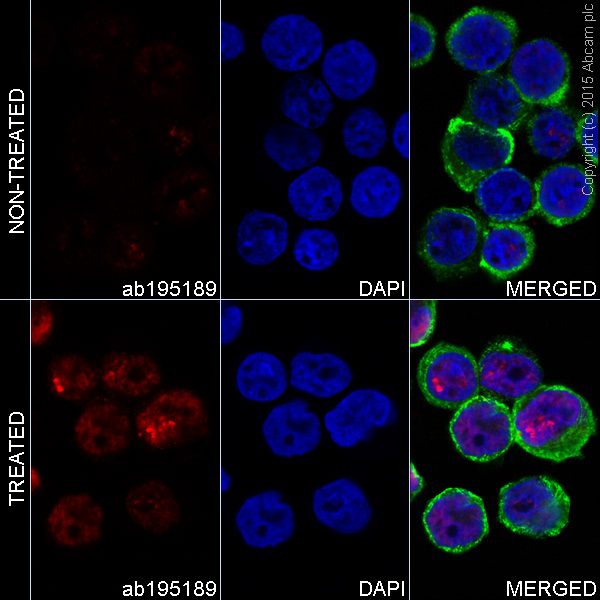 As one approximation this would be true, e.g.: proteostasis (a process whose failure contributes to aging).

that constitute the DNA?

Note that DNA molecules are vastly outnumbered by other molecules in a cell.

DNA is quite static (see above publication), although individual parts could possibly be repaired (see above image on H2A.X);

Also there might be a selective retainment of more "healthy" DNA strands with less mutations (the immortal strand hypothesis).

Just adding my two cents about this particular point:

Others argue that tooth enamel does not regenerate or get replaced. If that is true what makes carbon dating to the year of birth +/- months possible?

Because the principle of carbon dating is not counting atoms being replaced, but measuring the same atom decaying into a different isotope of its element, which is physically totally different. Wikipedia has more info about radioactive decay.

Not the answer you're looking for? Browse other questions tagged neuroscience metabolism dna-damage or ask your own question.

3
Are all body atoms really recycled several times during a life?
2
Are all the atoms in your body replaced with others over a 30 year period?

3
Are all body atoms really recycled several times during a life?
9
What are the lifetimes of cellular components on organelle or molecular level?
2
what is the margarine metabolism in our body?
5
Burning fat transferred from one part of the body to another
1
Why is alcohol purged from the body more slowly when we sleep?
4
Why does our body regulate metabolic processes using the thyroid hormone?
7
What do white blood cells do with FOREIGN white blood cells?