I've been learning about life on coral reefs. Recently I've become aware of the damage to coral reefs caused by tourism and inexperienced divers: 1) Corals have a thin membrane which keeps them healthy. Touching them could break this membrane, causing infection which can lead to death. 2) Stepping on, leaning on, and sitting on coral could smash their polyps.

I am not against being responsible as a diver, respecting nature, arriving and leaving without a trace. I'm just curious what the difference is between human and animal contact. Parrot fish eat coral, taking bites out of it, leaving exposed areas and this damages the coral. I've seen footage of sharks having feeding frenzies on reefs, where they smash into the reef during the commotion and while trying to catch their prey. Fish rub up against coral and peck at them to get algae, and crustaceans walk on the coral with legs that seems like it would break the thin protective membrane on the coral.

Obviously, as humans we technically do not belong in their world, so I'm sure there are reasons for damage with that alone; but why does marine life causing damage not cause actual damage? Or does it, and it just repairs differently or faster somehow?

You are absolutely correct in regards that marine life does cause damage to corals. In particular, parrotfish have been found to play an important role in regulating the biodiversity of coral reefs through their feeding behavior. Certain species of parrotfish feed on certain species of coral, typically faster growing species that branch out into easier access bits of corals that the fish can consume. This has the effect of allowing slower growing species that may also be harder corals to consume (in terms of hardness, shape accessibility, or other factors) to grow and compete in the coral reef and prevent the reef from being overgrown with the faster species. A similar process is seen on the land with grazing herbivores which help propagate biodiversity by consuming certain plant species thereby giving increased chances for other species to grow. These ecosystems and the relationships between corals and species like parrotfish have had an extremely long time to come to shape through evolutionary pressures on both sides of the organisms, consumer and producer.

The problem with divers who cause damage to corals is that it is an introduction of artificial stress and arbitrary damage to the coral reef in a short time without much time to adapt, placing additional stress on the environment which is already stressed. Unlike the parrotfish, divers may not discriminate on what corals they damage. Additionally, areas where inexperienced divers damage coral generally will see more inexperience divers often at the same diving site, so from the standpoint of protecting the coral reef, minimizing the damage caused by divers becomes an important priority to the stewards of those areas and the diving shops which bring divers to those areas.

OTOH, it is indeed true that a coral reef can be overgrazed by animals. An example that readily comes to mind is the infestation of the Great Barrier Reef by the crown-of-thorns, Acanthaster planci: 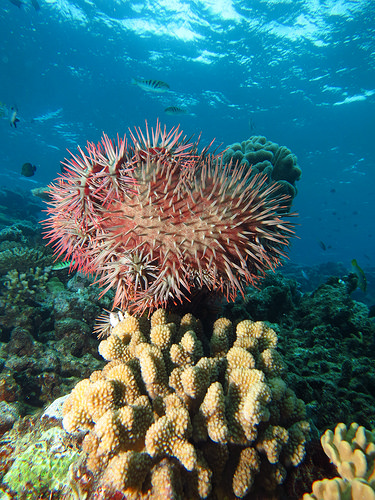 Normally, these starfish help the ecosystem by feeding off fast-growing coral species, thus promoting diversity. However, every so often, there is a boom in the population of these animals, and overgrazing thus occurs.

I think an essential part of this is the fact that there really is nothing particularly special about humans. We are as much a part of the environment as any other animal and produce our own evolutionary pressures (See proliferation of household/farm animal populations vs. almost a total annihilation of large predators).

The problem usually is that we (i.e. humans as a race, but mostly the developed world) don't like the results. We both like the idea of the great cats (albeit from a distance or behind glass/bars) and are afraid that the evolutionary pressures we generate are too large.

From what I understand it is very unlikely that we are able to destroy nature/life on earth, but it is very likely we are able to cause enough devastation that it won't be able to sustain the human race at the very least short term (couple hundred thousand years). This is bad for us and as such we should be mindful about not causing too much evolutionary pressure too fast to keep the planet in the state where it is capable to support us and possible also look really nice.

Not the answer you're looking for? Browse other questions tagged ecology marine-biology or ask your own question.

3
What forms the base of the coral reef ecosystem?