I am not even remotely an expert in this field; I just got curious, so help me.

First of all, let us remove all human sentimental attributes from this question (such as connotations of scientific racism or emotional reactions thereof) and ask it from a purely scientific point of view. The typical facial feature of a West/Central African person (the so-called broad African type) exhibits a wide nose, a lack of nasal bridge projection (similar to many Asian noses) and a prognathous skull shape that resembles more closely to our ancestor Homo Heidelbergensis than many other indigenous phenotypes from other parts of the world do.

I agree that this claim sounds anecdotal, and is certainly not true of all Africans (for example, Ethiopians), but one cannot dismiss it simply on grounds of ethical policing. I cannot help but notice that many of my African friends remind me of our shared ancestry (with no disrespect meant whatsoever), as is clear from the photographs below, one of a supposed Homo Heidelbergensis and one of a random African Homo Sapiens of today. 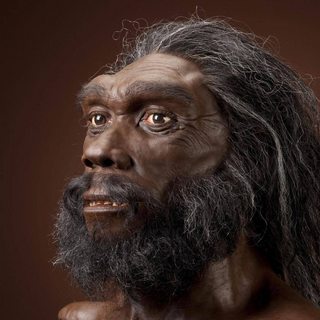 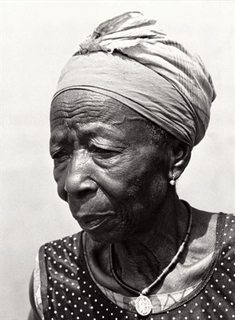 My question is the following. What is the reason behind this seeming resemblance? Is this appearance an illusion and possibly a construct of a prejudiced mind, or does this have a valid scientific answer? For example, are most Africans closer to our ancestors than the rest of humanity is? How does evolution answer this question?

Thank you for your help.

Note that I had never heard of the expression "broad african type" and could not find much reference to this term when googling. But anyway, I'm happy to use it to refer to a particular set of typical facial features.

What is the reason behind this seeming resemblance?

Note that the Homo Heidelbergensis image is not a picture (obviously) and much of what is being depicted was open to artistic interpretation. It is possible that some of the feature you are thinking of are not real. Have a look at the post In reconstructions, how are various shapes of facial features determined from skull only?.

You list several phenotypic traits and it would be too broad of a question if you were expecting an explanation about the evolution of each of these traits. I will just pick one classic trait; the nose.

One of the role of the nose is too even up the temperature of the air that we're inhaling. As such, the shape of the nose is under differential selection pressures depending on the environment. So if the nose of Homo Heidelbergensis looked alike (assuming it really looked like on the facial reconstruction) today's "broad African type", it is probably because of shared environment. Note however that nose shape vary a lot among african lineages and also among non-african lineages. You might want to have a look at this popular article.

A big point of ressemblance is the skin color that you don't talk about. Have a look at the posts Why do we assume that the first humans were dark-skinned? and How did some humans evolve to be white? to learn more about skin color

Is this appearance an illusion and possibly a construct of a prejudiced mind, or does this have a valid scientific answer?

First, see my above point about facial reconstruction.

For example, are most Africans closer to our ancestors than the rest of humanity is?

No, they're not and they cannot be. The MRCA of all humans today is more recent than the MRCA between any human and H. Heidelbergensis. You should have a look at this intro to phylogeny to understand a little bit better how different lineages relate evolutionarily speaking.

Not the answer you're looking for? Browse other questions tagged human-evolution or ask your own question.

2
Many black people I've met have bigger lips than white people, why?
18
Why do we assume that the first humans were dark-skinned?
4
Why do the ancestors of birds still exist?
3
In reconstructions, how are various shapes of facial features determined from skull only?

0
Why did the indigenous peoples of northern Asia and America not evolve the same physical characteristics as people of Nordic ancestry?