What are gram negative and positive bacteria?

@yamad is right on - Gram stain is a major way of categorizing bacteria. Its worth mentioning what the Gram stain color means.

While not failproof, the Gram stain test reflects a major division of the sorts of cells bacteria, helping to type the bacteria of interest

Gram stain reacts with the peptidogycan to create the purple color. The peptidoglycan is a mesh of carbohydrate (sugar) chains with short peptides attached to them that gives the bacterial wall mechanical strength against osmotic changes in the environment (e.g. large concentrations changes in sugars or salts) and mechanical stresses such as shearing from current. 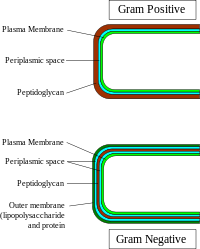 The Gram stain is one of a large number of techniques used to characterize bacteria. In particular, a bacterial species is usually either Gram-positive (purple when stained) or Gram-negative (pink when stained). In Gram-postive bacteria, the cell wall is thicker and has much more peptidoglycan compared to Gram-negative bacteria. The chemicals in the stain react with these molecules in the cell wall and result in the purple color. All of this information is well covered in the Wikipedia article on the subject.

1
What are the differences between G+ and G- bacteria?