Simple diffusion of lipid-soluble molecules through phospholipid bilayer — does anything get “stuck” in transit?

It's a pretty elementary concept, and when I first learned of it I don't think I had the foundations to even think of such a question, but I found myself the other day thinking about the amphipathic nature of the phospholipids in the plasma membrane and why it might be that lipid-soluble molecules don't stay in between the layers (of the bilayer).

I know that simple diffusion is a response to a concentration gradient, but consider a case where equilibrium is being restored and lipid-soluble molecules are diffusing from whatever extracellular matrix through the membrane and into the cytosol. Towards the end of this process, when equilibrium is nearly restored and the last few molecules are making their way into the cell, the rate of diffusion for these last couple molecules will be slower than those that diffused when the concentration difference was greater. Since the polar heads on the outside and inside of the bilayer are hydrophilic but the inner part, where the fatty acid tails are, is hydrophobic, what drives a molecule to leave the cozy, accepting, lipophilic environment of the middle (of the bilayer) to cross through the cytosolic-side rejecting polar heads and enter the cytosol?

I understand that initially these molecules were moving into the cell in response to a difference in intracellular vs extracellular concentration, but I'm asking whether we would ever see a case where the gradient is nearly zero and a molecule in transit simply decides to reside in between the layers instead of crossing all the way into the cell; as if moving through the cytosolic polar head side is not worth the effort to reduce a nearly-zero gradient to zero.

Please ask me if I can clarify my question in any way -- I'm finding it difficult to phrase. I asked my professor (who has her doctorate in toxicology & pharmacology) and she understood what I was asking but didn't have an answer.

I think, given Alan's answer the question you might be asking is something like 'do compounds become concentrated in the lipid bilayer', as opposed to achieving high concentration inside the cell after diffusing through the membrane as he describes.

This could certainly happen (if that's what you're thinking), but usually won't for I think two reasons.

The first is that any molecule that would not soluble in the interior of the cell is going to have a correspondingly small not going to be found in the blood or lymph, tissue, ocean or other milieu the cell is living in, which will be mostly water.

You might well ask whether there are cases where the compounds in question might be available in low concentrations around the cell and over time accumulate in the lipid bilayer. This slow concentration model probably happens, but there is a compensating mechanism - the lipid bilayer is taken into vescicles and degraded, to be replaced by newly synthesized such that membrane components renew themselves. This process includes the cell engulfing by endocytosis and specifically turning over membrane proteins.

The turnover rate for most cells is on the order of days, some of the best numbers for this are behind a paywall, but a reference to synaptic membrane turnover shows some components turn over varying between 6 and 24 days. Different components such as cholesterol, phosphatidylcholine and phosphatidylethanolamine have differing rates of turnover.

So between these two effects, the concentration of 'permeant molecules' would be low for most cases.

I interpret your question to refer to the movement of a lipid-soluble molecule that is therefore able to diffuse into cells down a concentration gradient. I think that you are asking whether as the gradient collapses, some of these molecules would "stay in the bilayer".

You are thinking about the diffusion process in the wrong way. There will always be a pool of these molecules in the bilayer, and these will be continually exchanging with molecules in the two aqueous phases on either side of the membrane. The net flux which results in diffusion in any particular direction will be the movement that results from these equilibria. Diffusion isn't a directed process in the way you define your question. 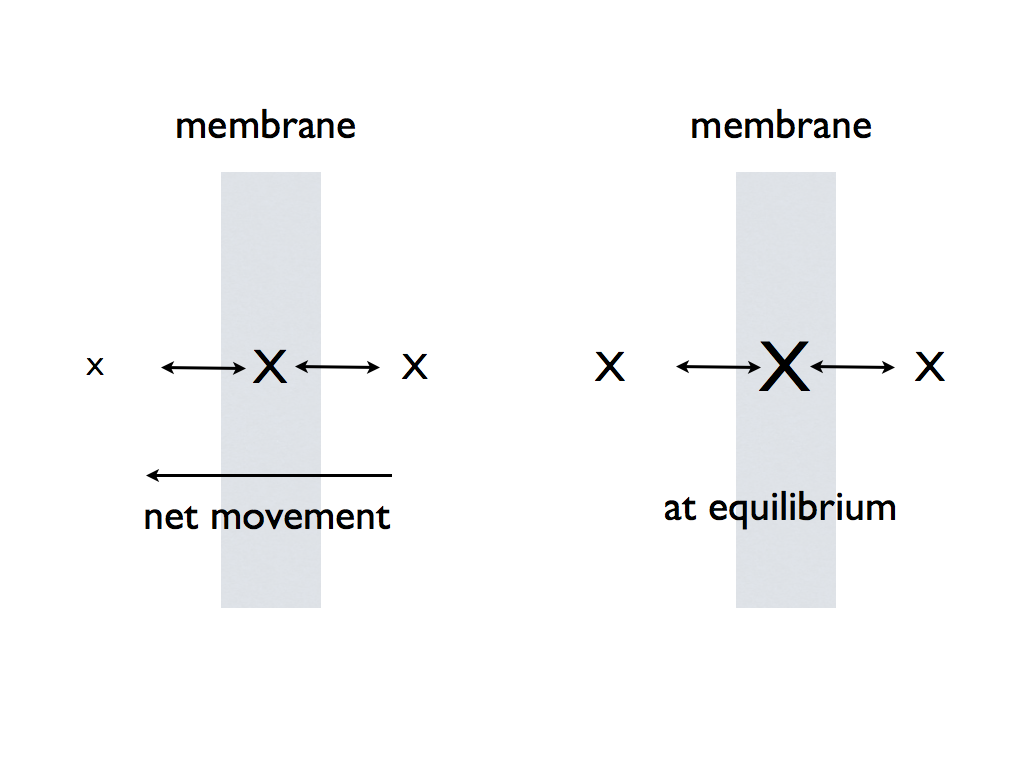 My diagram shows on the left the progress towards equilibrium and on the right the situation where it has been reached. Note that at equilibrium, because it is lipid soluble, the molecule is at a higher concentration (larger typeface) than it is in either aqueous phase. And - importantly, molecules will still be moving into and out of the bilayer at both faces.

Added later: A classic example of a lipid soluble molecule able to diffuse in this way is oxygen. According to this paper, at physiological temperatures, and at equilibrium, the concentration of oxygen in a bilayer will be approximately 3x that in the surrounding fluids.

Not the answer you're looking for? Browse other questions tagged biochemistry cell-biology cell-membrane or ask your own question.