How selfish is Dictyostelium slug formation?

Dictyostelium is a slime mold which is well known for having a single cell free living phase and other some conditions (e.g. when food is scarce) for forming communal piles of cells called 'slugs' which migrate as a proto animal. Eventually the slug can turn into a fruiting body with a stem and a nodule of spore forming cells at the top. The spores can then be carried off by the air and seed dicty further away.

Apart from being amazed at the seeming ability to form amoebic, animal, plant and seed like forms, there must be a lot decision making happening at the formation of the stalk and fruiting node at the top.

So my question is: what is the current thought about how cells compete in the mexican hat and stalk formation to be at the top of the pile? Its pretty altruistic of the cells in the stalk to do this - some web pages say they die, is that right? Links to references after 2007 or so would be appreciated unless it's all been decided.

By analogy its always been pretty altruistic of 99% of our bodies to let our gonads reproduce, but we are (approximately) homogeneous genetically. In the wild is slug formation heterogeneous? How does genetic diversity influence slug and fruiting body formation? 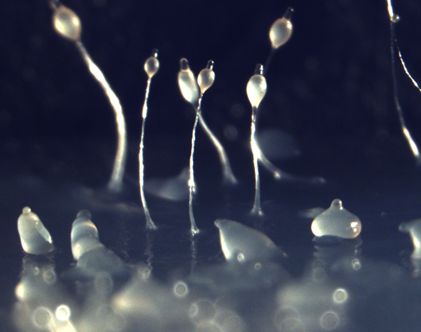 Joan Strassman's work is probably the route to go for this.

The short of your answer is that several things mediate who ends up where in the slug:

Here's the most relevant paper:

Not the answer you're looking for? Browse other questions tagged reproduction evolutionary-game-theory selection altruism or ask your own question.

6
How can sex ratios remain Fisherian (1:1) in species where only the dominant male gets to mate
6
How to calculate relatedness in haplodiploid organisms (mainly full sisters and full brothers)?
8
How does a sperm cell die?
10
Sperm formation - Frequent Ejaculations
0
How is sexual selection evolutionarily stable?
2
Multiple fission and spore formation