Is olfactory input processed by the thalamus?

Is olfactory input processed by the thalamus? I know olfaction is the only sense that can bypass the thalamus, but are there cases where the input can project to the thalamus?

Now it becomes interesting - third-order neurons in aforementioned regions send projections to the dorsomedial nucleus of the thalamus, the basal forebrain, and the limbic system.

The thalamic connections are thought to mediate conscious perception of odor perception. The amygdala and the entorhinal area are neural components of the limbic system and may be involved in the affective and aversive components of olfaction. 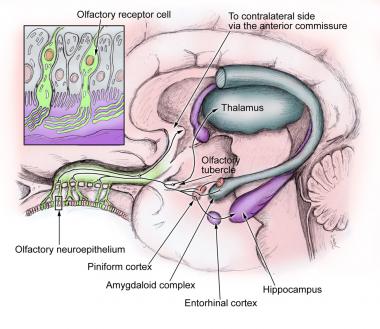 Not the answer you're looking for? Browse other questions tagged human-biology neuroscience neurophysiology neuroanatomy olfaction or ask your own question.

3
Spinal cord injury bypass
5
Where do the 31 spinal nerves start/meet?
3
Neurons with thousands of connections: where are the extra connections coming from?
7
Why do fishes have both a gustatory and an olfactory system?
2
Why does olfactory sensation need lateral inhibition?
0
Do human women smell different before they enter labour?
1
Why are there exactly 207 morpho-electrical types of neurons?
0
What neurons' projections comprise the olfactory nerve (Cranial Nerve 1)?