Is lysergic acid diethylamide (LSD) metabolized in the body?

Is LSD broken down into other compounds by enzymes or hormones? If so, at what point and where in the body does this happen? I researched several papers appearing in a google search, but unfortunately I did not understand most of it.

Short answer
LSD appears to be enzymatically broken down in the liver.

Background
First off, hormones do not break down anything; enzymes are the work horses that mediate metabolism.

According to a review paper (Passie et al., 2008), humans metabolize LSD into structurally similar metabolites (Fig. 1) by NADH-dependent microsomal liver enzymes to the inactive 2-oxy-LSD and 2-oxo-3-hydroxy LSD. LAE is formed through enzymatic N-dealkylation of the diethylamide radical at side chain position 8. Di-hydroxy-LSD and nor-LSD are also metabolites, as well as 2-oxo-LSD, 13- and 14-hydroxy-LSD as glucoronides, lysergic acid ethyl-2-hydroxyethylamide (LEO), and trioxylated LSD.

Note that the monoamine oxidase (MAO) system is unlikely to break down LSD. MAO are enzymes that catalyze the oxidation of monoamines. Monoamine neurotransmitters contain one amino group that is connected to an aromatic ring by a two-carbon chain (such as -CH2-CH2-). This structure is not present in LSD (fig. 1). A cursory Google Scholar search did not yield any relevant hits ('LSD' + 'monoamine oxidase'), loosely indicating that MAO is unlikely to be involved in LSD metabolism. However, as I suspect some self-help here - I am unsure about MAOI and LSD interactions, and I highly discourage any toying around with MAO inhibitors and any drug in general. For example, 5-HT is a typical example of an MAO substrate and LSD impinges on 5-HT2A receptors. Hence, interactions in pharmacodynamics with combined LSD and MAOI intake are likely to occur. 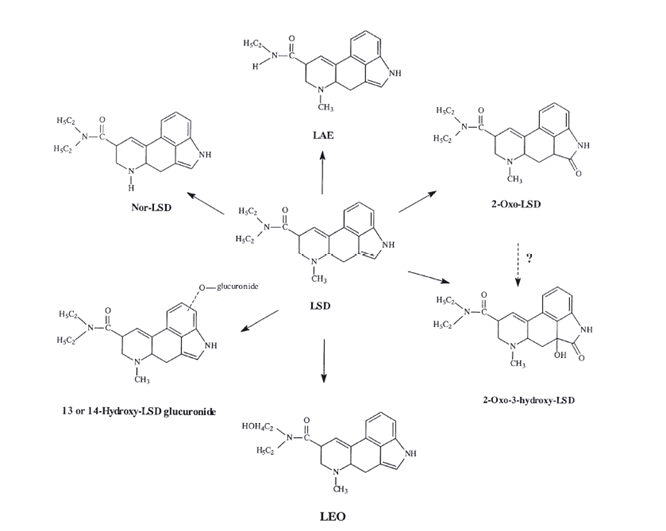 LSD is metabolized in the liver in humans by enzymes of the Cytochrome P450 hemoprotein. The specific enzymes are CYP3A4 and CYP2D6.

CYP2D6 is generally regarded as non-inducible (meaning there appears to be no way to boost its production in humans), and can only be inhibited by other drugs that would cost more than LSD and be dangerous to take anyway.

CYP3A4 carries the answer you are looking for. It is strongly inhibited by... grapefruit! Pomegranate also has the same effect. So ingesting a lot of these fruits will make the LSD take longer to metabolize.

Not the answer you're looking for? Browse other questions tagged metabolism pharmacokinetics or ask your own question.

3
Circulation through the liver in light of drug metabolism
5
How are non-glucose sugars metabolized in the body?
1
How do macromolecules (large drugs) in the eye reach the bloodstream and what are the relative significances of these pathways?
2
Does Glycolysis produce lactate, or pyruvate?
1
How could this molecule affect the body? (Lysergic acid derivative)
3
Specific Neurons that Require Glucose
1
When consuming carbohydrates and fats together, why are the fats caloric?
2
Does LSD "stay" in your fat storage and then "returns" back?
4
Why is fructolysis independent of glycolysis?