Was iron important for the first life on Earth?

Some ions or compounds are thought not to have become involved or important in the metabolism of living organisms until some time after certain mutations took place. For instance, early life is thought to selectively allow calcium ions through its membrane, but eventually also evolved the ability to selectively allow sodium ions, specifically through a mutation that lead to a change in the composition of a channel protein from glutamine to lysine.

Currently, iron is involved in oxidations involving molecular oxygen, such as in cytochromes and clearly holds a key role in modern life, despite that free iron or even ferric compounds are rarely accessible. From my understanding, iron most likely became incorporated into the metabolism of microbes after during/after aerobic organisms had developed, but this does not rule out the possibility that iron was involved earlier on. So, I am wondering if iron was involved in early life, and details on how would be appreciated.

Cyanobacteria require iron for photosynthesis and can be found as fossil stromatolites dating back to 3.5 billion years ago. Stromatolites are layered structures made up of cyanobacteria and sediment. 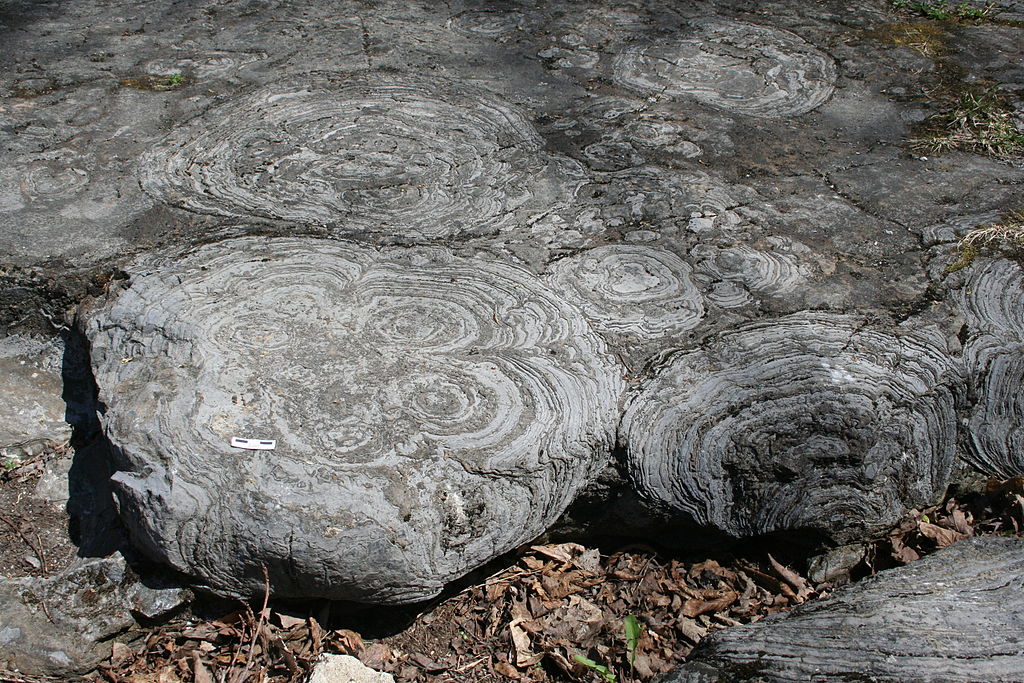 Modern stromatolites can be found at Shark Bay in Australia, Chetumal Bay in Belize, and Laguna Bacalar in the Yucatan Peninsula.

Cyanobacteria are also believed to have evolved into the first microbes to produce oxygen by photosynthesis, which was a catalyst for the Great Oxygenation Event which occurred around 2.45 billion years ago.

It has been proposed that iron was indeed important for the first life on earth, specifically in combination with sulphur. This is because conditions are thought to have existed in volcanic hydrothermal vents that would have allowed formation of iron–sulphur complexes which perform oxido-reduction reactions in modern proteins (as well as more sophisticated functions). Some system for oxido-reduction of chemical compounds is required for life to develop, and the inorganic simplicity of Fe–S clusters, together with their ability to interact with the backbone of proteins, argues for their early involvement, rather than the chemically more elaborate NAD and FAD.

One theory suggests that life originated volcanic hydrothermal conditions in which the oxidation of iron minerals by hydrogen sulphide would have been possible. It has even been suggested that life originated on the surface of iron sulphides (the ‘Iron–sulphur world hypothesis’), although this answer is more modest in its scope.

Modern proteins contain a range of iron-sulphur clusters of varying complexity, but it has been argued in a review in Science by Rees and Howard that the simplest of these — the 2Fe:2S cluster in, e.g. ferredoxin — could have evolved in the conditions mentioned above.

[Different FeS clusters. Note that the external yellow sulphur atoms are from cysteine side-chains of the protein. (Adapted from a review by Johnson et al. (2005))]

Interaction of Iron–Sulphur Clusters with Proteins

In some iron-containing proteins, like cytochrome c, the iron is held in place by a sophisticated organic molecule (haem) and interacts with amino acid side-chains. However in simple iron–sulphur clusters interaction with the NH groups of the protein backbone (in special conformations — ‘nests’ and ‘crowns’) can occur. Thus initially they could have been acquired by simpler proteins, which some believe to have preceded the development of those with the side-chains to provide more sophisticated interaction.

[Interaction of FeS clusters with protein backbone NH groups (blue): A. ‘nest’, B. ‘crown’ with the N atoms in space-filling mode.]

The intellectual appeal of Fe–S cofactors as being evolutionarily most ancient can be seen if one compares them with the structures of other contemporary redox cofactors (images taken from Berg et al.):

It has been argued that the adenine and ribose moieties of these cofactors attest to an ancient origin — in the supposed RNA world — an idea that I, personally, find appealing. Nevertheless, their emergence would require a mechanism for the synthesis of their functional organic components — nicotinamide and flavin, respectively. In contrast, Fe–S clusters come ‘ready made’.

Iron sulphur clusters are also found in the nitrogenase protein, which converts nitrogen gas to ammonia. This must be a very ancient protein, but its greater complexity (the cluster includes molybdenum) suggests it may have arisen later. Another elaboration is proteins, such as aconitase, that have Fe–S clusters linked by more complex organic groups.

As mentioned by @Kurt, iron is a component of photosystem II in contemporary cyanobacteria. However photosystem II is extremely complex and the precise chemical basis of the non-haem iron requirement is currently unclear. Although perhaps necessary if cyanobacterial photosynthesis were responsible for the great oxygenation, this complexity would suggest a relatively late emergence in the pre-aerobic era.

Not the answer you're looking for? Browse other questions tagged evolution biochemistry life-history or ask your own question.

2
Is the missing "life-ingredient" in today's Earth's existence the reason why we cannot recreate life?
5
Who was the first to talk about evolvability?
11
How did the first life form on Earth reproduce without DNA?
2
First life forms to evolve controlled flight
2
When life first formed in earth's ocean, was it salty yet?