Is there an "Adam and Eve" for each new trait during (not just human) evolution? [duplicate]

Do new beneficial mutation evolve simultaneously and independently with several individuals of the same specie or only with one specimen who then transfers it to all of the specie?

In other words, when we talks about common ancestor we usually mean a specie, so for example, all earth dwelling reptiles, birds and mammals are the descendants of Tiktaalik (to the best of my knowledge), and we know that Tiktaalik was the first (or one of the first) species to come to land, but was there a first individual Tiktaalik who went to the land, like Tim Minchin's Tony the fish.

Imagine being the first dude ever to have feet...

Imagine you're a fish, and you are swimming in the ocean ... and suddenly out of nowhere Tony just goes "I'm getting out, I'm freezing, I'm just gonna pop out for a bit, maybe lie on my towel, I'll bring you an ice cream"

-"Don't bother ,Tony, you are a freak! Tony is a freak, let's go, let's ostracize him for being different"

It seems to me that from the same species of ancestors there are several descending distinct species, so it seems to me that that that there was a species of reptiles that at some point some individual of that group developed Dinosaur features and traits and whose descendants became Dinosaurs and then Birds, and another individual of that specie or a descending specie (not necessarily at the same time) developed mammary glands whose descendants became mammals, and other individuals who didn't mate with those two whose descendants remained reptiles.

Was there ever a first dinosaur with feathers who is the father or mother of all birds, or the first fish with lungs, the first monkey with opposable thumbs from whom all apes descend, or the first mammal that decided to go for a swim and all dolphins, whale and seals are his direct descendant of that first swimming mammal?

*- If there are gross inaccuracies and/or over-simplification in my understanding of the evolutionary process, this is because I'm not a biologist, and I would accept happily any correction.

For most traits, there is no clear line where the trait is present or not. Exceptions are traits that occur with a single mutation, like lactose tolerance. So to pick one example, you had a population of fish that had a lung-like organ, and that by genetic drift that organ got more lung-like in a sub-population. So for most traits, you have a combination of mutations that lead to the traits, and these mutations need not occur in a direct line of ancestors. (I.e., a descendant will combine independent mutations from its parents.)

So there is no "Adam and Eve" in the sense that these are the only ancestors of all living individuals of a species. This would be a terrible genetic bottleneck! See this illustration, which comes with the estimate that the population size of the chimp-human ancestor was around 100,000. 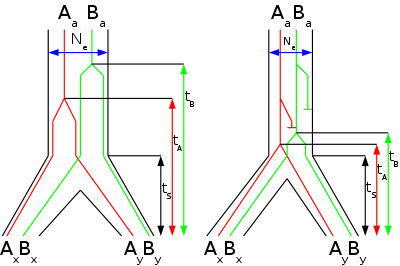 You ask for "a first dinosaur with feathers who is the father or mother of all birds". It's possible that feathers arose multiple times from the same feather-like structures, or only once. But it is clear that this first dinosaur is only one of many dinosaurs that lived at the same time, and who are also ancestors of all birds.

29
Human evolution: Where *exactly* did the first human come from, whose parents were not?
2
Evolution after the development of sexual reproduction

4
Did baby bird hair and mammalian hair convergently evolve?
7
Is it a coincidence that the sensory systems for smell, vision, taste, and hearing are all near each other in the head?
4
Evolution of dinosaurs
16
Do all living humans literally descend from one ape?
3
What Evidence Do We Have For the First Mammal?
1
What ecological niche do disk shaped fish exploit?
5
Were there any vertebrates with 6 or more limbs?
5
Why did we lose our fourth type of cone cell (in the eye)?
2
Which fish did modern tetrapods descend from?