If you use a vacuum chamber to reduce the pressure of water such that it can boil at around room temperature will it still have the same effect on reducing harmful bacteria as boiling at the usual 100C?

No, you do need to reach high temperates to kill the bacteria.

It's not about the evaporation, or the pressure that kills bacteria, rather it is the temperature that does. Higher temperatures have drastic effects on the molecular structures that occur within the bacteria, such as the denaturing of various proteins present inside the cell. As a result, if you wish to boil water to kill it, it must be done at an elevated temperature.

Wikipedia mentions that the optimum temperature for killing microbes is around 70°C,

Boiling water is used as a method of making it potable by killing microbes that may be present. The sensitivity of different micro-organisms to heat varies, but if water is held at 70°C (158°F) for ten minutes, many organisms are killed, but some are more resistant to heat and require one minute at the boiling point of water.

TLDR: No, as its not the "boiling" itself that kills the bacteria, its the effect of temperature on proteins. But maybe?, in that you can kill bacteria by changing pressure without changing temperature.

Effect of Boiling at a Constant Temperature (No)

As other answers have suggested, the aim of boiling water to kill bacteria is to denature (i.e. change the shape) of proteins in the bacteria such that the proteins required for life stop working. The other facets of the boiling (e.g. water evaporation, turbulent bubbling, etc.) are unlikely to kill the bacteria. So if we had some bacteria in water and mimicked all the qualities of boiling except for temperature change, I doubt we'd see the bacteria die. This sounds like quite an interesting experiment to try though!

There are many ways to denature a protein other than high temperatures! You suggest that we could change the pressure of the environment, which might also denature the proteins and kill the bacteria. In fact killing bacteria with high pressures (~340 MPa) is called Pascalization. As per your suggestion of lowering the pressure, there are some bacteria that can survive in a vacuum (BBC, 2010) so you might only be able to kill the bacteria by raising the pressure. On the other hand, it is known that you can denature a protein with low pressure (Wiedersich, 2008) but whether this protein denaturing would actually be fatal to the bacteria is another question. The effect of low pressures may be species dependent.

Lastly, consider the phase diagram of water below (from Wikipedia). Where on the diagram can bacteria survive? Most (non-extremophile) bacteria seem to be bounded from above by around 340 MPa, and bounded on the right by around 72°C, but where else are they bounded? Furthermore what is the maximum pressure at which bacteria can survive in boiling water? 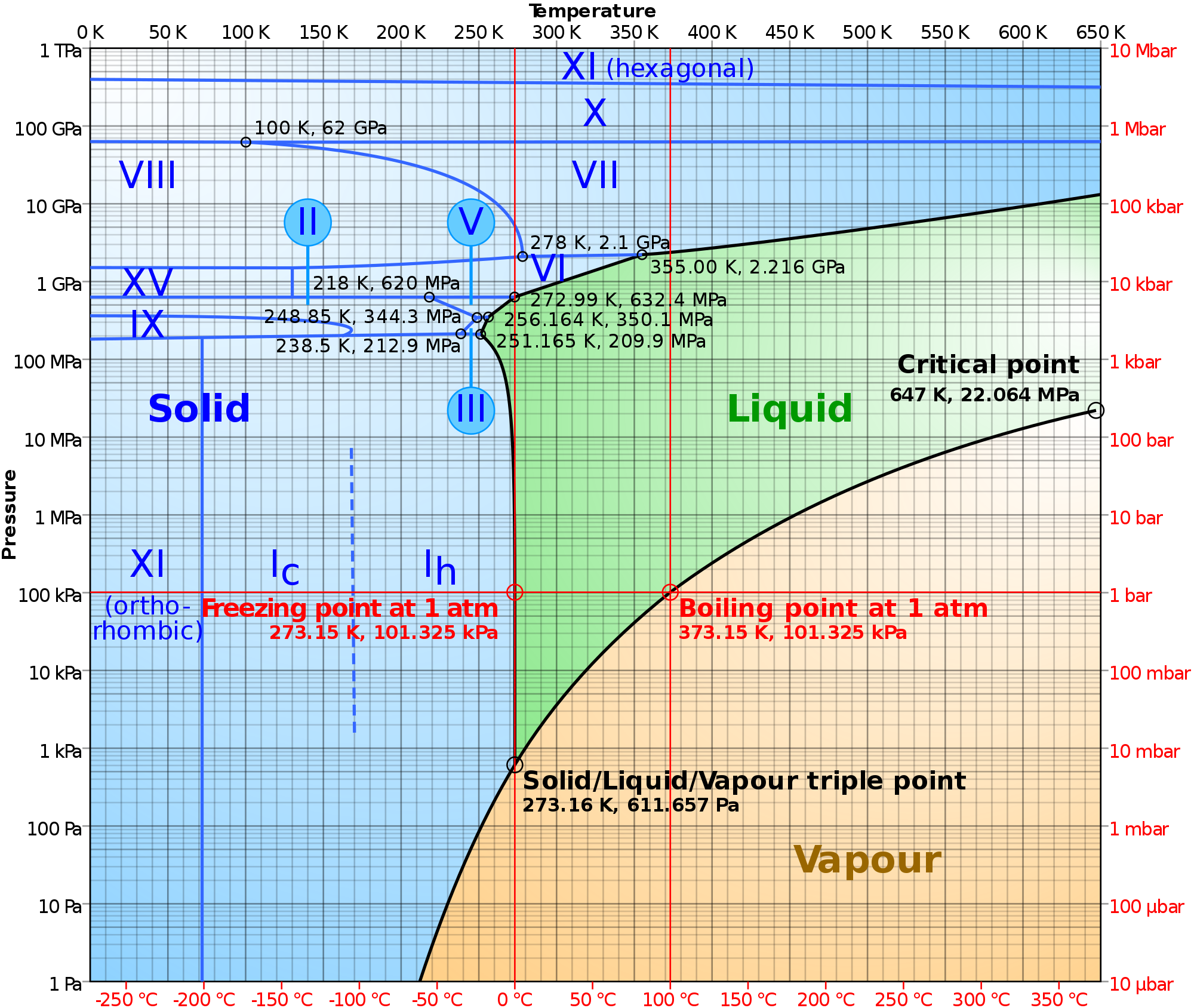 20
How does isopropyl alcohol disinfect less in higher concentration?
4
Are aquatic filter feeders effective at cleaning water to a safe level?
8
Rust on kettle dangerous to consume?
3
Do sulfate reducing bacteria ingest their sulfate as solid, or as dissolved in water?
6
Can I kill bacteria with distilled water?
0
Can you design a bacteriophage that attacks the part of the bacteria that makes them antibiotics resistant?
3
Why does vacuum sealing of foods prevent spoilage from anaerobic bacteria?
39
Can bacteria be killed by purely physical trauma?
12
Will proper autoclave treatment really "inactivate all resistant bacterial spores"? If not, how widespread are autoclave-resistant bacterial spores?