I've just read an article Rab10 GTPase regulates ER dynamics and morphology - Nature Cell Biology 15, 169–178 (2013) doi:10.1038/ncb2647. In this paper, to identify Rab proteins in ER, first they isolated ER vesicles. Then washed them to remove cytosolic proteins. After washing, these vesicles were solubilized by detergent. Then, it was loaded on to a GTP-agarose column (to bind GTP binding proteins to the column). In the last step GTP binding proteins were eluted with GTP and analysed by SDS-PAGE.

This is the figure the question is about. On the right is the control experiment with GTP-γS, on the left without it: 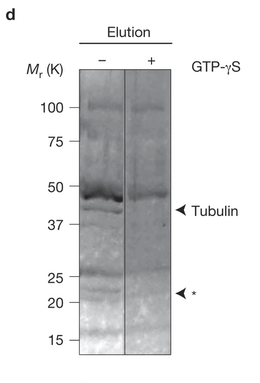 The bands that are visible in both experiments are unspecific binding. If GTP-γS doesn't affect their presence, the mechanism by which they bind to the column can't be specific to the GTPase functionality.

The general idea behind this control experiment is to distinguish specific binding from unspecific binding to the column. Being able to do that means that the authors had fewer proteins they needed to investigate further, saving them some work.

Not the answer you're looking for? Browse other questions tagged cell-biology gel-electrophoresis eukaryotic-cells protein-binding sds-page or ask your own question.

5
How does ubiquitin recognize misfolded proteins?
9
How many RNA-binding proteins can simultaneously bind on a single mRNA?
0
Does denaturing proteins lead to loss of epitopes?
7
For Penicillin Binding Proteins, why is the enzyme-peptide complex less stable than the enzyme-β-lactam complex?
5
Does cocaine bind competitively or non competitively to DAT?
2
Do all transmembrane proteins contain channels or tunnels?
2
How does the body detect irreversible binding to receptors?
1
Why does the structure for cellular retinol binding protein show interactions with cadmium ions?