Why do some reflex actions involve interneurons, but some don't?

The "knee jerk" reflex is a stretch reflex, as @John's answer indicates. It is unfortunately named the "knee jerk" for the response observed in the corner case where rapid, short extension of the leg at the knee is elicited by tapping the patellar tendon with a percussion hammer during a physical exam. Despite being named for this specific phenomenon, this reflex contributes to setting resting muscle tone, controlling the response to a load, and coordinating synergist and antagonist actions. You can read about this in some detail in Kandel's Principles of Neural Science, Chapter 36.

The sensory portion of this reflex involves a proprioceptive sensory organ called a muscle spindle that detects the stretch of a skeletal muscle. All human (and most mammalian) skeletal muscles have these sensory organs, so this is not specific to the quadriceps at the knee. Several are tested in a similar way to the quadriceps as part of a neurological exam (see Brust, Practice of Neural Science, Chapter 6), but, as is the case with most reflexes, they are more complex than is taught in introductory biology. This sensory organ is continuously active, sending information to the cortex, the cerebellum, synergist and antagonist muscles, as well as back to the muscle in which the organ itself is found (again, see Kandel).

Answers about "why" a physiologic system is set up in a particular way are generally speculative, but stretch reflexes in muscle are definitely different from other reflexes. Unlike, for example, the withdrawal reflex, the sensory organ (the muscle spindle) is actually part of the effector (the muscle), and provides continuous feedback to the effector, controlling its primary function (contraction/production of tension). Additionally, the processing and sensitization/desensitization that an interneuron might provide in a different reflex arc are provided by innervation and control of the spindle itself by $\gamma$-motonuerones, among others.

There are additional reflex arcs with the same sensory part that involve processing and inhibition/excitation by interneurons. But in these cases the outflow is to a separate effector (antagonist muscles). See the figure below from Brust, Chapter 6. 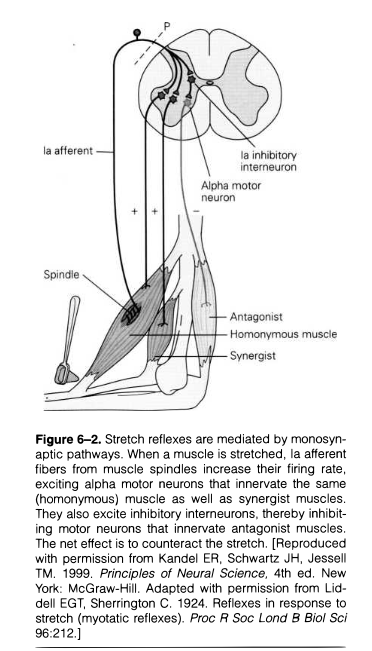 I did not realize it but the knee jerk reflex is a stretch reflex and thus only involves two neurons (monosynaptic). Many many more reflexes use 3 or more neurons (polysynaptic) so include interneurons.

monosynaptic are common for muscle stretch limiting reflexes, that is why I knew them by their more common name stretch reflexes and did not make the connection. They don't involve interneurons becasue they would offer little benefit, they are self regulating most of the time and only involve a single source and a single destination and will not see much benefit from modification of the signal.

This slideshare on reflexes can provide some detailed information and a place to keep researching from.

Not the answer you're looking for? Browse other questions tagged neuroscience neurophysiology reflexes or ask your own question.

4
Does body mass have a bearing on reflex speed?
0
Systemic sensory confusion?
7
How are reflexes suppressed?
2
Why we shiver/tremble/shake while performing some work which requires high accuracy?
2
How a nerve impulse reaches the correct destination?
3
Why summation takes place at Initial segment?
2
What is a CAG::ChR2 rat?
0
Is grip force a reflex?