How is it known that Homo sapiens and Homo neanderthalensis interbred?

Many recent articles maintain that a small percentages of Neanderthal genes (up to 2%) are found in modern non-African people. (I believe that currently there is insufficient genetic material from older hominids, such as H. erectus, to decode a genome).

My question is: how is it known the “Neanderthal genes” found in modern humans got there by way of interbreeding? What distinguishes those genes from genes that both species inherited from a common ancestor? After all, Neanderthals and H. Sapiens are over 99% genetically identical. How is it determined that gene A is found in both because it was from H. erectus, from which both evolved; but gene B was not already present in H. sapiens, so it must have arisen through interbreeding?

Although this question makes some false assumptions, it is fundamentally interesting as the methodology used is neither simple or easy to understand. It is not my area, but I have found it especially interesting to read the long 2010 Science paper by Green et al.. One really needs to read it for oneself (it is free view), but it is not a trivial undertaking.

False assumptions / misconceptions in the question

The main misconception in the question are:

Let me start by addressing the question “What distinguishes those genes (purported to have been acquired by H. sapiens from Neanderthals) from genes that both species inherited from a common ancestor?”. The answer relates to the absence of such genes from modern humans of African origin, and the fact that we know the general evolutionary relationship between neanderthals and modern humans (African and non-African) from a wealth of non-sequence paleontological evidence. This is shown in the diagram below, modified from a recent and recommended review by Nielsen et al. in Nature (2017). 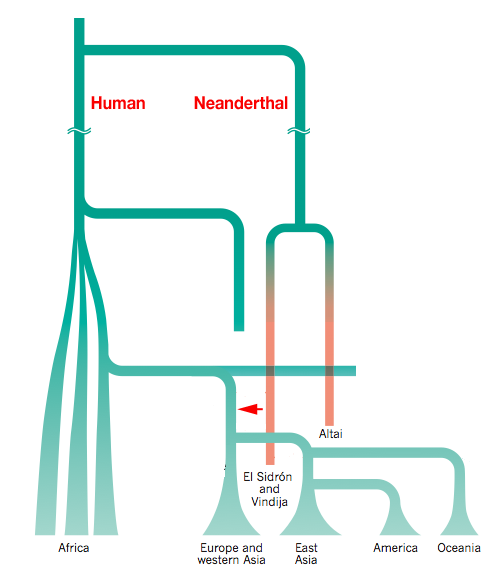 Clearly any gene present in the common ancestor to humans and Neanderthals should be present in both African and European populations, unless it had been lost from the African population.

So if the analysis is not done by detecting gain/loss of individual genes, how is it done? Certainly not by overall percentage sequence similarity, because of the high overall similarity and the population variation. It is done by studying SNPs — single nucleotide polymorphisms — in particular genes.

For example, consider a gene that has only a single haplotype in Neanderthals, and originally had a single but different haplotype in humans. (This might determine something like eye colour, although this is not an actual example.) If the other haplotype were acquired by humans as a result of interbreeding, then the modern human population would contain both alleles. When you compared the relationship of the SNPs for this gene between different humans and between humans and Neanderthals you would find different results from those for a gene the variant of which had not been acquired by interbreeding. The acquired gene in humans would be more related to that in Neanderthals than non-acquired genes, but less related to that in other humans (because of its more recent appearance in the population and time for homogenization, I believe).

The African/non-African aspect is explained in the Science paper cited in my introduction, but there is a good visual diagram in a 2014 Nature paper by Sankararaman et al., the manuscript of which can be viewed freely in PMC through the US HHS.

These papers contain a wide range of controls, including comparisons of different non-African population groups, and detailed discussion of alternative possibilities.

A final point of interest is that Sankararaman et al. examined some of the genes in which these SNPS suggest Neanderthal origin. They write:

“…genes involved in keratin filament formation and some other biological pathways are significantly enriched in Neanderthal ancestry in European populations, east-Asian populations, or both …. Thus, Neanderthal alleles that affect skin and hair may have helped modern humans to adapt to non-African environments.”

It would be scientifically dishonest not to mention some oddities. One is that the Green et al. paper suggested that gene flow had been uni-directional: from Neanderthals to humans, which is apparently unusual in interbreeding. However a more recent study (Kuhlwilm et al., 2016) shows some human gene flow into Eastern Neanderthals, although not into European Neanderthals. (Thanks to @iayork for pointing this out.). The other is that modern Asians appear to have more Neanderthal DNA than modern Europeans. (This is discussed in the paper already mentioned by Green et al.)

12
Have any mutations or genetic loci been associated with exceptional longevity in humans?
7
How many, and how severe, are known single gene polymorphisms for obesity?
3
What is the difference between a human being, a Homo sapiens, and a Neanderthal?
2
Is there a measure of human genetic variation, where human genetic variation can differ more than 1%?