What is the direction of the processing of light by the (human) retina and how does it happen?

Quoting Textbook of Medical Physiology by Guyton and Hall, 2016, page 647,

...the functional components of the retina, which are arranged in layers from the outside to the inside as follows:

After light passes through the lens system of the eye and then through the vitreous humor, it enters the retina from the inside of the eye (see Figure 51-1); that is, it passes first through the ganglion cells and then through the plexiform and nuclear layers before it finally reaches the layer of rods and cones located all the way on the outer edge of the retina. This distance is a thickness of several hundred micrometers; visual acuity is decreased by this passage through such nonhomogeneous tissue. However, in the central foveal region of the retina, as discussed subsequently, the inside layers are pulled aside to decrease this loss of acuity.

I have attached Figure 51-1 for people who would like to see it.

My questions are: How does light travel to the inner parts of the retina first even when there are so many impeding layers preceding it? Why does it not stimulate the photoreceptors first? What is the pathway of the light after it travels to the the innermost retinal layer? Are the photoreceptors the first to be stimulated by the light? 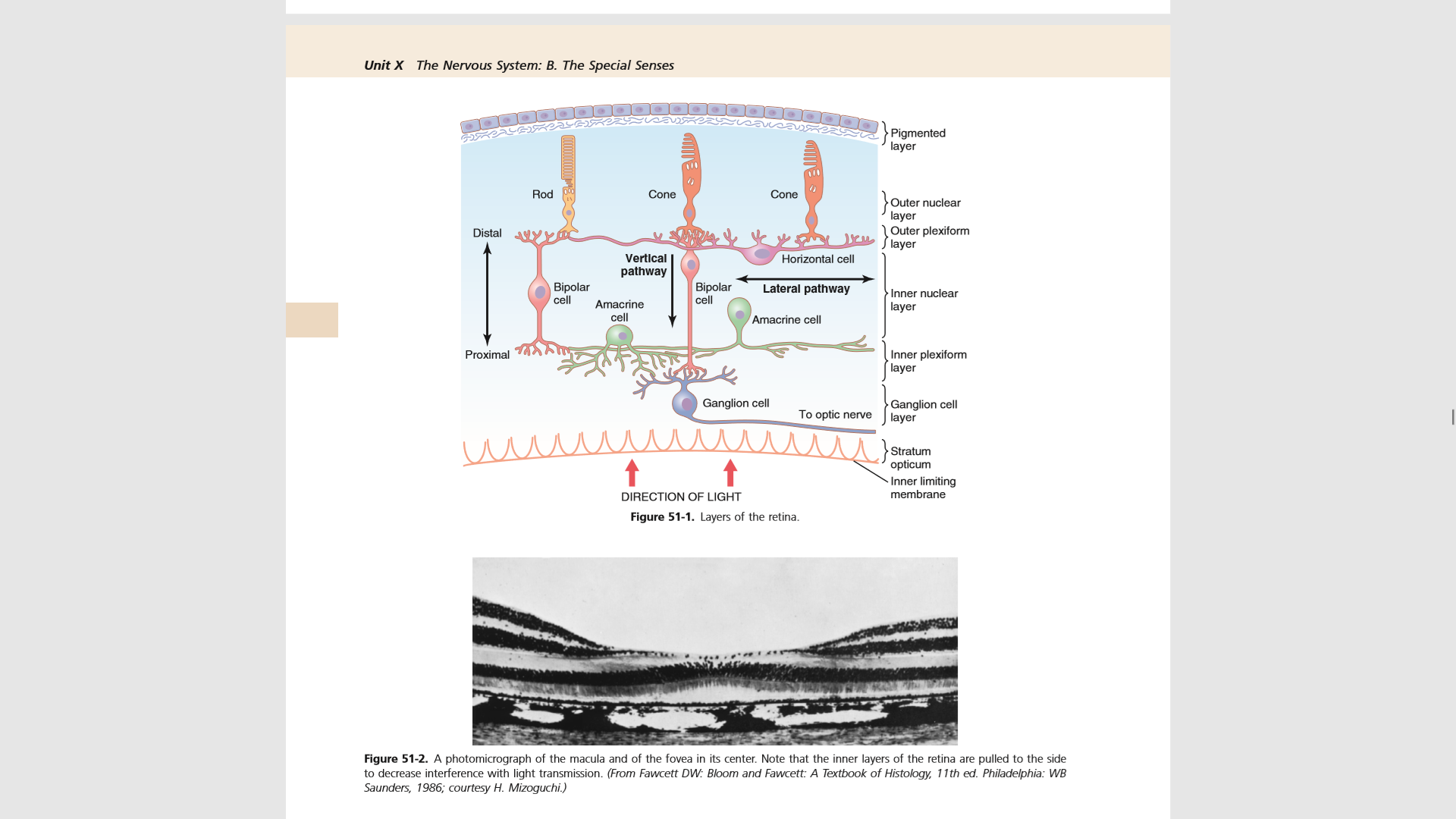 As can be understood, I am quite confused, so if the framing of any question is reflective of erroneous understanding, kindly let me know. All help appreciated.

The retina is fairly thin, and the bipolar/RGC layers don't contain much pigment. Have you ever looked at a thin slice of tissue under a microscope? You can do this and focus to different layers because single layers of cells are fairly translucent (remember they contain a lot of water): most light passes right through them. Some cells, such as red blood cells or photosynthetic plant cells, are harder to see through, but that's only because they are full of pigments.

The reason the photoreceptors respond to light in a way that can be detected biologically is that they contain special photosensitive pigments. In rods, this pigment is called rhodopsin and it is composed of a protein and a molecule of retinal. Most other cells in the retina don't have any such photoreceptors (there is a special class of retinal ganglion cells that is an exception, see for example here - these cells have a pigment melanopsin and contribute to light detection for circadian rhythms rather than vision).

Other cells in the retina respond to light only because they are sensitive to neurotransmitters released by photoreceptor cells and other retinal cells.

As far as why this is the arrangement, with photoreceptors in the back, it's really just a fluke of evolution and evidence that evolution and not design is the best explanation for diversity in biology. Eyes have evolved more than once in animals, however, and cephalopods like squid do not have their retinas arranged this way; in squid the photoreceptors are the most superficial layer.

Because the retina is so thin, this arrangement doesn't provide a large enough disadvantage to be selected against given the complexity in changing the organization. One exception to the thinness, however, is in the blind spot. The blind spot exists because all of the axons from the retinal ganglion cells have to exit the retina someplace. They exit in a big bundle, and there can't be any photoreceptors where that bundle is, so there is a spot where you cannot see. However, the position of the spot is not in the center of your vision, and that part of the visual field is usually covered by the other eye

The Müller cells act as light guides that differentiate among wavelengths of light and make sure that both rods and cones receive their optimum wavelengths without much loss. Since Müller cells span the whole thickness of the retina from the retinal ganglion cells (RGCs) to the the beginning of the photoreceptors, they act as optical fibres allowing the light to pass unhindered through the rest of the retina to the photoreceptors.

Not the answer you're looking for? Browse other questions tagged eyes sensation senses or ask your own question.

4
The arrangement of retinal cells?
2
Can the retina emit light?
8
What is the smallest difference in light wavelength that the human eye can detect?
1
What is the mass of a human retina?
5
How much light can pass through the human eyelid?
3
What role does the eardrum and ossicles play in hearing, versus cilia?
24
Why do blood vessels in the eye not obstruct vision?