What would be the fate of protein made from D-amino acids after ingestion by humans?

If such proteins were ingested by individuals, how would they be metabolized and what consequences would they have?

One aspect of the basic biochemistry needed to approach this question is the fact that the enzymes that catalyse cellular reactions show various levels of specificity towards their substrates (reactants), including stereo-specificity. This is illustrated below (an ill-favoured thing, but mine own). The first example shows that the specificity of proteases may depend on the general chemical or physical nature of the substrate. The second shows the how stereospecificity works. 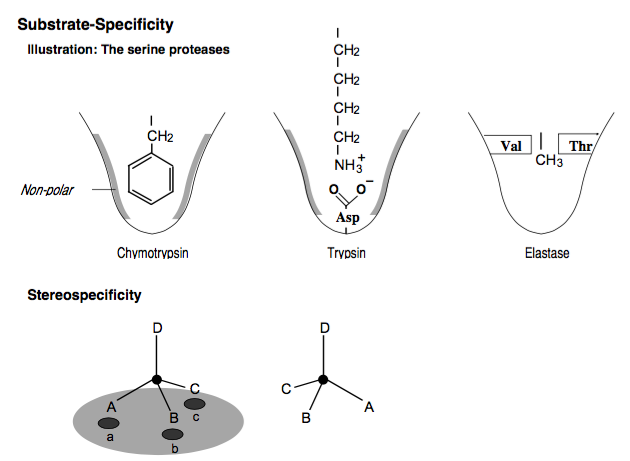 The enzymes that are relevant here are proteases, which are responsible for breaking down proteins to their constituent amino acids, which are then absorbed by the gut, and then the enzymes that would normally catabolize (break down) or metabolize (convert to other compounds) those amino acids. It is well known that the specificity of the enzymes is such that, even if the proteins were broken down to D-amino acids, these could not be used for protein synthesis.

I am not an expert in this area (‘for’ loops are more my sort of thing) but I found some pertinent references in a recent paper on D-amino acid analogues of peptides. To quote from the introduction to that paper:

A useful consequence of this is that (D)-proteins are highly resistant to degradation and have low immunogenicity (7). The fundamental change in backbone–side-chain connectivity and geometry means they are not recognized as proteins by many (L)-proteins—including proteases. Consequently, (D)-proteins are reported to have greatly increased gut, blood plasma, and intracellular half-lives (8). Better cell penetration has also been reported in some cases (9, 10).

Not the answer you're looking for? Browse other questions tagged human-biology biochemistry molecular-biology amino-acids chirality or ask your own question.

16
What happens to dextrorotatory amino acids in humans?
4
Are There Rules for How Proteins Are Formed?
16
What is the explanation for the smaller number of tRNA than codons?
2
Are all dipeptides synthesizable?
7
Classifying Polypeptides (and/or Proteins)
5
Backbone hydrogen bonds between adjacent amino acids in a protein?
1
What is the subcellular location of synthesis of non-essential amino-acids?