What is the purpose of the viscous gel in the Pacinian corpuscle?

I have read that 'when the stimulus (in this case pressure) is constantly applied, the gel repositions itself to prevent the formation of an action potential'. I don't really understand what this means.

Short answer
The adaptation process in Pacianian corpuscles (PCs) is mediated via the outer capsule. This capsule is an onion-like structure that quickly molds itself to pressure stimuli, thereby rapidly desensitizing the receptor.

Background
The Pacinian corpuscles are rapidly adapting (RA) skin receptors, as opposed to the slowly adapting (SA) ones, such as the Merkel cells. RA cells become swiftly unresponsive (i.e., they adapt) when a pressure stimulus is applied, but faithfully transmit rapidly changing stimuli (such as vibrations).

Pacinian corpuscles are specialized vibration receptors. Their dendritic region is shaped as an onion-like structure with layers of stacked lamellae: 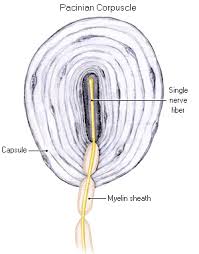 These lamellae act as high-pass filters that result in a sharp drop in sensitivity below 150 Hz (Johnson, 2001). If this capsule is dissected from the receptor and a pressure stimulus is directly applied to the sensor element underneath the capsule, the receptor response to a sustained stimulus substantially increases (Mendelson & Loewenstein, 1964). Basically, these elastic lamellae slowly mold their shape to the stimulus and pressure stimuli are only transmitted for a few milliseconds, after which the lamellae absorb the pressure. So only a one or a few spikes are generated at the start of a pressure stimulus.

You can imagine it this way, suppose you have a gel-like substance (say Play-Do) on a weight scale. Now suppose you press the Play-Do quickly and hold your finger steady at a certain point above the scale, within the Play-Do. The weight scale will shortly display a certain weight (equal to the pressure applied in Newtons), after which the Play-Do folds itself around your fingertip, and the pressure is released from the scale.

Response of Pacinian corpuscle to a sustained pressure stimulus (indentation of the skin) and superimposed vibratory stimuli. Note the vigorous response to vibrations, but the rapid adaptation to the static pressure stimulus. Source: Zavantag

Not the answer you're looking for? Browse other questions tagged neuroscience neurophysiology receptor bio-mechanics or ask your own question.

1
Molecular cause of cramps, spasms and strengthening in muscles? (incl. intro to muscle contraction)
7
What features cause mechano sensory adaptation?
4
Action potential changes in low sodium concentrations but constant osmotic pressure
10
What is the mechanism behind tinnitus?
1
How does stimulus reach neural threshold?
10
How are neurons / synapses "biased"?
11
Purpose of K+ channels in action potential
1
What is the energy cost of an action potential?
2
Why does resting potential not become continually more negative?
3
What happens in a nerve cell when a thought is generated?