What pathway would E. coli use to make pyruvate from acetate? I have found several papers that refer to a possible mechanism that could move acetate to pyruvate via a three-step process:

Is this the pathway that would be used in an E. coli system?

Several pathways/metabolic reactions are required for bacteria to convert acetate to pyruvate — or more pertinently to the gluconeogenic pathway — but the key is the glyoxylate cycle or shunt. The sequence of reactions is:

The phosphoenolpyruvate (PEP) could, in principle, be converted to pyruvate:

Although this sequence of reactions would normally be used to generate glucose etc via gluconeogenesis.

The link betweeen the TCA cycle and glucose metabolism

In addition to oxidizing acetyl CoA, the Krebs tricarboxylic acid cycle (TCA cycle) can act as source of certain metabolic intermediates for other pathways. As shown below, oxaloacetate (OAA) can be converted to phosophoenol pyruvate (PEP), in a reaction that is part of the gluconeogenic conversion of pyruvate to PEP. 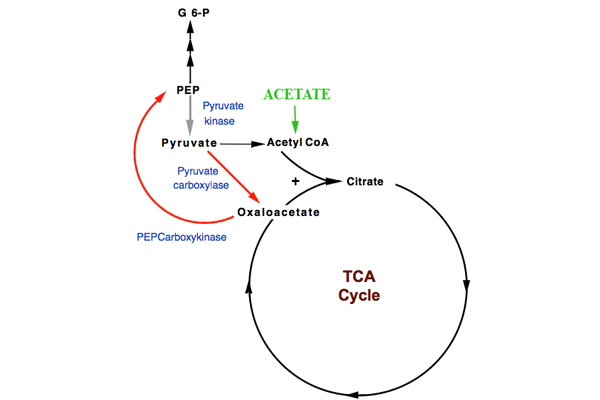 The foregoing explains why most animals cannot convert fat to glucose. (Acetyl CoA cannot be converted to pyruvate by pyruvate dehydrogenase is this reaction is effectively irreversible.) However plant and certain bacteria (including Escherichia coli) can overcome this limitation by means of the glyoxylate shunt. A text available online that explains this is Berg et al., in a section entitled ‘The Glyoxylate Cycle Enables Plants and Bacteria to Grow on Acetate’. To help clarify this I have prepared my own diagram, below. 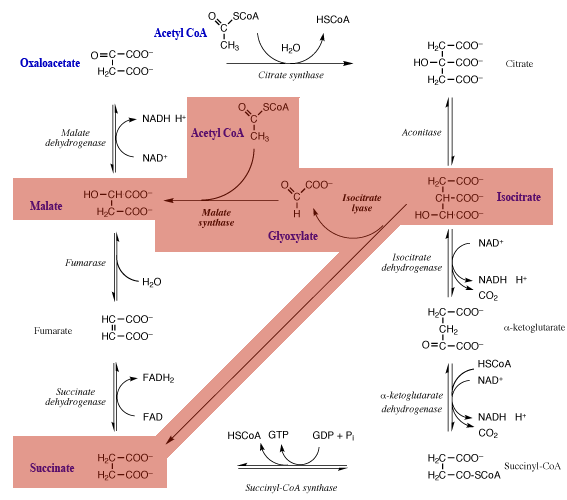 This involves the conversion:

i.e. the net conversion of

What of the glycoxylate produced in the isocitrate lyase reaction? It reacts with a second molecule of acetyl CoA to produce the dicarboxylic acid malate in a reaction catalysed by malate synthase, the second unique enzyme of the shunt. This TCA cycle intermediate is converted to OAA. This second OAA is a net gain from the metabolism and can be converted to PEP, as indicated in the first diagram.

The poster asks about production of pyruvate from acetate. This is technically possible through the pyruvate kinase reaction. However I do not quite see the point of this. I would normally expect PEP to be channeled allong the gluconeogenic pathway towards glucose.

The poster suggests a series of reactions to convert acetate to pyruvate, the final one being that catalysed by pyruvate:ferredoxin oxidoreductase. Although the pyruvate:ferredoxin oxidoreductase (EC 1.2.7.1) reaction is reversible, it generally functions to oxidize pyruvate to acetyl CoA. It is used as an alternative to pyruvate dehydrogenase by bacteria under anaerobic conditions (as it does not require NAD+), and this is regarded as its role in E. coli, and to an even greater extent in obligate anaerobes such as Clostridium.

The reverse reaction suggested by the poster, involving the synthesis of pyruvate from acetyl CoA, is restricted to autotrophs

Not the answer you're looking for? Browse other questions tagged biochemistry bacteriology metabolism energy-metabolism metabolomics or ask your own question.

4
Can the human body create glucose out of fat?

2
Aerobe or facultative anaerobe organism that metabolizes acetate?
4
Consumption of NAD+ in glycolysis
0
What happens during the fermentation process of the eco-enzyme?
5
Why isn't acetyl-coA an entry point for gluconeogenesis?
4
Glycolytic non-oxidative pathway
6
Pyruvate dehydrogenase: Apparently anomalous NAD/FAD redox reaction
4
Why is fructolysis independent of glycolysis?